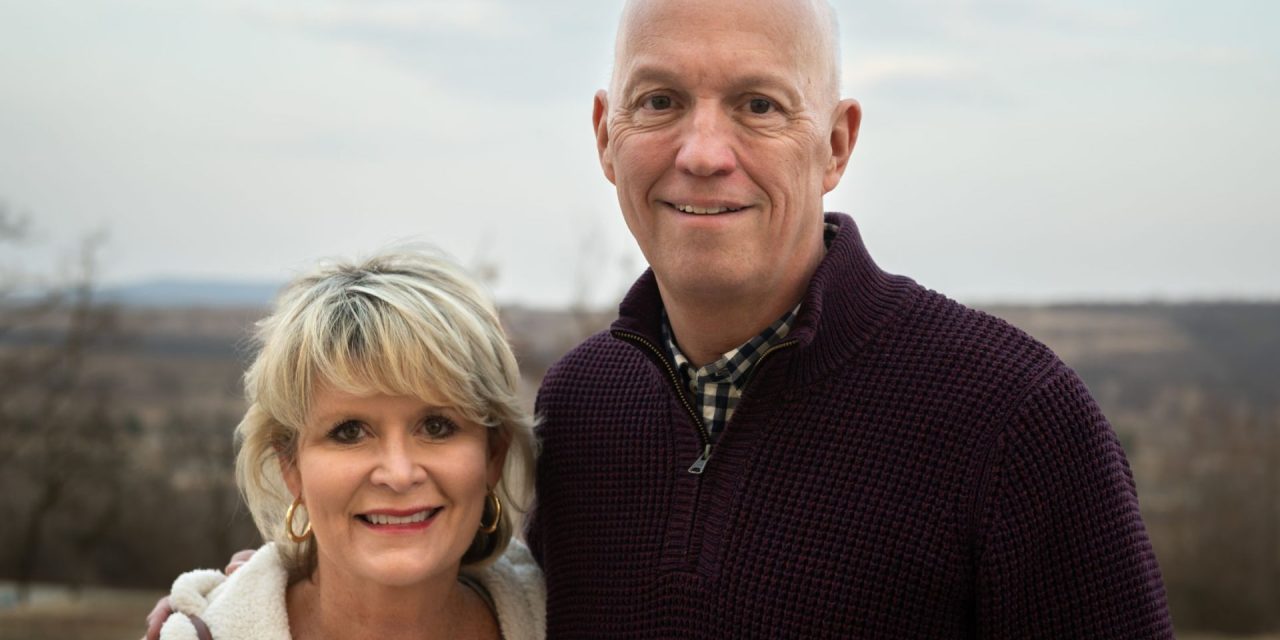 Above: David and Shannon Brown serve with the IMB in Chisinau, Moldova. The couple were commissioned from Birmingham, Ala., Meadowbrook.

David and Shannon Brown’s connections in Moldova stretch across time and the nation’s borders. 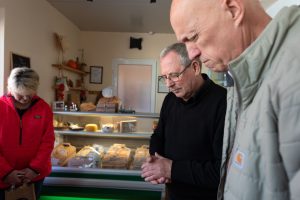 IMB missionaries David and Shannon Brown pray with Dumitru Cravcencu, the senior pastor of Dancu Baptist Church. The group met in Dancu Tabita, a cheese factory that supports the church.

These connections include Baptist pastors in western Moldova who operate a cheese factory, a Baptist medical clinic in the capital and a seminary centered on ministry in Central Asia. The Browns are also in close contact with seven villages that have no known believers.

“I wanted to retire to something, not from something,” David said.

The Lord called the Browns to retire to Moldova to serve. 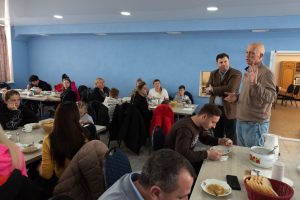 In 2014, the pastor of the Brown’s home church, Birmingham. Ala., Meadowbrook, shared with the congregation his vision to have a missionary presence on every inhabited continent. To represent Europe, David suggested Moldova. David made his first connections in Moldova in 2008 through a trip with a businessman friend.

After a vision trip in 2015, Meadowbrook formed a partnership with Dancu Baptist Church in Dancu, Moldova. Since then, the Browns have led five volunteer teams to serve in Moldova.

David and several friends lent their business skills to help Dancu Tabita, a cheese factory started by Dumitru Cravcencu. Most pastors in Moldova are bi-vocational, and Dancu Tabita provides an income for Cravcencu and many others. Dancu Tabita is recognized inside and outside of Moldova for the quality of its cheese.

Other volunteers from Meadowbrook focused on the spiritual side of the partnership.

In 2021, David took part in a disciple-making course led by the missions pastor at Meadowbrook. At the end of the training, participants were tasked with teaching the course to someone else. David asked Slavic Duman, the senior pastor at Dancu Baptist Church, if he was interested. He noticed Duman had a stunned look on his face.

Duman told David that the leader of the Hincesti region of Baptist churches in Moldova asked him to prepare and lead a training in evangelism and discipleship for the pastors in the union. Duman prayed earnestly for three days that the Lord would show him what to teach.

After completing the seven-to-eight-week class, Duman asked the Browns if they would come and lead the training. International Mission Board (IMB) missionary Elbert Smith, now a missionary emeritus, who was serving as a missions trainer in London at the time, came with the Browns, as did Tamara Moser, a Meadowbrook member who has traveled to Moldova on every trip since 2015.

On this trip, as a component of the training, Moldovan pastors, the Browns, and Lamar Schubert, a regional leader for the IMB, went to 64 homes to share the gospel in three days. In 32 homes, one or more people prayed to receive Christ.

This trip played a pivotal role in David and Shannon’s journey to move to Moldova.

“We both knew the Lord was calling us to do more,” David said.

“Lord, would you see fit to put IMB missionaries back in Moldova?” they prayed.

The morning after the Browns and Schubert’s trip to Moldova, a pastor in Kentucky called to ask if there was a place in Europe for an IMB couple whose road to the mission field stalled during COVID-19.

The Browns said they are glad to be serving with IMB missionaries Ryan and Jenni Meredith, who are now the team leaders for IMB ministry in Moldova.

This team is now the first IMB presence the nation has had in many years. Moldova was deemed “reached” in terms of the Christian population and church autonomy and ownership in the missionary task. Brown said he and Schubert recognized the potential for a powerhouse partnership with the Moldovan Baptist Union in reaching non-Christians in Moldova and sending Moldovan missionaries to the nations.

David and Shannon plan to live in Moldova for 18 to 20 months.

The team has a three-part ministry focus. The first is to expand the disciple-making efforts started in Dancu to the entire Hincesti district. The goal is to reach many others for Christ and eventually plant new churches where none exist today.

The team is working with Emanuel Baptist Clinic in Chisinau and coming alongside Eugenia Podoleanu, the executive director of the clinic, and Gusac Liviu, the clinic’s president, as their staff meets both physical and spiritual needs in the capital and other cities. Meadowbrook provides funding for medical supplies used in community health outreaches. Send Relief funds are currently being utilized in the clinic to assist refugees.

The second focal point of the team’s ministry is the Orhei region of Moldova. David and Shannon are partnering with a local pastor to reach the region’s population of 50,000 with the gospel. David estimates there are seven villages in the area where this pastor lives, with a combined population of 10,000 people and no known Christians.

Their third focus is building relationships with University Divitia Gratiae, a Baptist seminary in Chisinau. The seminary is involved in sending missionaries to Central Asia. Though Moldova is a small country, the number of missionaries the country sends is anything but small.

David said they are the “eyes and ears on the ground” for Send Relief projects aimed at helping Ukrainian refugees through the local Baptist churches. Their first months in Moldova were quickly committed to joining Moldovan Baptists in ministry to Ukrainian refugees. The Browns have spent hours in vans, traveling with Duman and Ion Miron, the executive director of the Moldova Baptist Union, to visit churches, Baptist camps and Emanuel Clinic that are housing and caring for refugees. In April, the Browns hosted Send Relief leadership.

David and Shannon’s days are full, but so are their hearts. Their retirement looks different from the average American’s – and that’s just what they wanted. Learn more about missionary roles and durations of service.