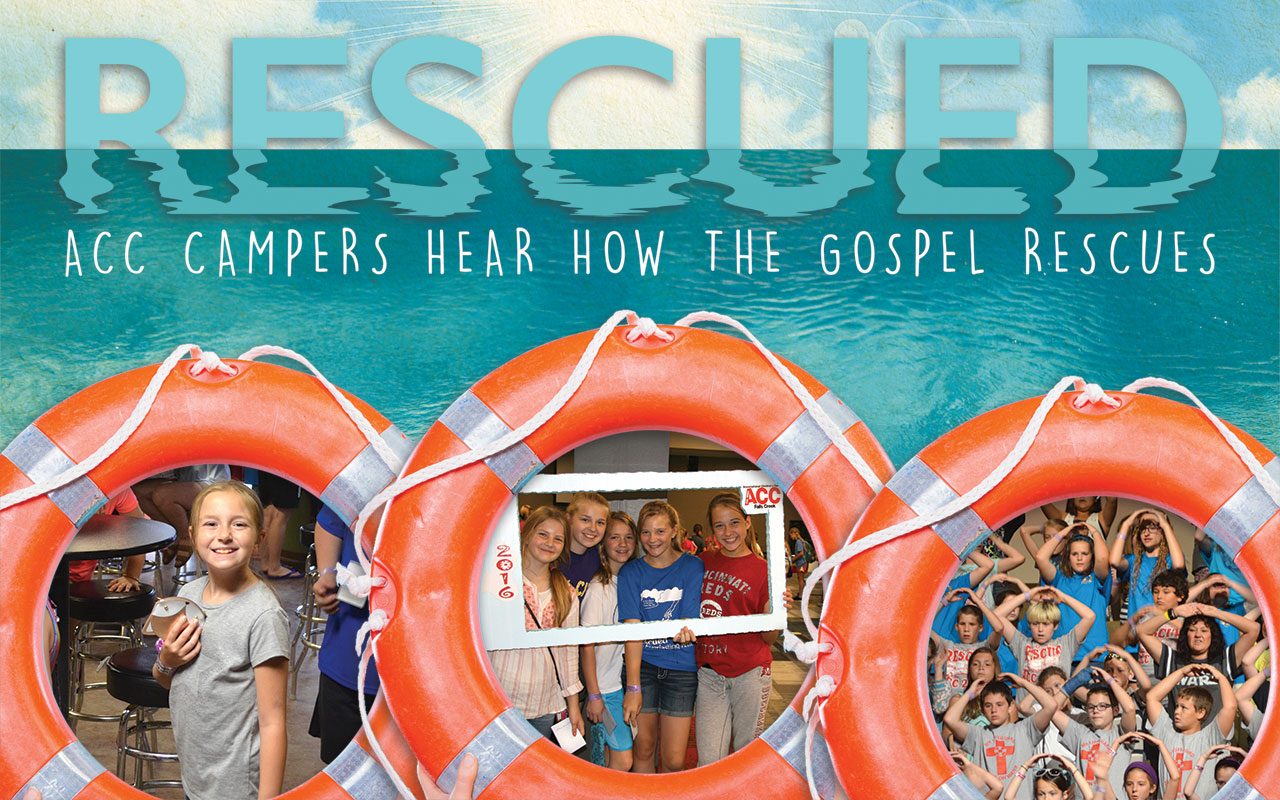 DAVIS – The theme for Associational Children’s Camp (ACC) this year was “Rescued,” based on Matt. 14:30-31 and referring to Jesus rescuing Peter from sinking. Just as Peter was saved from the sea, many campers, grades 3-6, made salvation decisions that were projected to be a record high in ACC’s 37-year history.

Joe Ligon, pastor of Marlow, First, was camp pastor for the opening camp, May 26-June 1 at Falls Creek Baptist Conference Center. On the first night of inviting campers to make spiritual decisions, 210 made professions of faith among the 316 total decisions.

The invitation time experienced a unique situation, as campers came on to the stage instead of remaining on the floor. Though camp leaders were excited about the decisions for Christ, they did not expect that many young people to come on the stage and were careful to communicate where campers needed to go for the following services.

“Joe is doing a great job, having a lot of fun with the kids and presenting the Gospel in a clear, understandable manner,” said Tim Green, director of missions for South Canadian Association, who served as ACC business manager.

Green also reported 4,034 campers and leaders registered for the opening camp and could surpass ACC’s combined record attendance of 7,189, after the second camp on June 1-4. The second camp, which featured Charlie Blount, pastor of El Reno, First, as camp pastor, was beginning at the time of publication.

“Camp has gone very smoothly,” said Green. “The churches I have spoken with have said they have been very happy. We also have a larger number of missionaries than we have had before.”

A highlight of ACC is “Missionfest,” which happens in the afternoons during camp. Campers are able to connect with missionaries from the International Mission Board. ACC featured a record high of 10 missionaries this year.

Green reflected on a time in the past when he had a conversation with James Lankford, former Falls Creek summer program director and current Oklahoma U.S. Senator. Green and Lankford were standing outside the Missions Center, and Lankford said to Green, “I think it’s pretty interesting that there are more kids lined up to go to the Missionfest than there are at the concession stand.”

“That’s indicative of the ACC,” said Green who pointed out that ACC is open to any Southern Baptist church in Oklahoma. “We certainly want them to go to their own associational camp or CrossTimbers (Mission Adventure Camp), to have a camp experience or to have multiple camp experiences, but we would invite them to at least consider ACC, especially if they haven’t been before or haven’t been recently.”

The worship services at ACC were led by the Garry McNeill Worship Band. McNeill is the pastor of Cherokee, First, and the band featured members from Durant, First. Ken Bartholomew, music minister at Durant, First, led the children’s choir, which was an important part of the evening worship services.

Jason Langley, director of conference centers for the Baptist General Convention of Oklahoma, gave a good report on the ACC, as the two camp sessions offer the summer staff an opportunity to work before the regular summer student weeks begin.

“ACC has been a great partner with us,” said Langley, “so it’s been real good that our staff have been able to work with grace so as we are figuring things out. They (ACC staff) have been gracious working with us.”

Langley also is pleased with how well the summer staff, which increased in number, has been working and preparing for the upcoming busy weeks.

“We’ve had staff orientation at Falls Creek and CrossTimbers,” he said. “I’m very impressed with the staff we have this year. We have a lot of returners. And those who are new are picking up their skills very quickly and taking their responsibilities very seriously. I have a great deal of confidence we will have a great summer.”