Messenger: Thanks for joining us, and we’re excited about your upcoming time at the Evangelism Conference. You’re going to be leading worship several times, including the Night of Prayer (5 p.m., Jan. 29 at Del City, First Southern), Monday morning’s Senior Adult Session, Monday afternoon and evening, as well as Tuesday. But you also are leading a breakout session Tuesday morning about the link between worship and evangelism. Can you preview that breakout topic?

Charles Billingsley: The two great functions of the church are evangelism and discipleship. I really believe that discipleship is what breathes evangelism. The people who know the Lord, who are growing closer to the Lord, better reach people for the Lord. Part of that experience of discipleship and growth is an authentic experience in worship. Not just among believers but also among non-believers. 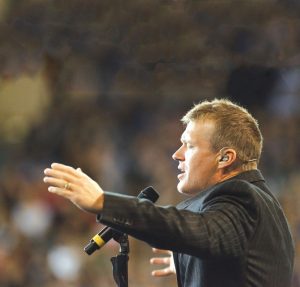 A former member of the Christian band NewSong, Billingsley has headlined more than 3,000 concerts and released 24 recordings as a solo artist.

There’s something incredible that happens in the mind and heart of somebody who doesn’t know the Lord when they are in a worship environment or worship service on, say, a Sunday morning at a local church. When that person walks in, and they can sense an overwhelming presence of the Holy Spirit, something that may be completely foreign to them. They don’t know how to describe it. A lot of them will just start to cry, which I have seen many times.

They don’t know the church, they don’t know the Lord. But they know something’s different. When they see the joy on the faces of the choir or the band or singers or people in the congregation, that is an incredible draw. I always tell Christians, “If we ourselves don’t enjoy worship and the presence of God, how can expect others to as well?” I personally believe what sparks an evangelistic movement is the worship itself. Not because non-Christians are participating, but because they sense something different, and they want what that is.

Messenger: What at worship trends are you seeing across the country?

Billingsley: There’s certain trend setters out there. Guys like Chris Tomlin and the Passion event and Hillsong United, for example. The trend, honestly, is continuing down this road we have been on for some time. We went through a shift from songs that were to an audience to songs that are with an audience. Songs instead of about God to songs that are to God.

I think it struck a really pleasant place in the heart of believers in the sense that maybe church music isn’t only about listening, but participating in it. I think that’s more biblical and gives a glimpse of heaven. I’m excited to see that the trend is not only continuing down that path but expanding. We are moving a little away from your typical three-to-four chord songs and getting more complex with them and a little more creative.

These things always tend to shift like a pendulum. We went through several years where it’s not necessarily cool to have a choir, but at the same time, I’m starting to see more choirs again, which is great.

It’s a different kind of choir. Not necessarily the choir that stands there (wears) robes and delivers an octavo. Instead it’s a worship choir, a bunch of believers who have a passion for worshipping God and hoping to engage the congregation. That’s the way I use our choir at Thomas Road (Lynchburg, Va.), where I serve. This can be a powerful experience.

You don’t see choirs in every church, and it’s not the majority. But when you do use a choir right, it can add tons of energy to the service. Plus it creates an opportunity for many people in the church to participate. There’s really lots of trends going on, which are great and exciting. But we have to make sure our production doesn’t override the priority of seeking the presence of the Lord. Production of a service should enhance the service, not overwhelm it.

Messenger: You were talking about the heart of worship and drawing people in. People are familiar with your music, your award-winning CDs, about which people are familiar. But what many don’t know is that several years ago, you had a medical scare that God carried you through. Could you talk about that chapter of your life?

Billingsley: The medical scare was part of the reason I’m so focused on the presence of the Lord now. I was facing the possibility of never being able to sing again. I had developed a 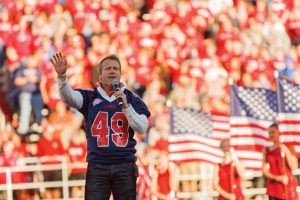 Charles Billingsley sings during a halftime performance at a Liberty University football game. He is an artist-in-residence and instructor at the Lynchburg, Va. school

polyp on my left vocal chord, and those things don’t go away. They just feed themselves. It was either a miracle or surgery.

After several weeks of prayer, I kept having to turn down events and opportunities to lead worship, including at my own church. So I finally just had to make a decision to go through with a surgery. I found a specialist. I did a laser procedure, and it was awesome.

All the time leading up to that, I was a nervous wreck. I wasn’t sure if I’d get to sing again, and you hear the horror stories. I was very scared. In fact, the night before we left, we had a big prayer service at my house. I invited people I knew who would cry out to God on my behalf.

You know, that struck me so powerfully in the heart. I told him as honest as possible, “I think so, but I don’t know.” I didn’t have any other plans. If I’m not singing or leading worship, I don’t have any other skills.

I went and had the surgery, and after that, I had five days of pure silence, even to sneeze. During that time, it fell over a Sunday. I couldn’t lead worship, so I went to a place near my house and began to cry out to the Lord. I feel like He spoke to me and showed me what it means to worship.

You don’t need a song. You don’t need an instrument or even a voice to worship. Worship is so much more than singing songs and playing music. It’s so much more than a style of song, it’s more than a modern chorus or ancient hymn. Worshipping the Lord is you simply loving God with your whole mind, soul and strength. I came back to my first love that day. God reminded me that my voice is not my source. He alone is. I told the Lord, “If you gave me my voice back, I will change my priorities.” It has been amazing to see what God has done since that day. He is awesome!

To pre-register for the 2017 SEC, visit www.bgco.org/sec. There is no cost to attend. To hear the full interview, visit www.baptistmessenger.com/insight.