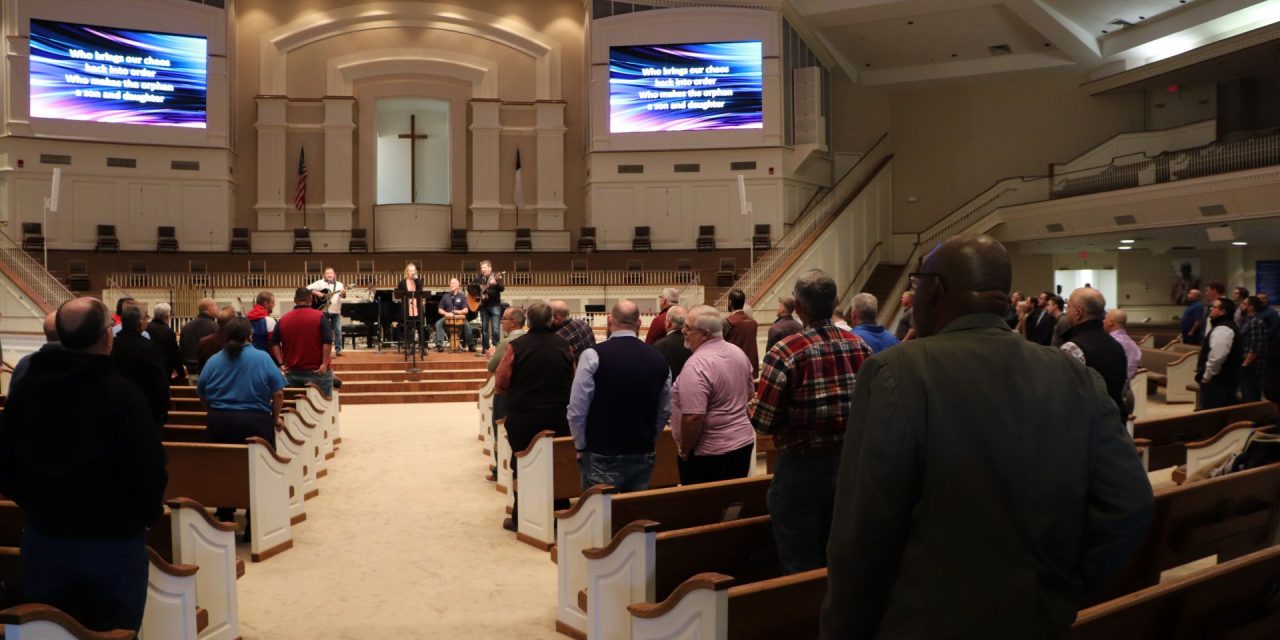 The Priority of Preaching Conference met for the 10th consecutive year on March 1, with a record-setting attendance of 205 at Oklahoma City, Southern Hills. The previous attendance record was 177. 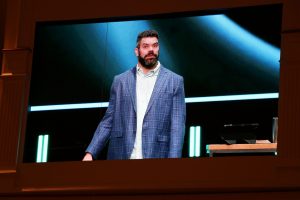 Robby Gallaty spoke via livestream at Priority of Preaching.

Robby Gallaty and Steven Smith were the conference speakers and offered instructions based on the book they co-wrote titled, “Preaching for the Rest of Us.”

Gallaty, who is pastor of Hendersonville, Tenn., Long Hollow, was unable to attend in person due to flight cancellations and addressed conference attendees through livestream.

“Obviously, we can’t ‘send the fire.’ God sends the fire, but we can stack the wood,” Gallaty said in his introduction. “I want to show you some things that we can do to prepare our hearts for God to do a work in us before He ever does a work through us.”

Gallaty is known for founding Replicate Ministries, which specializes in helping churches with discipleship ministry. He spoke at Priority of Preaching about how to be a better communicator of God’s Word. 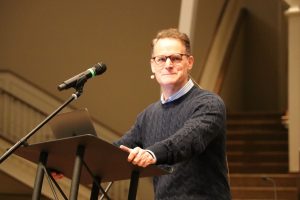 Steven Smith made his fourth speaking appearance at Priority of Preaching.

Smith made his fourth appearance at Priority of Preaching. The pastor of Little Rock, Ark., Immanuel previously served as vice president for students services and communications and is the son of Bailey Smith, former longtime pastor of Del City, First Southern.

Smith addressed the purpose of delivering text-driven sermons. “God has not called us to preach; He’s called us to represent Scripture. We don’t preach sermons; we preach texts.”

Smith emphasized that text-driven sermons are not application-driven or theologically-driven. “Text-driven preaching,” he said, “is the interpretation and communication of a biblical text in a sermon that represents the structure, substance and spirit of the text.”

The Bible should be at the heart of what a preacher is delivering to a congregation, Smith said. He stressed the importance of preaching being a product of worship.

Danny Ringer, director of missions in Great Plains Association, commended this year’s Priority of Preaching and shared why he believes it was the largest-attended meeting.

“I think there are two reasons,” Ringer said. “Number one, I think our pastors were ready for fellowship. This pandemic has been difficult on pastors. They’ve had the burden and responsibility of making these incredible decisions week after week of having church, not having church or having church online. There has been a lot of stress placed on our pastors, so I’m not surprised at all that it is the highest attended.

“The other reason is it’s a great conference,” Ringer said. “I think the speakers, Steven and Robby, did a phenomenal job. One of the ‘jewels’ I walked away with came from Robby when he said, ‘A pastor needs to have the heart of a child, the mind of a theologian and the skin of a rhinoceros.’ That was a very true statement because sometimes we forget that pastors are human, and we have all these expectations coming from congregations on a pastor who is fallible and human. But God has chosen these men, through the Holy Spirit, to lead our churches. They do need to set time to be the pastor and study and be prepared for the incredible responsibility that a pastor has to preach the Word.”

Ringer also described how Priority of Preaching stressed the importance to present the Bible.

“(Preaching) isn’t an entertainment time for pastors to hear themselves,” Ringer said. “It’s not a comedy hour. It’s an opportunity to convey God’s Word. The (conference speakers) honed in on that in a great way.” 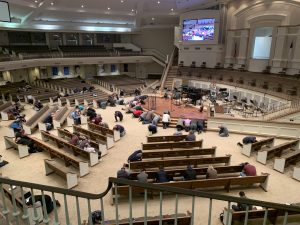 A spontaneous prayer time happened in the afternoon session.

The afternoon session of the conference allowed for a spontaneous prayer time. After Gallaty’s second time to speak, Brett Selby, regional ministry partner for Oklahoma Baptists, led an “unscripted” prayer session that led to pastors in attendance to kneel before God throughout the sanctuary.

Selby also was pleased with the result of this year’s Priority of Preaching.

“The conference was an excellent blend of heart and hands of pastoral ministry,” he said. “‘Hands’ is represented by the skill training that the conference offered, but ‘heart’ is a reminder that preachers need to prepare themselves before preparing their message.”

Sessions of the Priority of Preaching Conference will be available for downloading in the coming weeks by visiting oklahomabaptists.org/priority.