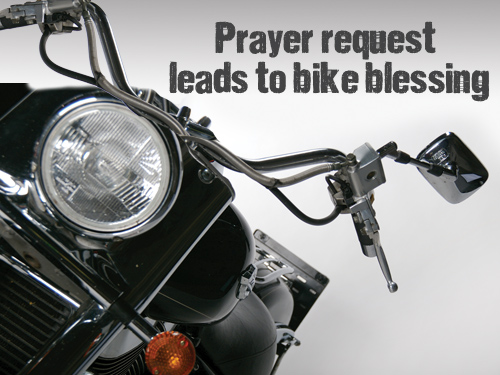 MUSTANG—Karen Watts never imagined that when she simply asked the F.A.I.T.H. Riders at Mustang, Chisholm Heights to pray for her husband, Terry, while he was deployed to the Middle East  in 2011, it would lead to an “Extreme Makeover: Motorcycle Edition.”

No, Ty Pennington, star of the recently cancelled television program, “Extreme Makeover: Home Edition,” had anything to do with it. The formula included a concerned wife, two dozen or so members of the F.A.I.T.H. Riders Sunday School class at Chisholm Heights, the scriptural model of the unified body of Christ working together and the generous donation of a rusty, weather-beaten 1972 Honda 450 Scrambler motorcycle that seemed destined for the scrap heap.

Ron Deak, president of the Mustang Heights F.A.I.T.H. Riders chapter, said Karen Watts approached the Sunday School class and asked them to pray for Terry, a deacon at the church, who was deployed to Kuwait Feb. 1, 2011.

“F.A.I.T.H. Riders have become strong in our church, and she felt she could trust us to pray for her husband,” Deak said.

That trust proved itself in far greater ways than Karen Watts ever imagined.

The F.A.I.T.H. Riders knew Watts owned a 1972 Honda that he had been given by Jim Shipman, another church member. They also knew it was in pretty bad shape, to say the least. But, bike guys being bike guys, they knew a challenge when they saw one and they took it on, hoping to get the Honda restored for Watts when he came home in November. It took eight months, but the job was completed in time as the entire class pitched in, each helping in one way or another, including raising funds to help pay for parts and materials.

“Several guys came up with parts and paint and it was basically the church body at work to rebuild this bike,” Deak said.

“We tore it all the way down to the frame, and then built it all the way back up to where it looks new. We presented it to him during the Sunday morning service, Dec. 4.”

Deak said the project not only gave the F.A.I.T.H. Riders the chance to do something for Watts, but it also opened doors to share Christ along the way.

“As we bought parts, raised money or planned the presentation, we were able to tell not only the story of the bike rebuild, but also tell our suppliers and folks involved about how God was moving in this project. It was a great witness,” he shared.

The Dec. 4 presentation went on without a hitch, and Watts never knew what hit him.

“We called him down to the front to thank him for his service, and the congregation gave him a standing ovation. And the F.A.I.T.H. Riders presented him with a vest,” Deak said.

Watts said to say he was surprised by the presentation is “an understatement. It was phenomenal what those guys did. Absolutely phenomenal, considering the condition of that old motorcycle. I had told my wife basically it’s about time to see what we can get for it at the scales, it was in that bad of shape. It was not economically feasible from my perspective when I was considering trying to work on it to even approach fiddling with it.

“I tried for a couple of months tinkering with it and  it was just so far gone.

“But those guys with their vision and their drive and  the people they knew in the motorcycle world, they were able to get what they needed and they fixed it. I’m just astounded that they were able to do what they have done because it’s just absolutely gorgeous.

“They went beyond fantastic with the work. I so appreciate how they came together as a group and chose that as a ministry and the impact that it has had, not only for me, but obviously for others as well.”

Watts has had a lifelong affection for motorcycles. He had owned another Honda, a 1974, 500 since high school, but it was destroyed by fire several years ago.

“I had it in my barn at the back of our property, and when we had some grass fires roll through Mustang six or seven years ago, it destroyed all of our outbuildings, my camper trailer and my motorcycle—basically everything but the house,” he said. “It wasn’t covered by insurance, so I just wrote it off as one of those life experiences.”

That’s when the Honda 450 entered the picture.

“A year or so later, I was talking to Jim Shipman and he said, ‘Well, if you want to work on one, I think I have one that you can look at and if you’re interested, you can have it.’

“So we went out to his pasture and we looked at it, and I said, ‘You know, that’s a project, but  let me give it a shot.’ It had been sitting out in a pasture for probably eight years under a piece of sheet metal. It got rusted up pretty good. It looked pretty much like what a mud dobber’s house does. It was gone.

“If it was just me, I don’t think I would have ever got it running. But those guys, they just kept working on it. I think if I had been on their crew, I would have said this thing needs to be in the landfill,” he laughed.

“But they stayed to it and they got the thing done. A fantastic job.”

Watts was deployed last Feb. 1 initially to Kuwait. He has served in the Navy Reserve for 23 years, and was called back to active duty. His rank is E-8, or Senior Chief.

“We used to be called storekeepers, but are now called logistics specialists,” he said, noting that he hopes to serve two more years and retire with the rank of E-9, Master Chief, the highest he can attain.

“I went to Kuwait, and then they forward deployed me to an Air Force base in Qatar,” he explained.

“Basically my role was to make sure the sailors were administratively taken care of by the other branches of the military who were using them in various roles, such as working on computers and so forth.

“I was assigned to the Warrior Transition Program,  which I feel is a ministry because it not only is taking care of people while they are there, making sure when they arrive that they get to where they are supposed to be, that they get their pay and other issues are addressed correctly, but also more importantly, when it comes time for them to go home, the WTP gives them a departure briefing that gives them principles of transitioning, including going over stress management, and giving them a basic tool set for transitioning home in a healthy way.

“The Navy, like all of the services, is very concerned about their people coming home and suffering from stress and Post Traumatic Stress Disorder. The WTP is set up to help reduce and mitigate that as much as possible.”

Watts returned home Nov. 18. In civilian life, he works for the Federal Aviation Administration at the Logistics Center in Oklahoma City as a logistics management specialist. He said he loves his job.

“We get to work with all of the automation and communication equipment used in the air traffic world,” he said.

He credits his wife, Karen, with keeping mum about the honor at church.

“My wife did a great job keeping this a secret,” he admitted. “She told me they wanted to acknowledge my service. I thought it would be a nice gesture with some sort of a small plaque or something, and  I would have been just thrilled with that.

“They had me facing the screen on the platform and Ron was acknowledging me and showing a power point of the guys working on my bike. I was really impressed. Then,  they had me turn around and there was the bike in really pristine condition.

“I was blown away! I told them it was so far above and beyond anything that I would have ever expected, and I’m just so grateful for their vision to do that. It was just incredible.

“I told them it was perfect model of the spiritual principle of Christ’s body of many parts coming together and working as one. They really blessed me by that.”

“After the presentation, the F.A.I.T.H. Riders were joined by Keith Burkhart, family & men’s ministries specialist with the Baptist General Convention of Oklahoma, to pray for Watts and over the bike to ask God’s blessing on not only Terry,  but also the new tool he has to tell others about Christ,” Deak said.

“As F.A.I.T.H. Riders, we want our bikes to be used as tools for spreading God’s Word. This one certainly will. What a story it has. What once was old, lost and beyond hope—as all of us who are now saved through the sacrifice of our Lord, Jesus,  once were—is now new and will be used as a tool for the Gospel.”