Prayer prevails on the playing field 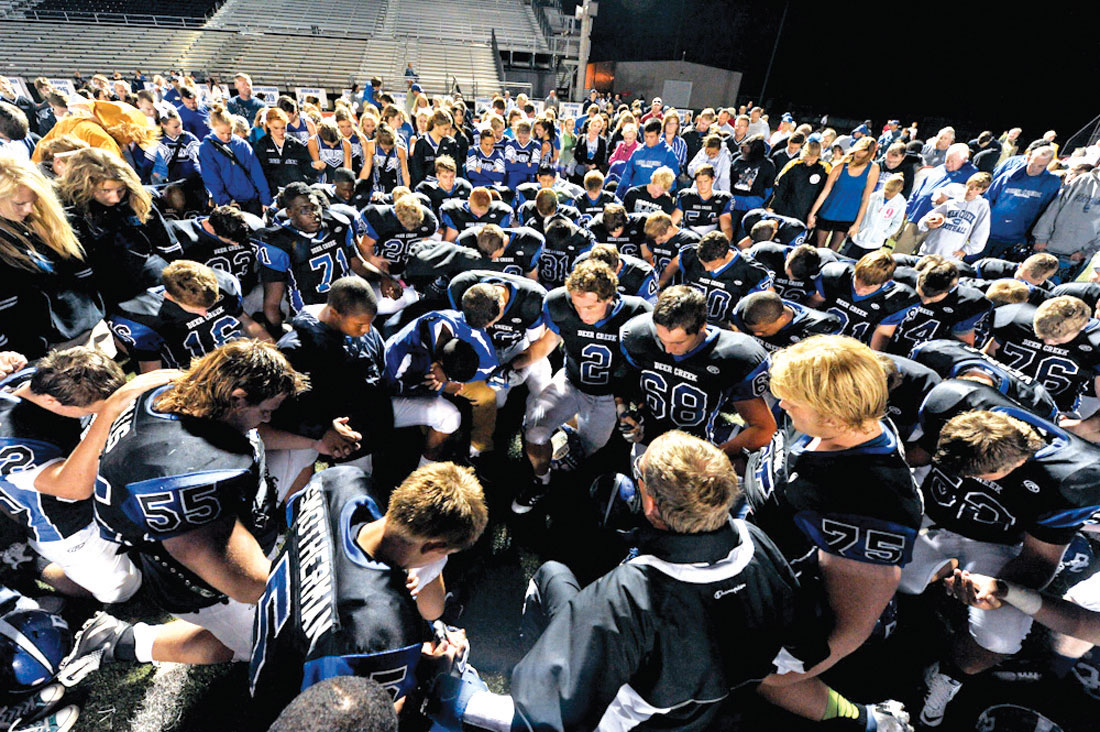 Joe Kennedy is an assistant high school football coach in Bremerton, Wash. who has made a tradition of praying on the field after every game. Kennedy has been put on administrative leave from the team because he continued his post-game prayer after he was told not to do so.

Kennedy’s dismissal made national news. It was even addressed on the U.S. Senate floor by Oklahoma Sen. James Lankford. In a 13-minute address, Lankford provided many examples of public prayer on the football field. He also best describes how Americans observe religious liberty, “We’re not a nation that is trying to purge all faith. We’re a nation that allows people to live their faith.”

In 2013, the Baptist Messenger featured a story on Deer Creek High School Football Coach Grant Gower and his involvement in doing something similar to what Kennedy was observing.

“As the student body would gather and the players would hold up their helmets during the fight song, the cluster of people on the field began to grow,” the article stated in the Sept. 5, 2013 Messenger. “Gower said everybody would stick around for the team’s postgame talks, including cheerleaders and family members, and then this spontaneous congregation would join in a time of prayer.

“’The circle of people started to be about 20 yards and grew to even 60 yards on the field,’ said Gower. ‘It’s not required of anyone. We just open it up for our community to come and join us. It wasn’t necessarily planned. It was a great demonstration of how our community is involved with our team in prayer.’”

Recently, Gower shared his thoughts about the situation Kennedy was experiencing in Washington. He admitted it can be challenging for Christians to live out their faith today.

“My words would simply be of what Christians have historically faced. Here in this era, we don’t face the same type of animosity in biblical times, but it is not favorable for Christians today,” said Gower. “My words (to Coach Kennedy) would be to keep the faith and continue doing what you believe in because that’s what Christ commanded us to do.”

Thankfully for Gower and the Deer Creek Antlers, they have been able to continue their observance of prayer after games. They even have a traditional prayer time when they play Guymon.

“Guymon is in our football district,” Gower said. “Over the past three years we have brought both teams and communities on the field and shared a time of prayer. It’s interesting to see two communities come together like this from two different areas of the state, Oklahoma City and Guymon. It is two teams just concluded playing 48 minutes of football. We have won every game we’ve played against them, but it’s not about a win or a loss, it is about two communities banding together for a common cause.”

Though Deer Creek has observed prayer after games, prayer has been a controversial issue with the Oklahoma Secondary Schools Activities Association (OSSAA). The governing body had a policy that did not allow student-led prayer at high school playoff athletic events.

On Nov. 11, OSSAA changed its policy to allow schools to observe a moment of silence before postseason events. This decision was influenced by Oklahoma Attorney General Scott Pruitt who met with the OSSAA’s board of directors to amend the policy.

“This decision is a victory for the right of all Oklahomans to freely exercise their religious beliefs in accordance with the First Amendment of the U.S. Constitution,” Pruitt said in a written statement. “I commend OSSAA and its officials for making the change to accommodate the religious liberty of Oklahoma students and parents.”

State Rep. Bobby Cleveland has been an advocate for changing OSSAA’s prayer policy.

“I am glad that the OSSAA was willing to seriously consider the Attorney General’s opinion and that common sense prevailed in this case,” said Cleveland in a written statement. “This is a win for religious freedom and our Oklahoma values.”

Gower also appreciated the recent ruling. “It is a great testament to the OSSAA acknowledging this is what’s acceptable,” he said.

Prayer will continue to be something Gower will stress and observe throughout his coaching and teaching of students. One example he gave involved how one of his players asked Gower to pray for his grandfather who is seriously ill, and Gower considers it a privilege that students offer him prayer requests.

Gower also said he finds it interesting how at certain times public prayer is acceptable.

“It seems like, after tragic events, prayer is more allowable,” he said. “Take for instance the situation at Oklahoma State University at homecoming when those people were killed. Coach (Mike) Gundy and his team prayed on the field, and it was interesting that the coverage of that was such a positive light. Unfortunately, it seems like that’s when it’s OK to pray, but when times are good, people find it offensive.”

Nevertheless, Gower remains faithful to pray and is grateful for the support he has to do so.