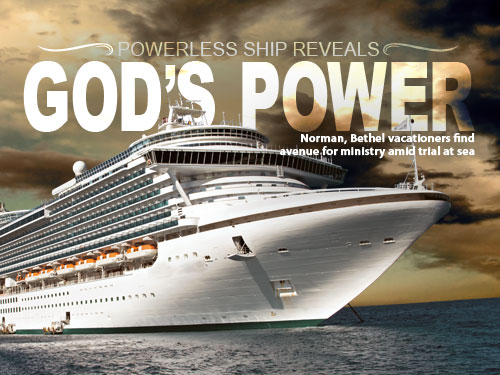 Editor’s Note: This story is a compilation of an article by Doug Hill, The Norman Transcript, and an interview by Messenger editor Brian Hobbs. 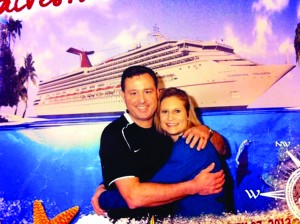 Keith and Carmella Morren pose for their official cruise photograph.

The couple, members of Norman, Bethel, chose an ocean voyage to celebrate their 20th wedding anniversary. Carmella is a special education teacher at Norman North High School, and Keith is a technology specialist for Hitachi Computer Products America Inc.

What was supposed to be a four-night odyssey began Feb. 7 aboard the Carnival Cruise line’s vessel Triumph. After the one and only scheduled stop in Cozumel, Mexico, the trouble began. When they were back out to sea, a fire knocked out the ship’s propulsion and also made the sewage, heating and air conditioning systems inoperable. The Triumph was adrift, and the Morrens wouldn’t touch terra firma again until Feb. 14 at Mobile, Ala. They made it to a New Orleans hotel room at 5 a.m., Feb. 15.

“It was pretty crazy,” Keith Morren said. “But we made the best of it and tried to stay positive.”

The couple resolved that, after misfortune struck, having a negative attitude would achieve nothing. Getting through the ordeal with an upbeat attitude was their goal.

Back home, Bethel members prayed for their safety.

“They have been faithful members of Bethel for more than seven years. We were diligently praying for them as they were going through this event and so excited they are OK,” said Mark Hensley, the church’s administrative pastor. “Further, we are proud of the Christian character they showed as they represented Christ on the ship. “

“We decided to focus on the positives as the best way to get through it,” Keith said. “We were amazed that the crew was so good.”

Most of the ship’s hands were European, representing dozens of countries. Most passengers were American. Morren called it an experience of a lifetime.

“It was difficult but you know what, we’re Christians,” he said. “There were so many negative attitudes around and we were just determined not to be like that. We heard so much negativism from others and certainly didn’t want to contribute to it.”

Each night, they did an exercise of listing at least 10 positives and realized that things could be a whole lot worse. They prayed and got a group of fellow passengers together to draw inspiration from each other. The first night’s gathering was around 25 and it grew to 200 by subsequent meetings.

“The crew kept us fed, and we had clean water,” Carmella Morren said. “The emergency lighting stayed on. Those crew members did everything they could possibly do to make us comfortable.”

They could shower, but the toilets didn’t flush, which she termed the worst part. 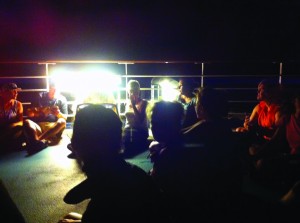 The Morrens help lead a Bible study up on the jogging track.

Differing from other reports the Morrens described eating lobster, steak and chicken.

“Anyone who says they just ate onion sandwiches is wrong. If so, they had that by choice,” Carmella said. “It wasn’t always hot or served buffet style, but there was plenty of food. We ran out of ice, but had coffee, soft drinks and clean water.”

Other ships pulled alongside the Triumph to deliver supplies and some helicopters dropped food down to them.

“We met a couple of girls and agreed that there needed to be a Bible study group,” Carmella said. “People were crying and some had health issues and even Keith was out of medicine. Fortunately we all made it, through the Lord’s strength.”

The special education teacher instinct took over,  and Carmella identified people who could use her assistance.

“I ran errands for people and helped one lady with heart problems,” she said. “It’s just what I do, and it took my mind off things.

“We just decided to have a revival for God,” she said. “Can you imagine the power of prayer by 3,000 people?”

The ship’s crew announced the Bible study meeting, and they met on the jogging track in the early evening. Those assembled prayed and sang hymns.

“The lights went out for a short time but the stars were as bright as I’ve ever seen them,” Carmella said. “Almost immediately after we prayed, it was announced we were going to Mobile instead of Progreso, Mexico, which was a blessing in itself.”

The Morrens made friends for life. Lists of contact information were passed around.

“Even though it was terrible, I wouldn’t trade it for the world, because the time was so powerful,” she said. “God enlarged my courage, and we made friendships that will last for eternity.”

“I don’t think that will be our last cruise,” Carmella said. “After meeting all those people and being able to glorify God at a time like that was a sign to me that I can do all things.”