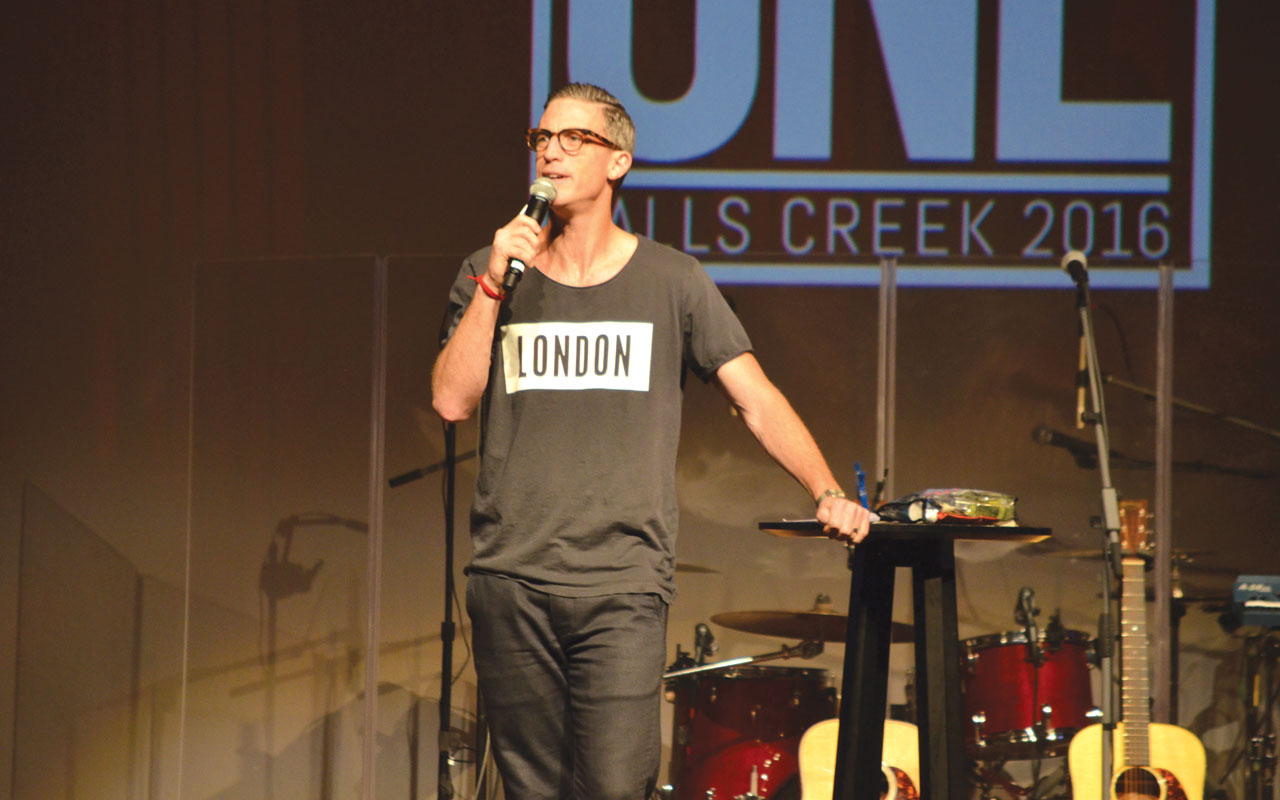 DAVIS—Ed Newton remembers the call he received from James Lankford more than eight years ago. He thought it was a friend pulling a joke on him.

“With this booming voice, he goes, ‘Ed Newton?’ I said, ‘Yeah?’ ‘James Lankford, director of Falls Creek. I’d love for you to come speak at the largest Christian camp in the world.’ I just laughed and said, ‘Who is this?’” Newton said, recalling the first time he spoke to the now-Oklahoma U.S. Senator.

Growing up in Florida, Newton never heard of Falls Creek Baptist Conference Center. He made a profession of faith as a senior in high school, and God worked in his life to be an itinerant evangelist starting in 2003. The phone call from Lankford started a stint that made Newton one of the most popular speakers in Falls Creek’s history, as he has spoken every year for the last eight years and has been camp speaker for two weeks in the last five years.

When asked what draws him to come speak during the Falls Creek summer weeks every year, Newton said, “Friends become family over a period of time, and Falls Creek is family. I’ve watched many of these students become counselors and give back. That’s the joy—not only watching them be a camper but come back and contribute. That’s what makes Falls Creek so special.”

As an itinerant evangelist, Newton’s schedule was such that he could commit to speaking annually at Falls Creek, and because he became so popular is why Andy Harrison, Falls Creek program director and student ministry specialist for the Baptist General Convention of Oklahoma (BGCO), asked him to be the camp speaker for two weeks in the recent years.

“Ed has been with us for quite a while,” Harrison said. “He’s an excellent preacher who comes prepared every year, preaches from God’s word, and his sermons are never the same. I don’t hear Ed use the same illustrations over and over again. Everything that he has done he has brought an original sermon each year. That’s part of the reason he is back year after year.”

Newton recently changed roles, though. Since January, he has become the senior pastor of Community Bible Church in San Antonio, Texas. He said he has been working with the church for about five years, speaking at different events at the church, as well as being a frequent guest speaker for worship services.

He knew God was calling him to pastor, but Newton said he did not make that calling known publicly. He did not know when and where God would have him pastor, but this calling was prevalent in his life.

“I told a few people, but I didn’t want anybody to refer me,” he said. “I needed it to be from God.”

The founding pastor of Community Bible spoke with Newton about becoming the church’s senior pastor, and Newton knew it was God telling him this was his next role in ministry. Just through working with the church, Newton concluded he wanted to pastor a church similar to Community Bible, as he described it being multi-cultural, multi-generational and missional. When asked to be the next pastor, Newton knew the timing was right.

“It’s been a great journey. I’ve jumped on a moving treadmill,” Newton said.

“When he told me that he was pastoring, I was happy for him,” said Harrison. “There’s a guy who has been on the road (as a 12-year itinerant evangelist), and that’s a grind. His children are young, and he’s such a family guy – loving on Stephanie his wife and his four kids. I’m sure becoming a pastor gave a little stability to the years where he needs to be home more and helping with his children. I’m excited for him, and I’m excited for that church because they got a great leader.”

Though Newton has become a full-time pastor, he still plans to make appearances at Falls Creek, but he will only speak one week each summer, starting in 2017.

“As I go forward, I will only do a few (speaking engagements),” he said. “My daughter said ‘Just keep doing Falls Creek.’ I am committed to Falls Creek, but I will only do one week.” Newton also said his 13-year-old daughter London wants to attend Oklahoma Baptist University in the future.

“I am so grateful for the BGCO, Dr. J (Anthony Jordan, BGCO executive director-treasurer), this team (Falls Creek summer program team),” said Newton. “I want to say a special thanks to all these churches that believed in me, supported me, rallied around me, encouraged me. They were a part of my journey, and I’m very thankful.”

Newton was the speaker of the opening week of Falls Creek summer camp. He will be returning for Week 7, July 18-22.