PHOENIX, Ariz.—Southern Baptists from around the nation and world gathered in Phoenix, Ariz., June 13-14, for the annual meeting of the Southern Baptist Convention (SBC). More than 5,000 Messengers to the SBC meeting, as well as many guests, took part in times of fellowship, worship and prayer, heard Scripture readings and sermons, conducted business matters and more.

The theme for the 2017 SBC Meeting was “Pray! For such a time as this,” and was led by SBC president Steve Gaines, pastor of Cordova, Tenn., Bellevue. Gaines, who was nominated for a 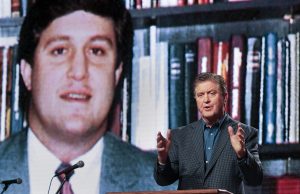 Gaines made a great emphasis on prayer during the SBC Meeting.

second one-year term as SBC president and approved without opposition, delivered his president’s address on Tuesday morning, preaching out of the book of Acts.

Gaines addressed how the evangelism in Acts offers refreshment and empowerment for believers in the world today. “I don’t want to live a life of dullness or dryness,” Gaines said. “I want to live a life that is anointed by the Holy Spirit of God. We must minister to others with the Gospel.”

In addition to Gaines’ reelection as SBC convention president, numerous other officers were elected.

Messengers elected Paige Patterson as the 2018 convention preacher, Kie Bowman as the alternate preacher and Mark Blair as the convention music director.

There were 135 registered messengers from Oklahoma to the 2017 SBC Meeting, as well as many other guests and visitors. Oklahoma Baptists shared in times of worship, fellowships and business proceedings. 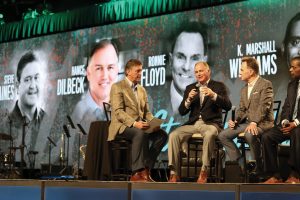 The following Oklahomans were nominated to serve the SBC in 2018: Chad Choat, a member of Claremore, First and Scott Watkins, pastor of Kingfisher, First.

The following Oklahomans are still serving on SBC committees: On the Executive Committee, Mike Scrifres, a member of Eufaula, North Folk, and Hance Dilbeck, pastor of Oklahoma City, Quail Springs.

Serving on the North American Mission Board (NAMB) committee are Blake Gideon, pastor of Edmond, First, and Rick Frie, pastor of Jenks, First. Serving with Lifeway Christian Resources, Blake Lindley, a member of Norman, Trinity, and Greg Kannady, a member of Kingfisher, First.

Serving on the Local Representation Committee is Bryan Pain, pastor of Duncan, First.

On Wednesday afternoon, Dilbeck appeared on the program in a “President’s Panel on Stewardship.”

Messengers passed nine resolutions on Tuesday (June 13), on topics repenting of prayerlessness and calling for leaders to practice biblical morality. That evening, the resolutions committee took up a tenth resolution, one the Committee previously rejected that was to denounce the “Alt-Right” movement, which espouses white supremacist and racist messages.

The Resolutions Committee initially chose not to report out the proposal to messengers. After strong urging from the initial author of the resolution and others, the committee reconvened during the evening, however, and asked the Committee on Order of Business for time Wednesday to present a new resolution, which was approved overwhelmingly by Messengers on Wednesday (See page 2 news story).

In addition to the Resolutions Committees, numerous other committees gave reports. Reports and videos were heard and shown from SBC entities and SBC seminaries.

On Tuesday evening, International Mission Board (IMB) President David Platt led a special IMB presentation, where he said, “There is an inherent problem” if believers only carry the Gospel to people in the places they live. Churches, he said, must send missionaries to share the Gospel in places it has never been heard.

The stage is set for Southern Baptists to begin increasing their number of international missionaries, Platt said, but “such sending will involve sacrifice” by churches and individual believers.

Following Platt’s message, a series of newly-appointed IMB missionaries shared their testimonies of being called to the nations. The missionaries dispersed throughout the meeting hall, and Messengers gathered around them for prayer.

The event started with prayer for the nation and then attendees experienced a night of worship with musical artists NEEDTOBREATHE, Trip Lee, MercyMe, Jordin Sparks, Phil Wickham and Brennley Brown and heard a gospel presentation from Laurie.

By the end of that evening, Harvest reported 2,904 salvation decisions at the event with another 494 indicating decisions online. Many attendees had been invited to the crusade by friends, neighbors, coworkers, family members or even strangers.

“Every moment has a series of defining moments—moments that shape us and change and make us the person we are today,” Sandy Wisdom-Martin, newly-elected national WMU executive director said.

The Fellowship of Native American Christians (FoNAC), which was established by Southern Baptists in 2008, met in Phoenix for its annual meeting. Gary Hawkins, executive director of FoNAC, called their 2017 meeting “our best yet” and talked about the great focus on evangelism and prayer.

AVANCE 2017 drew Hispanic Southern Baptists from across the nation on Monday (June 12) prior to the SBC annual meeting to encourage more Hispanic congregations and their pastors to mobilize for missions.

Also connected to the SBC Meeting was the 2017 Southern Baptist Convention Pastors’ Conference, June 11-12 at the Phoenix Convention Center. Pastors were encouraged and edified through the preaching of expository messages from the book of Philippians.

With the theme “Above Every Name,” the Sunday evening and Monday morning sessions focused on issues such as our dependence on Christ, hope and joy through adversity, finding identity in Christ, obedience, Christian unity, and beholding Christ’s name and example.

Leading worship throughout the Pastors’ Conference were Keith and Kristyn Getty.

By the conclusion of the 2017 meeting, between times of various votes, motions, resolutions, reports and budgets, Southern Baptists walked away with a renewed urgency to pray and share the Gospel. Plans are now underway for the 2018 SBC Annual Meeting next summer in Dallas, Texas. By God’s grace, the SBC will continue rising after Phoenix and beyond.