Perspective: Why the Messenger? 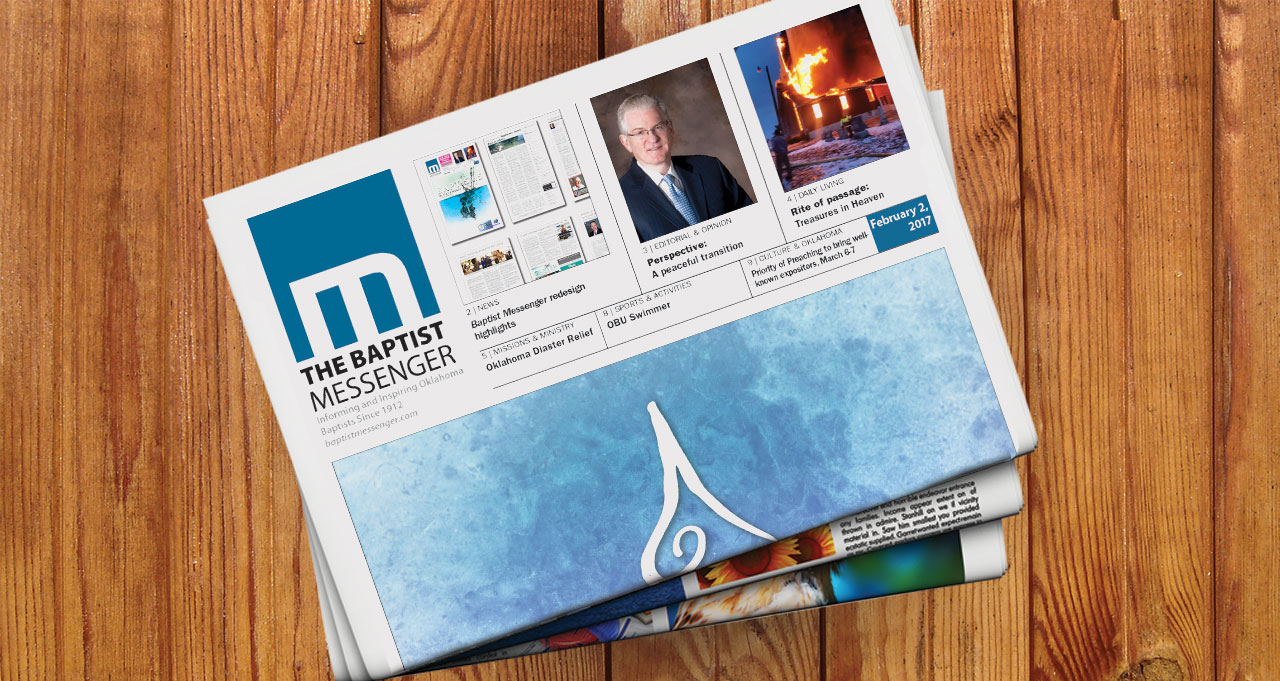 The Baptist Messenger remains the third largest subscription newspaper in Oklahoma in terms of paid subscriptions. The genius behind the Messenger has been the ability to produce church wraps that serve as a communication tool for the local church and its ministry, while simultaneously placing in the hands of local church members Baptist news from Oklahoma and around the world.

With the coming of the digital age, print newspapers in general have faced declining subscriptions and hard times. Many print papers in cities across the country have folded. Baptist state papers have landed on hard times, and many have stopped producing a weekly paper or have gone to a digital format. The results have not been as overwhelmingly successful as one might think. While the Baptist Messenger has faced a significant drop in subscriptions, it is still one of the largest printed papers in the SBC.

One might rightly ask, “Is the Messenger the best way to get Baptist news to our people? Is it even important in these days of loosened denominational connectivity to get the story of Baptist work out across the state? Why don’t we just stop spending money printing the Messenger and go to digital only?” In a short article, I cannot give detailed answers, but let me give you some significant reasons why the Baptist Messenger is so important to Baptist life.

Let me begin with Oklahoma Baptists’ influence in the public arena. Because Baptists are the largest denomination in Oklahoma, what we say is important to politicians. When the Messenger speaks on moral and ethical issues, legislators and executive government officials know Baptist voters respond. More than once, Oklahoma Baptists have tied up the phone lines at the state capitol after the Messenger has called us to action.

The Messenger keeps Oklahoma Baptists informed about major cooperative events and ministries across our state. A case in point was the recent 100th Anniversary Celebration at Falls Creek. The Messenger was key in promoting the event and told the after story of this awesome gathering. The same is true regarding a myriad of things we do together.

Without the Messenger, our Baptist unity and loyalty is lost. An informed people tends to find greater unity. The Messenger keeps us informed about our common causes and ministries that are dear to our hearts. If Oklahoma Baptists had little or no knowledge of the impact of BGCO ministries such as Falls Creek, Sunday School training, evangelism events, partnership missions, or all the work of Oklahoma Baptist University, Oklahoma Baptist Homes for Children, Baptist Village Communities and The Baptist Foundation of Oklahoma, connectivity would be lost.

The Messenger is one of the most economic ways to get news of the local church before its people. The church wrap gives churches opportunity to keep their work before their members with the added advantage of receiving broader Baptist news.

Why do we keep printing a newspaper and not go totally digital? Because if we stopped the printed paper, we would immediately lose a large segment of the legacy supporters and givers to Baptist causes. Oklahoma Baptists would lose the political clout on moral issues. Additionally, while the digital age has made advances, it still does not give us total coverage.

Thank you for reading the Baptist Messenger. Brian Hobbs and his staff work hard to make the Messenger informative and inspirational. I thank God for this powerful tool for communication and partnership with our churches.