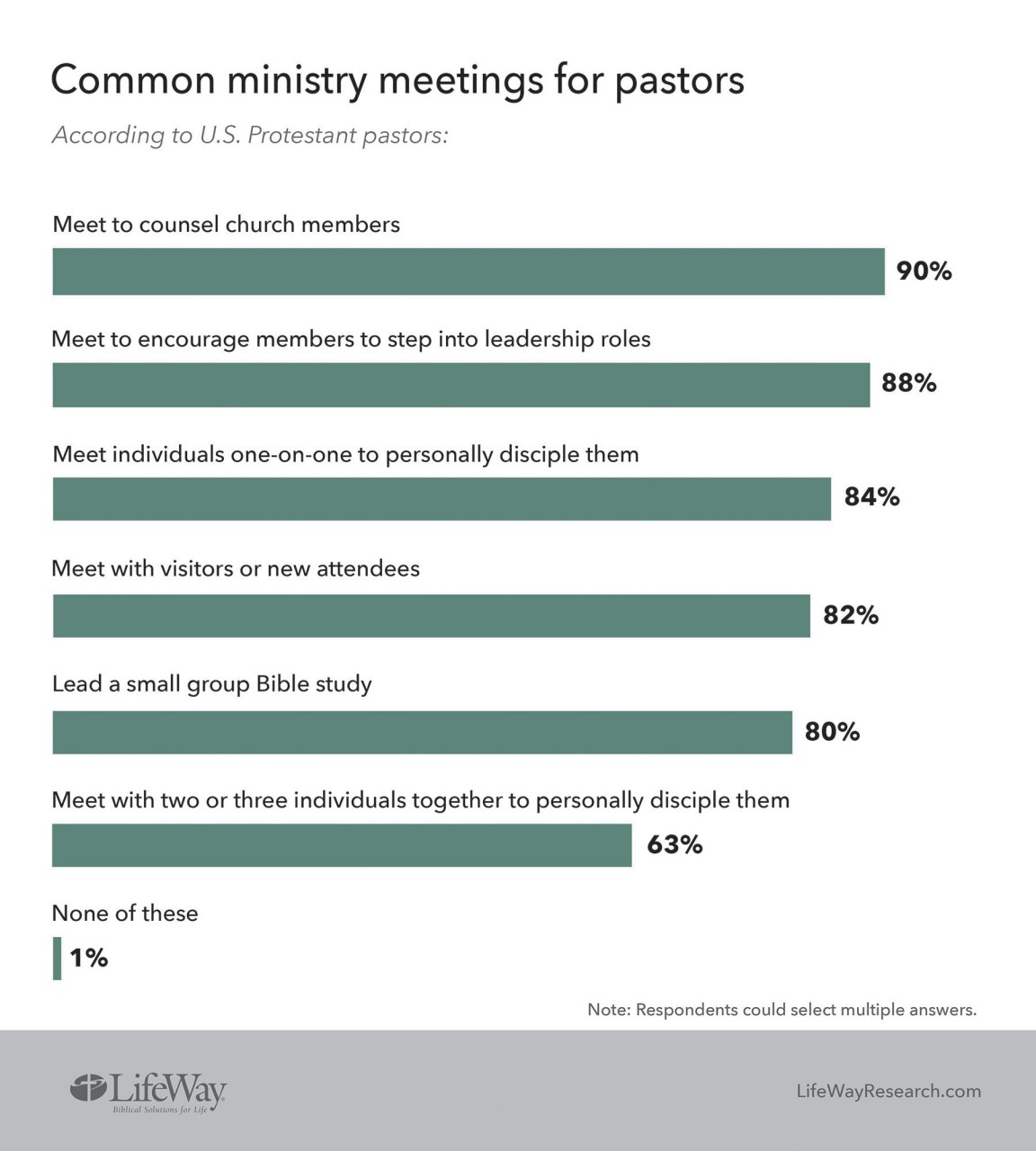 NASHVILLE, Tenn. (BP)—Meetings often fill the calendars of office workers, but pastors say their days are often full of meetings as well.

“Churches are people, and church ministry is people ministry,” said Scott McConnell, executive director of LifeWay Research. “It is not surprising that pastors participate in many meetings, but the nature of those meetings varies.”

In an earlier LifeWay Research study on mental illness, 10 percent of pastors indicated they have a graduate degree in counseling or psychology and 38% had taken graduate school courses in counseling.

Another previous study from LifeWay Research found that 76 percent of pastors say they refer church members to a professional counselor if they require more than two counseling sessions.

“Pastors have opportunities to give spiritual counsel as well as advice on many other life issues,” said McConnell. “Pastors of larger churches have more people under their care. While they may have additional staff, the senior pastor is still the first person a churchgoer confides in during difficulties.”

Close to 9 in 10 Protestant pastors (88 percent) say they regularly meet to encourage members to step into leadership roles.

Pastors 65 and older (82 percent) and those in churches with attendance of less than 50 (79 percent) are the least likely to say this is a regular part of their ministry.

More than 4 in 5 pastors (84 percent) say they meet with individuals one-on-one to personally disciple them.

Around 4 in 5 (82 percent) say they meet with visitors or new attendees.

Protestant pastors in the South (85 percent) are more likely to do so than those in the Midwest (79 percent).

Pastors 65 and older are the least likely to regularly meet with those new to the church (73 percent).

Presbyterian or Reformed (86 percent) and Baptist (85 percent) pastors are more likely to say they have these meetings than Pentecostal pastors (74 percent).

Those who lead the smallest congregations (73 percent) are the least likely to say this is part of their regular ministry.

Pastors younger than 55 (82 percent) are more likely to lead such a small group than those 65 and older (74 percent).

A clear majority of Protestant pastors (63 percent) also say they have regular meetings with two or three individuals to personally disciple them.

Again, larger church pastors, those of churches with attendance of 100 to 249 (68 percent) and those with 250 or more (67 percent), are more likely to establish regular small group discipleship meetings than those at churches with less than 50 in attendance (55 percent).

“Some may think pastors of larger churches spend less time directly with people, but they are just as involved in ministry meetings and more of them actually meet regularly with people for counseling and small discipleship groups than in smaller churches,” said McConnell.

For more information on this study, visit LifeWayResearch.com or view the complete report.

The phone survey of 1,000 Protestant pastors was conducted Aug. 29 to Sept. 11, 2018. The calling list was a stratified random sample, drawn from a list of all Protestant churches. Quotas were used for church size.

Each interview was conducted with the senior pastor, minister or priest of the church called. Responses were weighted by region to more accurately reflect the population.

The completed sample is 1,000 surveys. The sample provides 95 percent confidence that the sampling error does not exceed plus or minus 3.2 percent. Margins of error are higher in subgroups.