Pastors experience ‘A Day of Encouragement’

Gathering Nov. 10 prior to the 108th Annual Meeting of the Baptist General Convention of Oklahoma, at Oklahoma City, Quail Springs, state pastors were called on to encourage one another at the State Pastors Conference. 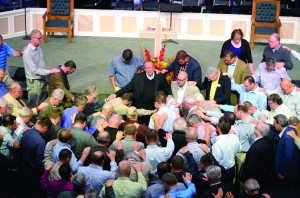 Tom Elliff, center, led in prayer and the laying of hands on Shane Hall.

Dilbeck, in opening the conference, used Jer. 20:7-18 as his text, focusing on the prophet Jeremiah’s decades-long messages concerning the demise of Jerusalem, and his lament after he has been released from his public humiliation in the stocks.

“We see some lessons or truths from Jeremiah’s prayer in his time of disappointment,” Dilbeck stressed. “First, our discouragement often comes from unrealistic and unbiblical expectations . . . . the gap between our expectations and our experience results in disappointment.

“Jeremiah also teaches the value of honest expressions. He teaches us that we can express our feelings to God in prayer. Can God handle that kind of prayer? Well, he already knows (how you feel).

“Third, Jeremiah teaches us to set the anchor of faith. In verses 11-13, he never casts off his faith.

Henry, who has been in the gospel ministry since 1960, spoke on “being a faithful shepherd in tough times,” using several texts.

“How do we stay faithful?,” he asked those present, and then outlined four ways.

“First, our call (to ministry) is certain,” he said. “We are appointed to serve. Sometimes, the only thing that keeps us going is the reality of the call of God. Second, we have a compassion that is unrelenting; shepherding is never outdated.

“Third, we have a command to lead.”

Finally, he said, to stay faithful, a pastor must, “Have conduct that is exemplary.”

Unfortunately, Henry pointed to statistics that showed that many pastors have failed in this area. He said, “The things that can get us are pride, power, possessions, promiscuity and pornography.”

Lang urged the pastors present to “Seek out the sinners. We’re here—the broken. Point us to the hope that you have.”

Elliff led the afternoon session speaking on his life verse II Tim. 1:12. He said for years he ignored the first part of this verse.

“Therefore, says the Apostle Paul, I have suffered these things,” Elliff said, reading from his Bible and saying he focused on the latter part which speaks on the triumphal statement. He said churches today have created a “suffering-less brand of Christianity.”

Elliff openly shared about how his wife, Jeannie, has been going through chemo treatments and how he had to trust God through this process, saying to God, “She’s yours.” He then concluded his time allowing for those in attendance to pray over Shane Hall, pastor of Del City, First Southern, who is going through treatments for stomach cancer.

Akin spoke from Heb. 12:1-3, encouraging attendees to “run the race,” with the reminder they are not running alone.

“This text teaches us very clearly it’s fine, it’s right to find encouragement from your brothers and sisters as you and I are running in this race,” said Akin. “Don’t you get where you can’t be held accountable. You just glue your eyes to Jesus. You stay close to Him. He’s already promised to stay close to you. And I promise you this, He’ll help you run well today, and He’ll help you run well tomorrow, and indeed He is more than sufficient to get you to the finish line so that you can indeed finish the race well.”

Floyd concluded the Pastor’s Conference and presented a word of confidence that “God is able.” He said to not give in to the Devil or the voices of others who offer discouragement. He made a great emphasis on how God has done and can do what seems impossible.