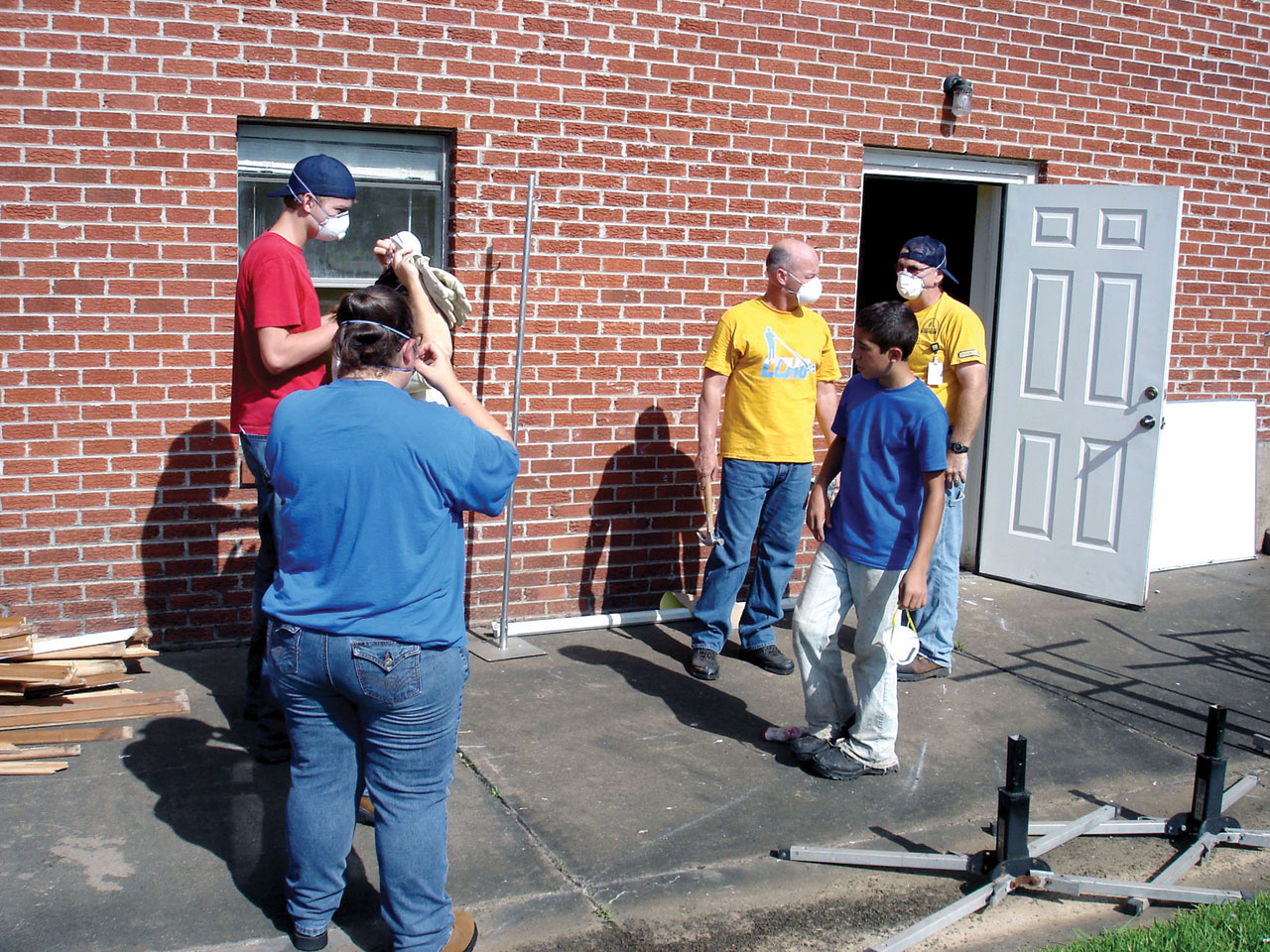 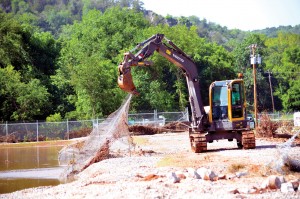 The fence is pulled out of the lake at the Falls Creek wastewater facility after the Washita River destroyed it. (Photo: Bob Nigh)

After almost 70 days of directing the Baptist General Convention of Oklahoma’s (BGCO) response to spring storms and heavy rains,  (BGCO) Disaster Relief Director Sam Porter said he has hopes of closing the books on the effort by the third week of this month and giving his volunteer base some rest.

“I hope to have it wrapped up in a couple of weeks,” he said recently, but we still have 37 (mud out) jobs yet to do.”

And, that was after Oklahoma disaster relief volunteers and their counterparts from 11 other states had completed more than 620 mud out, debris removal and chain saw jobs across the state, with the possibility that the list could grow.

“On the lake (Texoma), there are still places not accessible to our assessors,” Porter said. “There are a lot of homes still flooded, many which were never close to the water before.”

The relentless rain has prolonged the response to unseen levels, Porter said, citing an example.

“Two houses were assessed one Friday and they were dry. An Alabama team went out on Monday to do the mud out and when they got there, the  residences had been flooded by more rain over the weekend. One had more than four feet of water in it, and the other was under more than seven feet of water,” he said.

Porter said the floods have been catastrophic, even though the damage is somewhat “invisible.”

“In flooding, people don’t see the damage, because you don’t see debris everywhere. But I believe economically, statewide, it’s devastating.”

As mentioned,  trained DR volunteers have come from 11 states, including Alabama, Arkansas, Florida, Kentucky, Louisiana, Michigan, Mississippi, Missouri, New Mexico, Tennessee and Texas to help with the response. Young volunteers with World Changers and Bounce ministry from Texas, Alabama and Oklahoma also have pitched in to help, as have volunteers from Depew, First and Quinton, First and Baptist Collegiate Ministry groups.

Porter said more than 1,725 volunteers have donated more than 20,000 man hours in Oklahoma since May 5.

Since May 5, BGCO feeding units have prepared more than 39,000 hot meals, with about half of those being paid for and served to victims by the American Red Cross and Salvation Army.

“Since the week before Memorial Day, the BGCO has paid for the rest of the meals out of our general funds,” Porter said.

Thus, this year’s response has been more costly than normal, he added.

“People don’t give as much to support flood recovery. Even the Red Cross and Salvation Army have trouble raising money for floods because it’s not a visible disaster,” Porter explained. “You walk up to a house (after a flood) and you might be able to smell it, but you can’t see it from the outside—it’s hidden in the walls, which most likely are covered by life-threatening mold.

“We have had very few donations, even though this flooding has been just as catastrophic as the 2013 tornado outbreak because it has been statewide.”

The impact to the convention—especially its conference centers, was immense. BGCO Executive Director-Treasurer Anthony L. Jordan addressed it in an appeal for DR donations posted on the BGCO website:

“After a tornado hits, there is an immediate media frenzy. Pictures of devastated areas and misplaced families are everywhere,” Jordan wrote. “Tornadoes cause damage in concentrated areas, and it is easy to see the powerful destruction they bring.

“God’s people, filled with compassion, start sending funds for disaster relief within hours of a tornado. Media prominently shows our Baptist General Convention of Oklahoma Disaster Relief units and workers. Other Southern Baptists from across America are on display, and people respond generously with financial help to meet the needs of ministry to victims.

“When a historic flood strikes our state, media tells the story, but the pictures are limited and then the reporters move on quickly to other news. Footage of flood waters across roads and fields turned to lakes catches our attention, but not always our hearts. It takes days for the flood waters to recede and the devastation does not leave as clear a debris path; however, the destruction is by far wider and broader than the damage caused by a tornado.

“Thousands of homes and businesses across our state, particularly in southern Oklahoma, have been destroyed or severely damaged by the floods. Our own Falls Creek and CrossTimbers took direct hits, causing damage that will reach beyond a million dollars. The new $4.5 million wastewater plant at Falls Creek sustained a direct hit from flood waters. Our buses, fire trucks, heavy equipment, and maintenance barn were flooded with several feet of water. While insurance remunerations will help, we still face the distinct possibility of several hundred thousands of dollars of uncovered damage.”

The Oklahoma Municipal League issued a report on July 7 which said 79 municipalities reported estimated storm damage since May 5 in excess of $29.7 million, with the biggest hits  centered on bridges, roads and water systems.