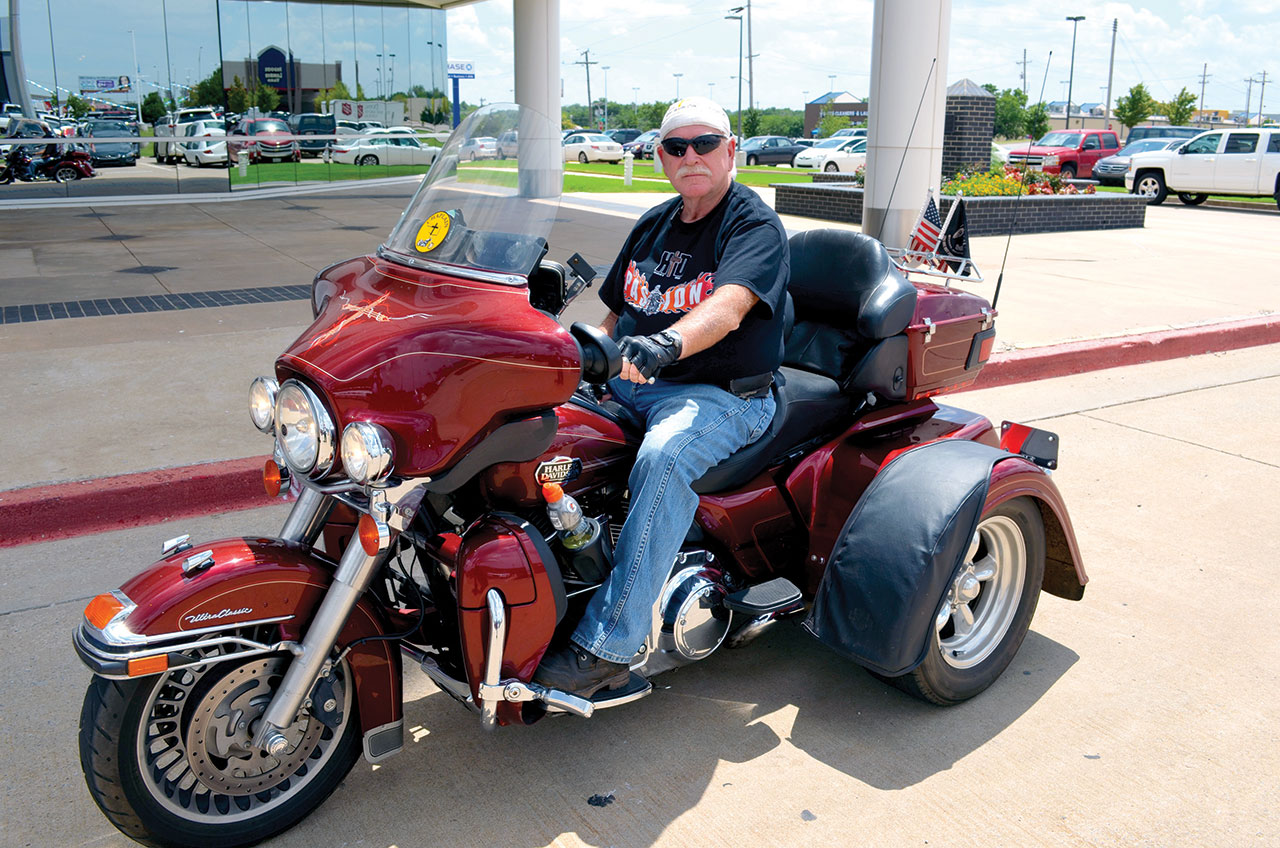 In the past decade, Don Hunter has had two open-heart surgeries, 35 heart catheterizations and 13 stents inserted into his arteries. Still, that hasn’t prevented him from having a God-called heart for ministry to one of America’s most misunderstood and feared sub-cultures—biker clubs.

Hunter is the senior chaplain with Oklahoma Chaplains for Bikers, which just celebrated its 10th anniversary of ministry to biker clubs across the country, including the most notorious of them—the “Hell’s Angels” and “Mongols.”

“The first rally we attended was in a little pasture in June of 2005  in Southern Oklahoma,” Hunter said.  “We went to Sparks (Okla.) the next year and then to Sturgis in 2007.”

The 63-year-old pastor of Oklahoma City, Grand Boulevard, rides a 2009 Harley-Davidson Ultra Classic Trike to bike rallies. His motorcycle is a far cry from the four-legged, hay-eating rides he grew up with.

“I grew up riding horses and doing rodeos,” he laughed. “I had a younger brother who came out of my mama’s womb on a Harley. He has ridden motorcycles forever; I didn’t. I had ridden bikes some, off and on, but not a lot. I was a rodeo cowboy; that was it.

“So, when God called me to do biker ministry, I thought, ‘Man, that is not my calling, that can’t be. I was pastoring a church; I had just helped start a church just east of Moore.”

Another detriment, he thought, was his work background.

“Number one, I had a strong law enforcement background between the military and private life,” he said. “And at the time, I was with the Cleveland County Sheriff’s Department as a reserve deputy and their chaplain, and, you know, that’s a dangerous combination (with bikers).

“But, God works those things out. Normally, if you let anyone know that you have a law enforcement background, you are a marked person. But, God has protected that all along. I’ve never been dishonest about it, I’ve let people know that, and I’ve never once had any flack over it; it’s just been amazing. And, we deal with some hard core biker clubs who know that.”

Hunter and his “group,” which includes only two other members right now—John Dries of Oklahoma City, Classen Boulevard, and DeWayne Byers of Claremore, First—often are criticized by others for daring to reach out to bikers.

“Jesus never hung around the tabernacle very much,” Hunter stressed. “He said, ‘I didn’t come here to take care of the people who are well, I came here because of the people who are sick and need a doctor.’ I prayed long and hard before I answered that call to go into biker ministry. I have actually been chewed out; yelled at by other Baptist ministers who said I didn’t have any right to be out there.

“Jesus went to places where there were prostitutes and the tax collector. He was there because there were people who needed Him.

“We don’t go there and tell people when you get straight, come see us. We roam around visiting people at their campsites and the vendor stands, and we’re consistent. Bikers, especially, want to know, ‘Oh, you’re not just here one time and gone. You’re not a fly-by-night. You’ve been here every time.’

Hunter knows ministry to bikers can be intimidating.

“This is not for everyone. I tell people who want to try this if you’re not called to it, you will not last. The language you hear, the sights you see, the things that go on will drive you crazy. You have to be completely open to just about everything. Not that you have to accept it, but you can’t look at it and automatically condemn, because if a biker sees you condemn them with your eyes,  with your body language or just your voice, they will never, ever talk to you again. “

The Oklahoma Chaplains for Bikers try to go to five major rallies each year—Sparks, Texas Rally in the Crater, Route 66  in Depew, Lone Star Rally in Galveston, and the granddaddy of them all—Sturgis, S.D.

Hunter said the chaplains have prayed personally with more than 29,000 people in the past 10 years, and their conversations have led to 386 rededications and 181 professions of faith. They have recorded 22 baptisms and he has performed 31 wedding ceremonies and officiated at 27 funerals.