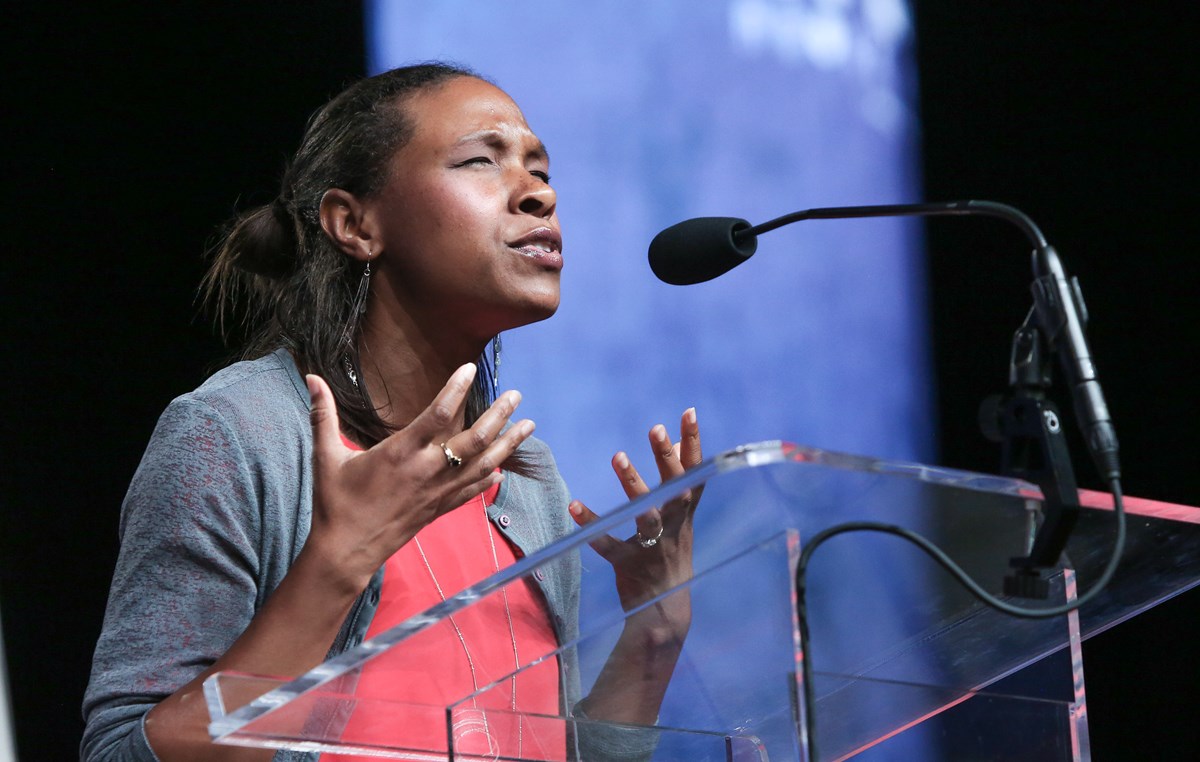 BIRMINGHAM, Ala. (BP) — Women have indispensable roles in the Southern Baptist Convention and in the church, said panelists during the “Indispensable partners: the value of women in God’s mission” panel discussion during the 2019 SBC Annual Meeting in Birmingham, Ala.

Southern Baptist Convention President J.D. Greear, who moderated the discussion on June 12, began by asking the women on the panel about their initial response to the Sexual Abuse Advisory Study report that preceded their time on stage. See related Baptist Press story. 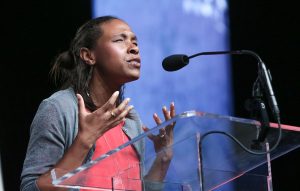 Trillia Newbell, director of Community Outreach for the Ethics & Religious Liberty Commission (ERLC), prays at the conclusion of a panel discussion called “Indispensable Partners: The Value of Women in God’s Mission” June 12 during the ERLC presentation during the Southern Baptist Convention annual meeting in Birmingham, Ala.
Photo by Van Payne.

Author and Bible teacher Jen Wilkin, classes and curriculum director at the Village Church in Dallas, appeared visibly overcome with emotion as she shared how she received texts from women who said, “This is what we prayed for.”

“And that is my overwhelming feeling: This is what we prayed for,” she said.

Author and speaker Donna Gaines thanked Greear personally for taking the lead on the issue.

Gaines is the founder of ARISE2Read, a nonprofit that focuses on literacy in the inner city, and wife of former SBC president and pastor Steve Gaines of Bellevue Baptist Church in the Memphis, Tenn., area.

A sex abuse survivor, Trillia Newbell, director of community outreach for the Ethics & Religious Liberty Commission, said she is “grateful to know I’m in a safe place. So that speaks volumes.”

Noting her hope because the issue has been taken so seriously, she said, “We know what we know, we’ve seen what we see, we can’t unsee it, and we aren’t sitting idly by, and I praise God for that.”

Greear then asked panelists, “What is complementarianism as understood by Southern Baptists and is there disagreement on it even among this panel?”

Danny Akin, president of Southeastern Baptist Theological Seminary in Wake Forest, N.C., noted that “complementarianism, as a bedrock basic, affirms that men and women equally bear the image of God.”

“There is an essential equality between men and women,” he said, “and yet within that framework God has established distinctive roles and assignments for men and for women, and we rejoice in that good gift of God.”

Akin called attention to men’s particular role as “servant leaders” as assigned by the Lord “particularly in the home and in the church.”

“God calls women in the home to submit to the leadership of their husbands, but there’s no sense in which there is any inferiority, it is simply different assignments within the clear understanding, that we’re equal image bearers before God,” Akin emphasized.

Newbell explained, “We know that there is a broad complementarianism so people will apply it broadly outside of the church and the home. And then there’s the narrow where people mostly would define it as the pastoral position and the home. … I’ve seen it applied incredibly differently, all sorts of different ways within the Southern Baptist Convention and beyond.”

Malcolm Yarnell, professor of systematic theology at Southwestern Baptist Theological Seminary in Ft. Worth, Texas, recognized the two major groups that are staking out positions –- “both very well respected within the Southern Baptist Convention.”

“For some, the pastoral role comes under examination, and for some complementarians the pastoral role is exclusively for males,” he said, noting they go a bit further than the BF&M, which emphasizes the office of pastor. This group argues from 1 Timothy 2:12 that only a qualified male can teach and exercise authority.

“Another group would have a different understanding of that verse and what that verse entails,” Yarnell said. “The congregation may have a female address the congregation in a teaching role, but not in an authoritative or doctrine-defining role.”

Greear pressed, “Can women hold leadership positions in the Southern Baptist Convention that are not in violation of complementarianism?”

Yarnell responded, “The Southern Convention is definitely not a church. The entities of the Southern Baptist Convention are not churches.”

He differentiated the local church, which Jesus established, with the entities, which are “human creations.” As such, entities “can structure them however we wish,” he said.

Yarnell said at least seven previous SBC presidents were not pastors but lay leaders. “That ought to tell us something about the openness of the convention,” he said.

When asked if a woman could serve as SBC president, Gaines, wife of a former SBC president, answered, “If you look at the BF&M, the only office restricted to men is the office of pastor. So under that umbrella, technically, yes, a woman could be president of the SBC. Practically, I would say, no, simply because the office itself is leading and shepherding a convention of churches, which are led by pastors. And this is just personal preference. I prefer to see a pastor in that position.”

The practice and tradition of the SBC, she noted, has been to invite the SBC president to come and preach at church services and conventions, typically ministering to pastors.

Responding to recent conversations and debate on the issue, Wilkin expressed her desire for this issue to be as between brothers and sisters rather than adversarial and with “a tone of love versus fear.”

Southern Baptists should discuss the topic with the primary goal of “building tables” instead of “building fences,” she said.

She also urged for churches to look for “visible women” and “church mothers” whom others could come to for discipleship and growth and for the female perspective.

Akin agreed, noting half the people who hear sermons are women. “We will be better preachers if we have female voices speaking into our lives …Women look at life differently,” he said. “They think differently. They ask different questions. And if I want to minister to them effectively, I need their voice in my life.”

View all posts by Shannon Baker