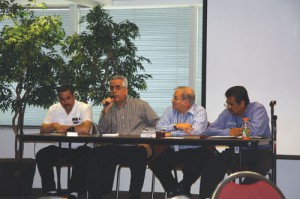 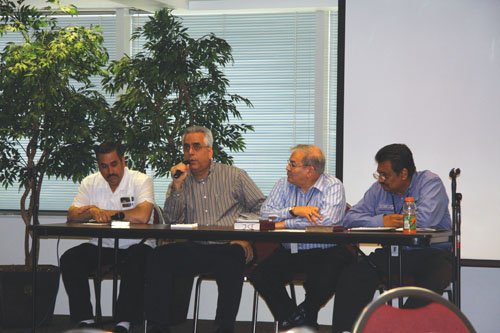 With the Hispanic population in Oklahoma soaring, Oklahoma Baptists have the opportunity to make a huge impact by sharing the Gospel of Jesus Christ with those who are flocking to our state, Baptist General Convention of Oklahoma employees were told May 13 during monthly At Home Day (Staff Development) activities.

A day later, estimates released May 14 by the U.S. Census Bureau indicated the Hispanic population in Oklahoma has grown by 100,000—a 55 percent increase—since 2000. Hispanics account for nearly 8 percent of the state’s population of 3.6 million, up from 5.2 percent in 2000, according to the Oklahoma Department of Commerce.

Texas County in the Panhandle had the state’s largest population of Hispanic residents—42 percent— according to the commerce department, with Harmon County in far southwest Oklahoma second at 25 percent.

Caceres, who first came to minister to Hispanics in Clinton from New Mexico in 1981, said “there were six Hispanic churches in Oklahoma when I moved here and only one in Oklahoma City. Today, there are more than 100 in the state.”

Caceres said Hispanics generally are a very gregarious people. As such, he offered five ways to reach them.

“First, they love smiles,” he said. “Then, I have five recommendations. Invite them to eat, and they will come. Also, they love movies. Showing the Jesus Film is a great way to get them to show up.

“Also, Hispanics love sports—soccer, basketball, baseball and volleyball, but no boxing. They also love music of all styles and they love to watch live drama.”

Caceres said social gatherings are important, especially those which draw Hispanic families together.

“We can start 30-40 new Hispanic churches this year if we can find the workers to do so,” Caceres said.

Conchos said Hispanics are highly family-oriented, are a religious people because of their roots in Catholicism, value friendship highly and “believe in education.”

He said non-believers sometimes have a hard time accepting Christ because, “If I accept Jesus as my Lord and Savior, most likely I have broken my relationship with my family, at least temporarily. It will take time for them to have a real encounter with Jesus Christ; be patient with them.”

The panelists said good tools to reach Hispanics include English as a Second Language and events connected to annual celebrations such as holidays and festivals. (See related story on page 1)

Zamarron also spoke during the worship portion of At Home Day on doing God’s will by waiting on the Holy Spirit’s direction and guidance.

Using Paul’s change of direction when the Holy Spirit sent him away from Asia through a vision of a man in Macedonia in Acts 16:6-10, Zamarron said “We need to wait on the Lord’s time . . . He opens doors for us. We need to wait (sometimes) until God assures you in your heart this is what He wants you to do.

“But, when you’re in God’s will, things happen. We all need to capture a vision from God, and if God is pleased with you, it doesn’t matter if someone else isn’t. Everything you do, do for the glory of God!”

BGCO Executive Director-Treasurer Anthony Jordan recognized Zamarron’s service as a vice president of the convention over the past few years and of the service of several Hispanics on the BGCO Board of Directors.

“They are not simply people that we minister to, they are a part of the ministry that we do and walk alongside us,” Jordan said. “This summer, we are so thrilled that we are going to have a Hispanic Week at Falls Creek. It will be a great opportunity and we are looking forward to seeing that happen.

“We are a rich people when you think about it, aren’t we? We’re not just middle class, white people who go under the name of Baptist. Don’t ever forget, there is clear evidence that Oklahoma Baptists are the most ethnically diverse people of any denomination, and we ought to be. I am so thankful that that is so.”