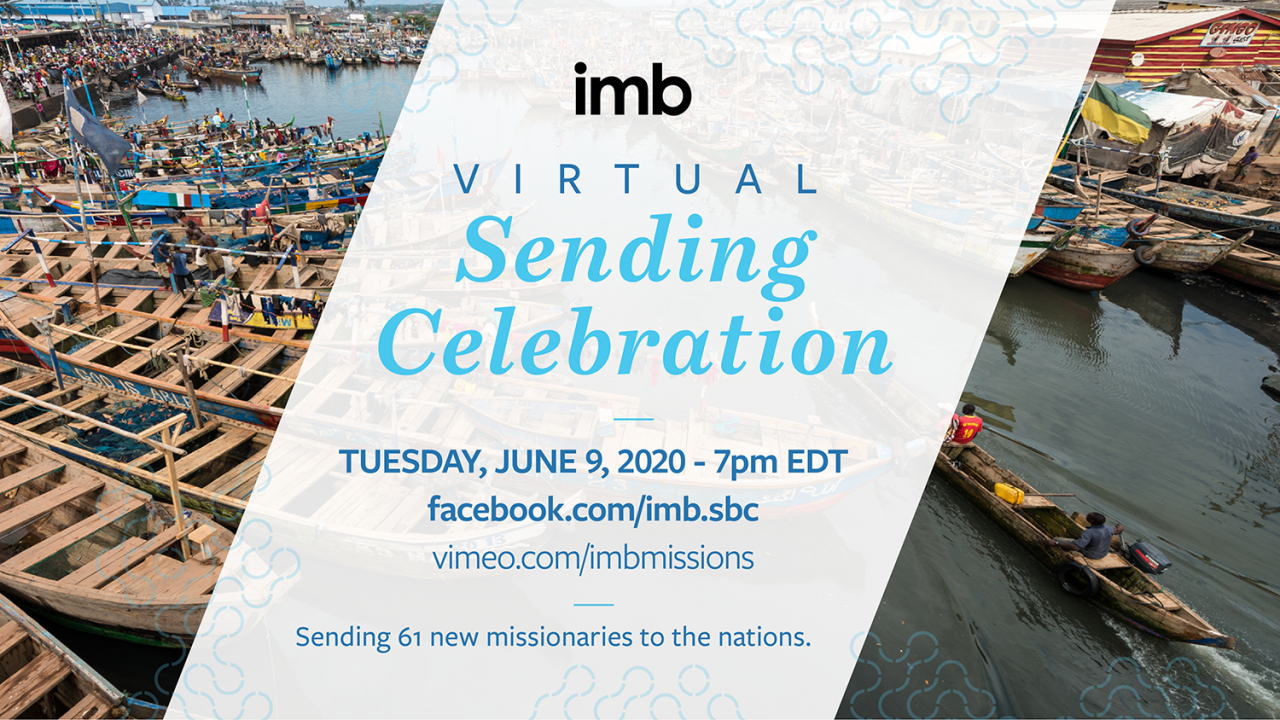 Since 1845, nearly 25,000 Southern Baptist missionaries have shared the Gospel, made disciples, planted churches and settled their families in 185 countries around the world. Sending Celebrations are a time to commission new missionaries who are furthering the vision of reaching all peoples with the Gospel of Jesus Christ.

Considering the necessary cancellation of the SBC Annual Meeting in Orlando, Florida, where the Sending Celebration was to take place, the International Mission Board (IMB) moved the celebration for the first time to an all online event on June 9 at 6 p.m. (CST).

IMB President Paul Chitwood said the virtual Sending Celebration is another chapter in the long history of the mission board.

“Throughout our 175-year history,” Chitwood said, “Southern Baptists have maintained an uninterrupted witness among the nations, in spite of famines, wars, civil unrest and even—as we are experiencing right now—a pandemic. We’re grateful God has continued to expand His Kingdom and allowed us to join Him in His work. And there is still work to do. That is why IMB is still sending Southern Baptists’ missionaries. These faithful workers are going out to share the Gospel to the very ends of the earth. Your prayers and financial support are needed now more than ever. Every church, regardless of its size or resources, has a part to play in reaching every nation with the Gospel. And the nations are waiting. Thank you for doing your part.

Hance Dilbeck, executive director-treasurer for Oklahoma Baptists, also expressed his gratitude for the commissioning of the new missionaries.

“We are thankful that, even during a time when a lot of the things we take for granted are put on hold during the Coronavirus pandemic, Oklahoma Baptists, along with other Southern Baptists from around the nation, continue to advance the Gospel,” Dilbeck said. “I want to encourage everyone who can to participate in this virtual event. Let us show these missionaries that our prayers and support are with them.”

Four Oklahomans will be among the 59 new missionaries, and two who were appointed in January who will serve within each of IMB’s nine global affinities: the Americas, Central Asia, Deaf, East Asia, Europe, Northern Africa and the Middle East, South Asia, Southeast Asia and Sub-Saharan Africa.

Oklahoma Baptists can join a Facebook watch party of the event hosted through the convention’s official page, or follow the Facebook Live event on June 9 at 6 p.m. CDT on IMB’s Facebook and Vimeo pages.

Participants in the online event will have the opportunity to hear the stories of how God has called the missionaries into His service. They will also be able to join others in praying over them as they prepare to make their homes overseas for the sake of the Gospel.

A downloadable and printable prayer card has been provided to help missions supporters keep the missionaries in their prayers after the event.