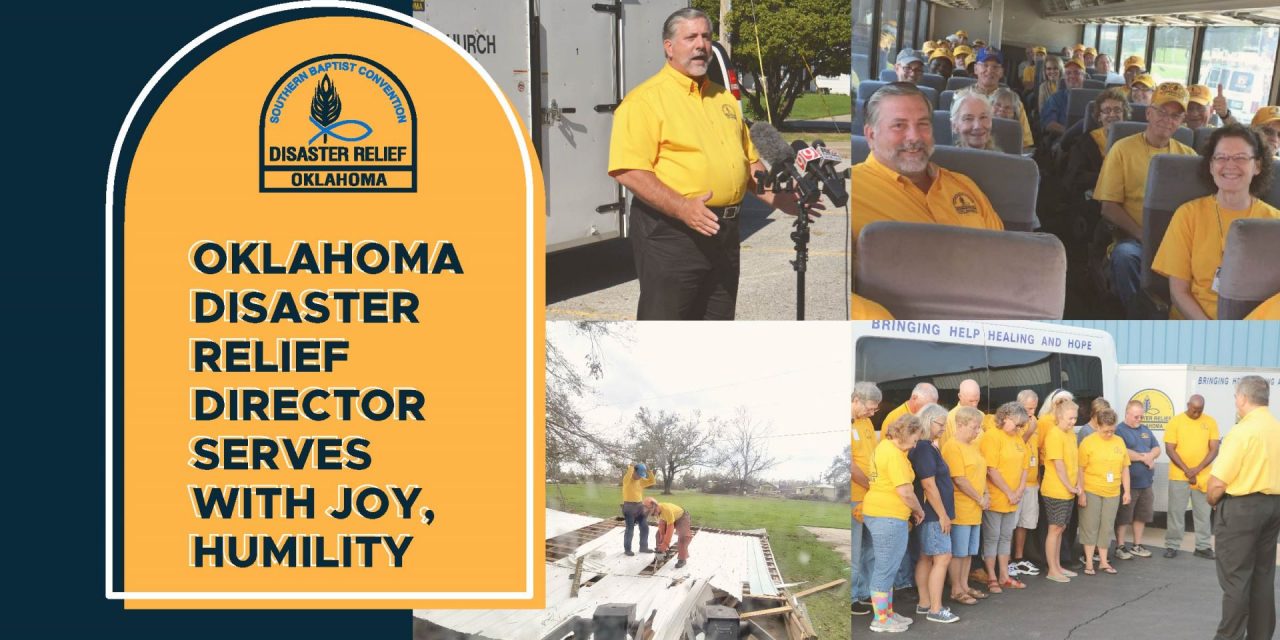 On August 16, 2017, Don Williams began his role as director of Oklahoma Baptists Disaster Relief (DR). Less than 10 days later, Hurricane Harvey made landfall, hitting the southeast coast of Texas and southern Louisiana, wreaking havoc and leaving behind a path of destruction and heartache. 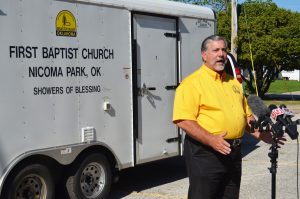 Don Williams meets with the media to give a report on DR work after Hurricane Harvey.

“We had a short time (before the storm) where I had a lot of thoughts and plans,” Williams recalled. “Then we were on the road faster than I expected.”

Since then, DR ministry has been a whirlwind for Williams. Many more storms and natural disasters have occurred in the last four and a half years. Hurricanes, tornadoes, floods, fires and ice storms were each different in nature and scope, but in every case, the people who were impacted by these disasters needed someone to bring help, healing and hope.

Williams, who retired as a Lieutenant Colonel Air Force Pilot after 22 years, believes what he learned in the military has benefited his role of leading DR. 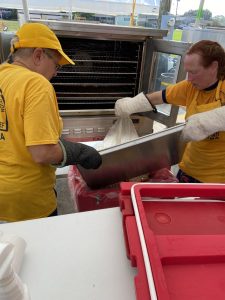 “The work ethic, thinking through problems and providing solutions moving forward is probably the benefit of that experience,” Williams said. “But I was not involved with disaster relief until I came to serve in chaplaincy ministry.”

After retiring from the Air Force in 2009, Williams served on staff at Del City, First Southern in education ministry and later worked as an administrator at a juvenile prison in Tecumseh. Williams began working with Oklahoma Baptists as the director of chaplaincy in 2009. He then became director of chaplaincy and disaster relief for the state convention when Sam Porter moved to lead the North American Mission Board Send Relief program in 2017.

It is Williams’ job to lead the team that recruits, trains, equips and mobilizes Oklahoma Baptists in disaster response. Because of the generous giving of Oklahoma Baptists who give through the Cooperative Program, Williams can focus full time on leading an all-volunteer army of DR workers. 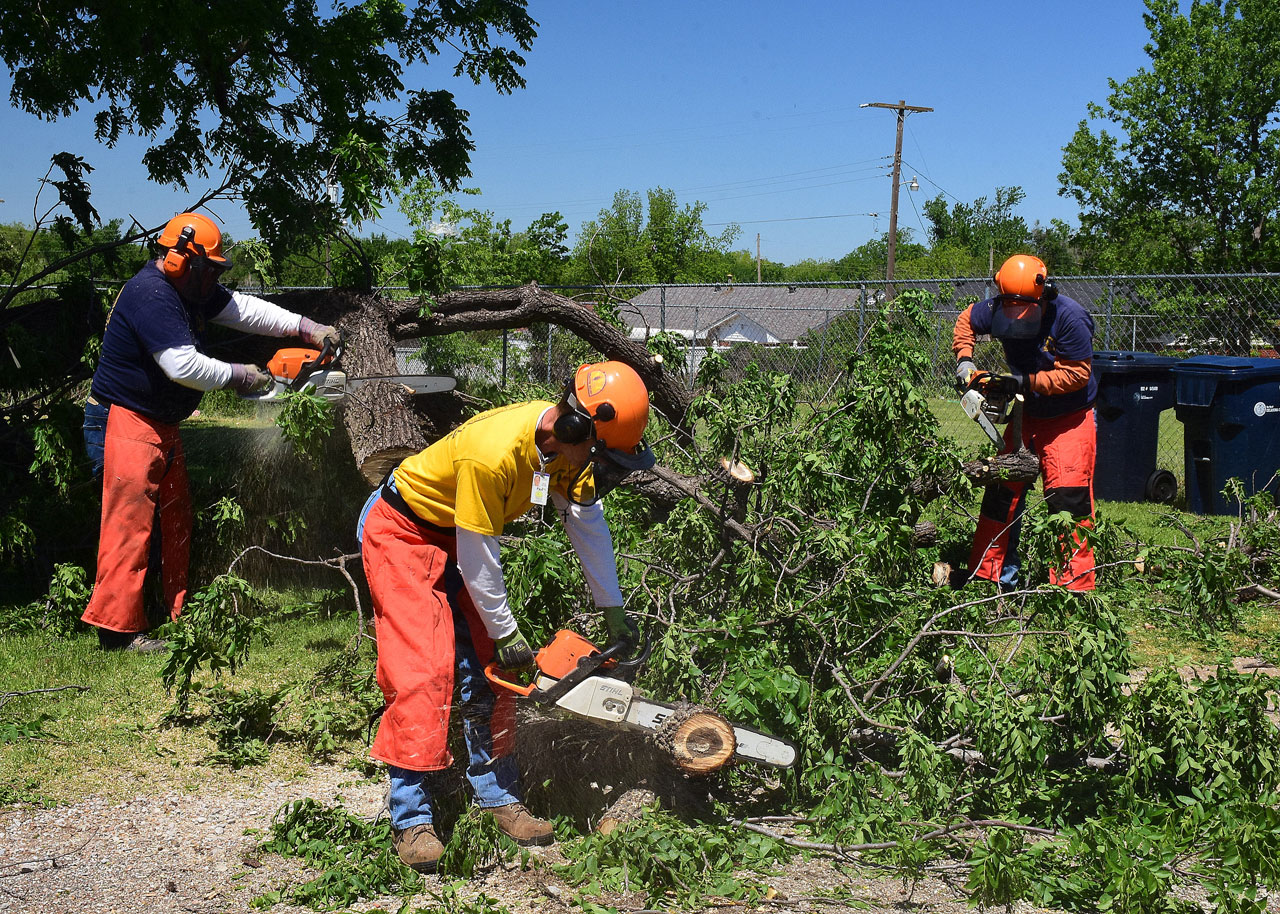 Chainsaw work is one of the many functions DR does to help those affected by storms and natural disasters.

“I prefer not to call them ‘volunteers’,” he explained. “I prefer to call them ‘team members.’ I see them as a team of Oklahoma Baptists who serve as a calling to ministry, staying until the job is done.”

Often that job means cooking and serving warm meals, assessing damage, cleaning up the debris, sorting and moving wreckage, clearing mud out of homes hit by flooding and literally helping victims sift through the ashes.

Currently, Oklahoma DR is engaged in disaster response after wildfires ravaged a thousand homes in Boulder, Colo., where more than 35,000 people were displaced. Williams recalled a recent story from one of the DR team members among those who have been working in the area since December.

“We are not allowed to move the ashes from homes, due to Environmental Protection Agency regulations, but we are allowed to sift through areas where people may think that they have valuables,” he said. “One woman asked us to sift through her home, and we found out that her son was an Afghanistan veteran.

“Though her home was completely destroyed by fire in Boulder, our DR team was able to recover some of his medals and some coins her son had brought back from his time of service in that country. Finding those items was meaningful for this mother who needed them to help her begin the healing process of losing her home.”

Williams is not one who likes to talk about himself much, but under his tenure as director, DR has made great strides in ministry while responding to six hurricanes, multiple flood and tornado events and fires in Oklahoma and beyond. For four and a half years, DR has served thousands of meals, helped numerous homes, trained hundreds of team members, including chaplains, and most importantly, witnessed many professions of faith in Christ.

“When someone asks us why we do what we do,” Williams said, “and they always ask you why you are there helping them—we tell them, ‘We are here because God sent us to help you.’ And then we share our testimony and the Gospel with them.

“We were able to share the Gospel because of hurricane Ida last year,” Williams continued. “That happened because we cleaned up debris and did chainsaw work on 259 homes. We saw 777 people pray to receive Christ. What a joy!”

Williams has also taken the initiative to launch a new emphasis in the state’s DR program. Though the local church has always been vital to the DR strategy of Oklahoma Baptists, Williams believes it’s time for DR to put even greater emphasis on local congregational involvement. He wants to put more of the spotlight on getting people to think of the churches in communities as the place to go to find help in times of crisis.

“This will require churches to be willing to feed people from their church facilities,” he said. “DR will purchase the food, prepare it and deliver it to churches who will serve in their locations.”

Williams went on to explain this emphasis will help churches better connect with people, share the Gospel with them and help their communities become familiar with local churches.

It means Oklahoma Baptists will also need to be giving to provide money to purchase food and stepping up their response to serve as disaster relief volunteers. Williams said local churches meeting needs on the front lines of a disaster, opens people to other kinds of ministry outreach.

“I always tell people, we meet physical needs so we can speak spiritually into people’s lives,” he said. “It’s very rare that for someone in the community to call a church and ask someone to come visit them. But when a disaster happens they are more than happy to see someone bringing hope. “

As Williams has learned since the earliest days of his ministry, there is no way to know when disaster will strike. But it is clear that he and the Oklahoma Disaster Relief Team will be there to serve with joy and humility bringing help, healing and hope.

To learn more about Oklahoma Baptists Disaster Relief or to donate, visit okdisasterhelp.org.