Arlene Blanchard woke up on a beautiful spring day on April 19, 1995, just nine days away from being out of the military and beginning her civilian life. She was making plans to attend college and begin a new career.

Blanchard had recently moved to Oklahoma from Alaska, where she was previously stationed with the Army. “I knew absolutely nothing about Oklahoma, I just thought cowboys and Indians,” Blanchard joked.

She got married and began to love life in Oklahoma. “I had never been to a place where people were so nice and kind. It was mind blowing! We found a good church family that loved us, and life was good,” Blanchard said.

She arrived at work, in the Alfred P. Murrah Federal Building, on the fourth floor, in the Army recruiting office, to train her replacement who was visiting the building where he would soon work with his family.

“I was about 20 feet away from the blast, I was sitting right by the window. All I remember is the presence of the Lord covering me like a soft blanket in the midst of all of that trauma,” Blanchard said as she recalled the day she was inside the building Timothy McVeigh bombed.

Blanchard said initially she didn’t know what happened. She thought maybe her computer had exploded or some other kind of “freak-accident.”

“Then I got my wits about me, and all around me it looked like a tornado had hit,” she recalled. “On the left, it was beautiful bright sunlight; the sky was crystal clear, and the sun was just beaming in, and to my right there as just death and darkness and devastation. I could barely see beyond these billows of black smoke rising in the air from the building.”

The contrasting picture of light and darkness stayed in Blanchard’s mind since that day 23 years ago along with the names of the people from her office that died that day: Lola Bolden, Victoria Sohn, Karen Carr, Peggy Holland, John Moss, Dolores Stratton, Wanda Watkins and Kayla Titsworth.

Blanchard said initially she was filled with bitterness, anger and self-pity. “It was aging me. Until one day I felt like I saw Jesus carrying the cross to Calvary and it was for my sin,” said Blanchard.

“I thought, ‘By the grace of God who am I? I am capable of the same evil. Who am I to have that kind of judgment on any other human being as if I had never done anything wrong?’ Jesus rocked me, but He did it with such sweetness and mercy.” 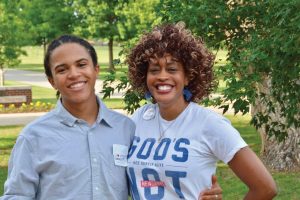 Arlene Blanchard’s youngest son, Lawton, ran the Oklahoma City Memorial Marathon in 2017 in honor of his mother, a survivor of the 1995 Oklahoma City bombing.
Photo: KGOU.org

She said her hate and disdain for Timothy McVeigh began to diminish. Someone who she once felt so betrayed by, as they had taken the same oath to protect and serve the citizens of the United States of America, she now felt relief.

“It dawned on me that so many people are walking in darkness and not taking hell seriously,” Blanchard said.

Since the bombing, Blanchard had dealt with great amounts of fear and panic or anxiety attacks, things with which she said she had never previously struggled. But she attended a church service, just before the bombing at the church across the street from the Murrah Building.

“The preacher taught about David, and used and acrostic of the word FEAR. ‘False Evidence Appearing Real’ is how the pastor outlined his message. I felt God telling me that He did not deliver me from that building to live a life of fear. So I started seeking Scripture that addressed fear,” Blanchard said.

Then the Lord placed Psalm 27:1 in Blanchard’s path as she read her Bible which says, “The Lord is my light and my salvation—whom shall I fear? The Lord is the stronghold of my life—of whom should I be afraid?”

“I began to repeat that verse over and over to myself, and He provided me with peace,” Blanchard said. “Pain is an incredible teacher. Through all of this, I have experienced Him in a way that I don’t think I ever could have on my own.”

Now, Blanchard is a member at Oklahoma City, Putnam City and an advocate for forgiveness. “When you allow God to take the pain in your life and you give it to Him, the mess that you have, He turns it into a message. I’ve experienced his truth over and over again.”

She said that forgiveness is a process, but she pleads with people to be honest with the Lord, because He knows their hearts. Blanchard said she often returns to a quote by Adrian Rogers who said that unforgiveness is like drinking poison and expecting the other person to die. “Why would I allow Timothy McVeigh or anyone else to steal, kill and destroy the plans that God has for me? That’s all that walking in unforgiveness does to me.”

As the 23rd anniversary of the bombing has come, Blanchard reflects on the day in April of 1995 that her life was changed. She says each year in the spring, as the day approaches, it is a somber time for her, but the Lord has delievered her from the pain and anxiety she once felt overcome by.

“His Word is my life. I’m more dependent on his Word than the breath that I breathe. What an incredible Savior we have,” Blanchard said.