Oklahoma Baptists support See You At The Pole 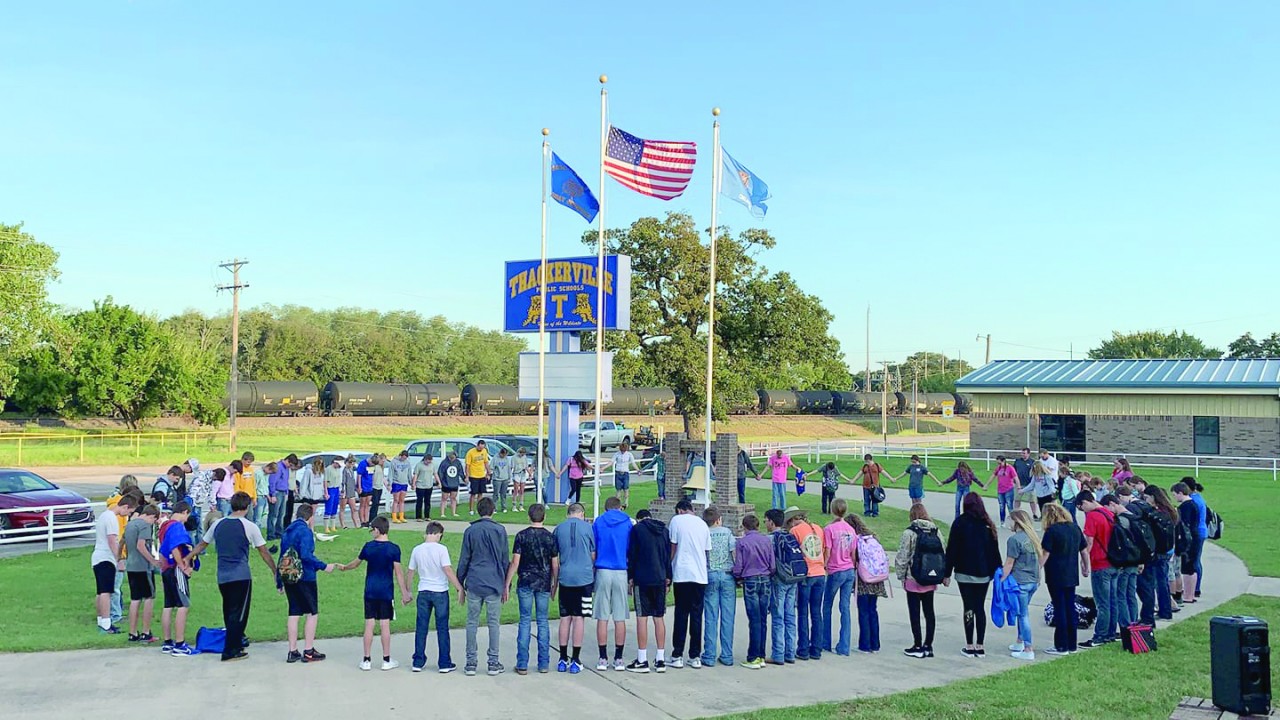 Every year, across the world, students gather around their school’s flagpole to pray, observing See You At The Pole (SYATP). Oklahoma Baptists make a strong effort to keep this annual occurrence across the state.

On Sept. 25, countless communities had students meet early at their schools to pray at the flagpole. Brian Baldwin, student missions and evangelism specialist for the Baptist General Convention of Oklahoma, was excited to hear about the turnout at the many schools across Oklahoma.

“It’s an excellent opportunity for the students to be bold, to declare their witness to Jesus as they gathered around the flag pole,” Baldwin said. “It’s good for our students because it shows declaration of dependence on God. It’s also good for churches to bring unity at the poles and rallies, even with the partnerships that are a result of what happens at See You At The Pole.”

Several Oklahoma Baptist leaders participated with students at SYATP, but they also were involved in the rallies afterward, Baldwin mentioned, which happened later in the day. And many of these post rallies are supported through the Edna McMillan Oklahoma State Missions Offering.

“Churches that are putting on the rallies get with their director of missions and request these funds that are provided through the State Missions Offering,” Baldwin said. “At the rallies, they are required to have a Gospel presentation and provide an opportunity for students to respond. It’s a great opportunity to impact lostness.”

Baldwin also understands how important it is to have students be a part of SYATP.

“Anytime you get students together to pray it’s going to make an impact because prayer makes an impact,” he said. “It says in Psalm 127, ‘Unless the Lord builds the house, those who build it labor in vain.’ We want God to be involved in everything we do.”

SYATP also has other impactful results.

“After students gather around the pole, the desire grows to do more things like that,” Baldwin said. “Whether they launch a campus ministry club at their school, or they strengthen ministries that already exist. In turn, these ministry opportunities impact the campus, their communities and really our state.”

Baldwin was confident there would be great participation at the rallies happening across Oklahoma. “Every year, people are saved, and that’s the greatest result from these rallies,” he said.

Ronnie Null of Duncan, Fair shared with the Baptist Messenger a report on SYATP at Empire High School.

“Our spirits were high when we began with around 90 students, plus many parents, teachers and staff before it was over,” Null said.

Empire’s SYATP observance had many students involved in sharing the history of SYATP, Scripture reading, sharing a devotion and leading other students in singing. Null reported participants divided into small prayer groups and prayed over specific needs.

“Each group was asked to pray for the students all around the world, teachers and administration of the school, friends and family, and to lift up our local and state leaders and the leaders of this nation as well,” Null said.

The SYATP observance at Empire concluded with singing and joining hands to make a large circle around the flag pole for a concluding prayer.