ELK CITY—On May 16, mere hours after a devastating tornado near Elk City damaged some 100 houses and killed one person, Oklahoma Baptist Disaster Relief (DR) volunteers were 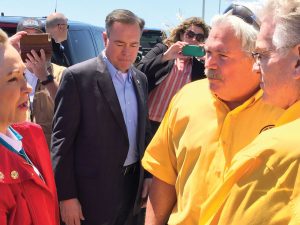 responding to the crisis.

National news stories interviewed Beckham-Mills Director of Missions Danny RInger, who serves as Elk City fire department chaplain. Ringer was among the first responders on the

Sam Porter, DR director for the Baptist General Convention of Oklahoma (BGCO) on Wed. May 17 said, “Our rapid assessment teams were out as the storms were rolling late last night and today we set up our mobile command unit. We estimate that more than 100 homes have been severely damaged or destroyed.”

On May 17, BGCO leaders met with emergency management leaders to talk about the tornado relief efforts. The BGCO DR’s Mobile Command Center was stationed at Elk City, First where all Baptist volunteer efforts are coordinated. 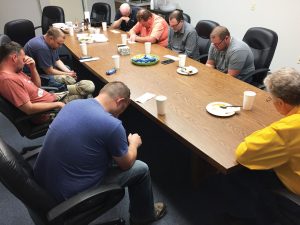 connecting with people in the community.

Jordan also spent time with Elk City area Baptist pastors, who will be taking an active role in the response.

“When disaster happens, we know Oklahoma Baptists will answer the call for help,” Jordan said. “I give thanks to God for Sam Porter and his army of volunteers.”

“I have the privilege of providing checks to pastors for members in their congregations who have lost their homes. Each check is provided to give emergency money until insurance money is made available. The money goes to the church, and the church distributes it to those in need. We only ask the pastor to present the check as a gift from their church and Oklahoma Baptists,” he said.

For updates on continued DR work, or to make a tax-deductible donation to Oklahoma Baptist DR, visit www.okdisasterhelp.org.