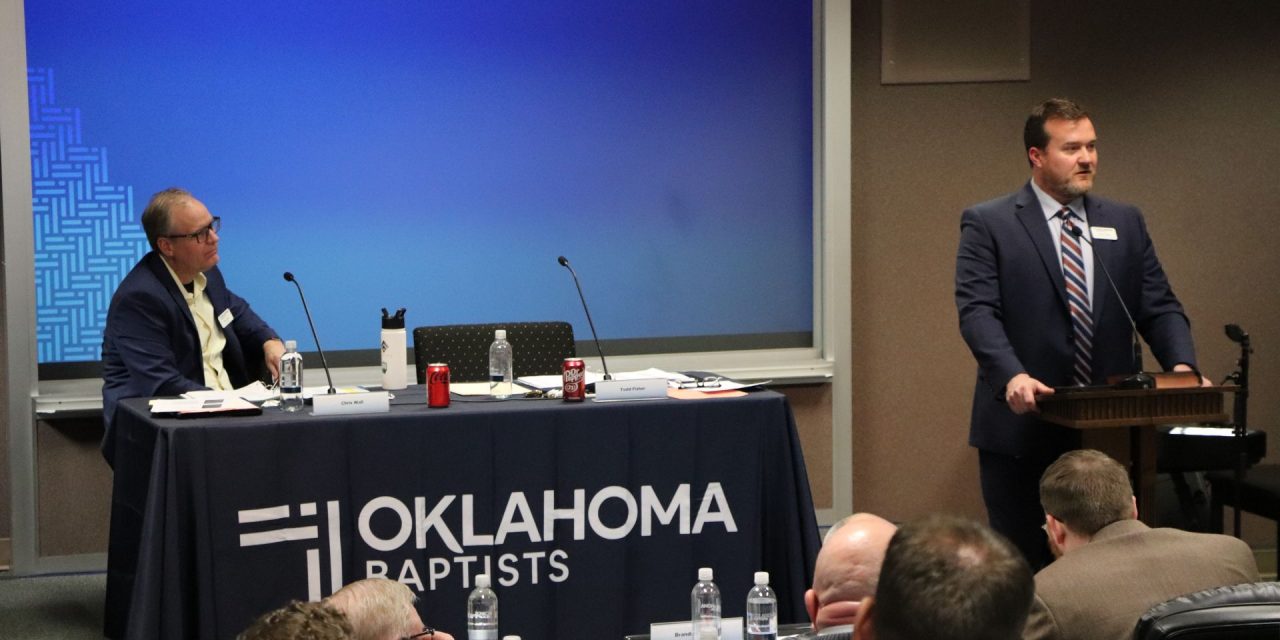 Members of Oklahoma Baptists’ board of directors held their first meeting of 2022 and the first meeting since Todd Fisher stepped into his role as executive director-treasurer for the state convention. 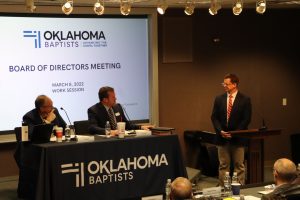 On March 8, members met at the Baptist Building in Oklahoma City for times of business, prayer and encouragement. Chris Wall, pastor of Owasso, First, serves as convention president and presided over the meeting, a time that resulted in the board designating $50,000 toward Ukraine relief efforts.

Addressing the Oklahoma Baptists’ board of directors for the first time in his role, Todd Fisher, executive director-treasurer for the state convention, emphasized his commitment to the work and to serve.

Quoting Matt. 20 (“the Son of Man came not to be served but to serve, and to give his life as a ransom for many”), Fisher said, “I want to serve and want our convention to serve.”

He thanked Oklahoma Baptist pastors and churches for being so encouraging to him.

“Life has been busy in this season, and I am on a big learning curve with a heavy travel schedule,” Fisher said. “In my travels, I have spoken with many pastors and church members, and here is what I have observed and heard: God is still amazingly at work. I’ve witnessed baptisms, heard testimonies of people coming to faith in Christ and lives transformed. Strong giving. I’ve seen resiliency and creativity on the part of pastors and churches to carry out the work of the Great Commission in light of the pandemic. But at the same time, I recognize many of our churches are struggling.”

“I don’t know that I have all the answers,” Fisher continued, “but I do want to share my commitments to our board that I believe will keep us on track and focused on what we should be focused on. As a state convention,  (we have a) commitment to Baptist polity and knowing what the purpose of the state convention is—to serve churches. We must be in the background—not in the foreground steering churches—but in the background serving them. The local church is critical. The work of the Kingdom is done through the church. Conventions and seminaries don’t send pastors and missionaries, churches do.”

“The BF&M ensures we stay faithful to Scripture while at the same time allowing a degree of differences among us,” he said. “I want to engender a culture in our state convention that is faithful to our doctrines and polity that does not add or take away from them and an attitude that urgently and lovingly engages our culture with the Gospel of Jesus.”

Fisher also emphasized a “commitment to pastors. We must encourage, equip, mentor these men. Healthy convention, healthy churches, healthy pastors. This has never been easy, especially not now.”

Board members were enthusiastic to hear a report that Cooperative Program (CP) giving among Oklahoma Baptists exceeded the annual goal in 2021.

“With the 2021 CP objective of $23.1 million, Oklahoma Baptists generously gave $24,507,605 last year, for which we thank the Lord,” said Leslie Osborn, chief financial officer for Oklahoma Baptists, which was met by applause.

Members of the board gave direction to how the CP overage of $1,407,605 (or 6 percent) would be distributed.

With 42 percent designated to Oklahoma Baptists—which represents $591,194 of overage—the board members approved strategic plans for those funds:

Wall set aside additional time in the meeting for prayer, including prayer for Ukraine, for ministries in Oklahoma and across the SBC.

“The Lord has put it on my heart today to take our prayer needs to Him, to join our hearts in prayer,” Wall said. 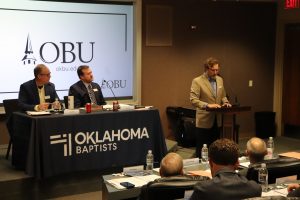 Heath Thomas, president of Oklahoma Baptist University, right, gives the OBU report to the board.

Board members also approved the establishment of an Abuse Prevention & Response Task Force that will study best practices in preventing abuse. The group will present a report at the September meeting of the board, and the scope of the work is forward-looking. Eric Costanzo, pastor of Tulsa, South Tulsa will chair the committee.

“This task force is forward-looking, helping establish best practices to prevent abuse from occurring and establishing best practices to deal with it, should it ever occur,” said Wall. Other members include: Jennifer Barnett, Leanne Deason, Ann Jenkins, Doug Melton, Troy Taylor and Lori Twomey.

The next meeting of the Oklahoma Baptists board is set for May 24 at the Baptist Building.

Near the conclusion of the meeting, Pastor J.P. Williams at Stonewall, First, expressed that he was “grateful and inspired” by the day and how “Oklahoma Baptists state convention is more visible and available than ever.”

Like Williams, all of Oklahoma Baptists can be inspired at the great things the Lord is doing in Oklahoma and beyond.