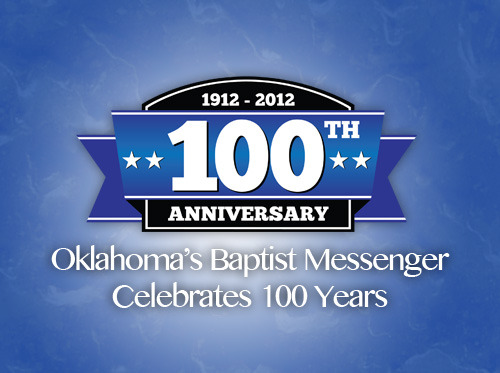 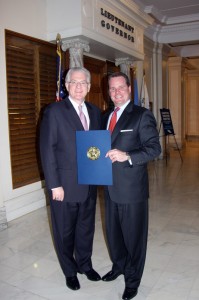 “We are so grateful for all of the people involved in the preparation, production and promotion of the Baptist Messenger over these 10 decades,” said Editor Brian Hobbs. “They leave us with a strong legacy and great footing for the future. We pray God continues to bless the Baptist Messenger in the years to come.”

Hobbs is the 11th editor in the publication’s history and was elected to serve in 2011. The Baptist Messenger, which is the official news publication for the Baptist General Convention of Oklahoma, has a print circulation of nearly 60,000 and a digital version as well.

Notable leaders, such as U.S. Sen. Tom Coburn, financial expert Dave Ramsey and a whole host of leaders within the Southern Baptist Convention extended statements of congratulations to the Baptist Messenger  on its 100th Anniversary.

Al Mohler, president of The Southern Baptist Theological Seminary, said on Twitter on May 15, “Congratulations to the Baptist Messenger of Oklahoma on the paper’s 100th birthday today. A century of service to Baptists.” 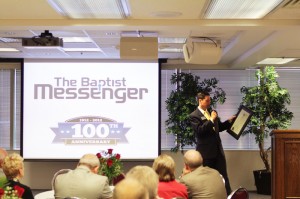 In conjuction with its 100th Anniversary, the Baptist Messenger is hosting a series of celebration events that are open to the public. One was held on May 15 at the Baptist Building in Oklahoma City, where numerous former staff turned out for the celebration. Popular Baptist Messenger columnist Walker Moore, who is president and founder of Awe Star Ministries, spoke at the event. Moore is also speaking at several “homecoming” events scheduled across the state in the next few months.

The Messenger recently completed a series on the paper’s history “10 decades in 10 weeks,” featuring highlights and history from each decade. In addition, the Messenger will publish a 100thanniversary edition magazine in time for release at the BGCO annual meeting in November. 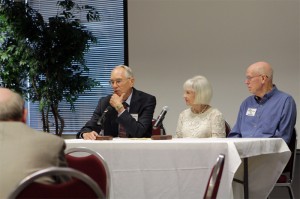