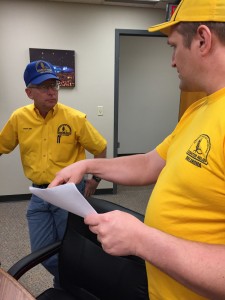 At least 75 homes were destroyed and several hundred were damaged in the Oklahoma City metro area, Oklahoma disaster relief director Sam Porter told Baptist Press. Still, Oklahomans are resilient and thankful that the storms were not as damaging as those that struck Moore, Okla. and other communities in May, 2013, Porter said, that destroyed 4,035 homes and killed 25.

“The storm itself is not as great a magnitude, but for those that lose their homes or a loved one … it’s major for them. It’s very significant for them,” Porter said. “If all they’ve lost is their home, they’re thankful no one lost their life. There’s a great thankfulness that it wasn’t more destructive than what it was.”

A 30-member rebuild crew is applying tarps to the damaged rooftops of salvageable houses. The Tulsa Metro Baptist Network has set up two mobile feeding units at Foundation Church in Sapulpa, Okla., and plan to prepare at least 1,200 meals a day for up to three days, Porter said.

“I really think that will grow. They started out with 600 and just in the matter of a couple of hours, they said let’s put that at 1,200,” Porter said of the meal preparation. “We have chainsaw teams that are working, and there’s been a request also, we have a tarp team, putting plastic tarps on top of the houses to stop the roof from leaking until they can get it fixed,” Porter said, “and just the general debris clean-up teams.”

Trained assessors and chaplains were out determining needs within an hour of tornadoes. More than 50 mobile homes were destroyed in the River Oaks Mobile Home Park in Sand Springs, according to news reports.

“Pastor Rusty Gunn has graciously offered us the use of the church’s parking lot,” said Karr, who initially set up an Oklahoma City-area incident command post at BGCO headquarters. Jim Sheets from Bartlesville was acting as incident commander in Sand Springs.

The state’s disaster relief team and in-state volunteers will likely be able to handle the response to storm victims, Porter said, but warned that it’s still early in the storm season.

“Our greatest magnitude storms normally happen in May. This is the first tornado to hit this year, and knowing … the geography of the United States,” Porter said, “another one could come next week that’s great or greater.”

Porter praised Oklahomans for their response to victims, and thanked those who support the Cooperative Program that helps fund such efforts.

“Oklahomans are resilient. The greatest thing that happens is … the community comes together and they know how to respond,” Porter said. “People who were hit two years ago are usually the first to go a mile down the street to help someone who’s hit again. Volunteers really lead the charge in this here in this part of the United States.”

With reporting by the Oklahoma Baptist Messenger, the news service of the Baptist General Convention of Oklahoma. Diana Chandler is general assignment writer/editor for Baptist Press, the Southern Baptist Convention’s news service. BP reports on missions, ministry and witness advanced through the Cooperative Program and on news related to Southern Baptists’ concerns nationally and globally.