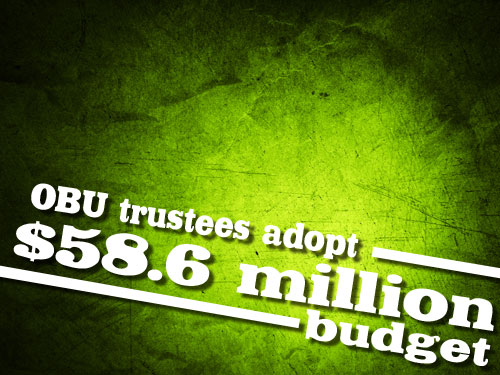 The new operating budget includes a projected distribution of $21.5 million in scholarships for the 2013-14 academic year, according to Randy L. Smith, OBU executive vice president for business and administrative services. The projection is a $2.5 million increase over OBU’s anticipated 2012-13 aid distribution.

In his state-of-the-university report, OBU President David W. Whitlock told board members enrollment numbers have grown to 1,845 since last spring, a 5.6 percent increase over spring 2012.

“We are excited to have the opportunity to help so many students fulfill God’s purpose for their lives,” Whitlock said.

A new apartment village under construction on campus is on track for completion in time for students to move in for the fall 2013 semester, Whitlock said. The president invited trustees to tour the construction site while the wood framing was still exposed so they could write Bible verses and prayers on the framing in preparation for the students who would be living there in the future.

The president announced a $500,000 gift from Robert L. and Sara Lou Cargill to convert the president’s house into the Cargill Alumni and Advancement Center. Long-time supporters of OBU, the Cargills established the Cargill Chair of Business at OBU in 1989. The president will move to a private residence near campus.

In other action, board members approved sabbatical leaves for two faculty members and approved educational leave for one faculty member. Albert Chen, professor of physics, will join the Electrostatics and Surface Physics research team at NASA Kennedy Space Center during the 2013-14 academic year to design, test, and optimize the Electrodynamic Dust Shield technology for future space exploration missions. He has been an OBU faculty member for 27 years.

Karen Longest, associate professor of psychology, will participate in a clinical psychology postdoctoral fellowship in child maltreatment at the University of Oklahoma Health Science Center. She has taught at OBU for 11 years.

Karen Cotter, assistant professor of nursing, will take an educational leave to complete her dissertation at the University of Northern Colorado required for her Ph.D. in nursing education. She has served at OBU for 10 years.

David Lawrence, chair of OBU’s 31-member board of trustees, moderated the board’s plenary session. Lawrence is pastor of Weatherford, Emmanuel.