SHAWNEE—If someone were to ask Hannah Danielson her plans for this weekend, or maybe next weekend, or maybe a weekend three months from now, odds are that she would know with precision. She takes being busy to a level above what most people think. 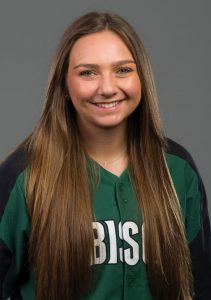 It takes a special kind of person to be a collegiate student-athlete, the kind of person who is confident in their ability to juggle schoolwork and athletic commitments, who can answer a professor in the classroom with the same kind of confidence that they can answer their coach or a teammate in the locker room.

For most student-athletes, that is challenging enough. Not so for Hannah Danielson, who is combining her endeavors as a student and a softball player with an intense desire to serve in the nursing field, specifically in the realm of elder care.

A junior at Oklahoma Baptist University (OBU) who currently is majoring Health and Human Performance, Danielson’s eventual goal is to get into a nursing program. She played her first two seasons of college softball in the junior college ranks, at Hutchinson Community College in Kansas.

When her Hutchinson coaches reached out to the OBU Softball program, and Hannah was presented with an offer to play her final two years of eligibility with the OBU Green and Gold, she said it was an easy decision. The transition, though, has presented challenges, both on and off the field.

“The programs are very different, and the pitching is a little different,” Danielson said. “But I love my team. We all get along very well, we click.”

“As soon as I started walking around campus at OBU, I immediately felt as if I had found my new home. I knew then that this was the place God was calling me to, the place where I could continue my education and athletic career while also learning to grow in my faith.”

There is much more to Danielson than softball.Spending last summer in Edmond, she became a certified nursing assistant. “It’s something I’ve always wanted to do,” Danielson said, “as a way to get into nursing school. It kind of prepares you and puts you ahead.”

Over Christmas Break 2017, Danielson began work as a nurse at Shawnee’s Belfair Memory Care. The facility serves as a home for people with Alzheimer’s, dementia and other memory-related challenges.

Hannah was keen to be a part of the facility. “I’ve had grandparents who’ve dealt with it,” she said. “That’s really why I wanted to start helping the elderly, being able to care for them and help them out.”

Juggling work at Belfair with school and softball is a challenge for Danielson, which is the main reason why she started her job at the facility during the holiday break. In order to keep her position at the facility for the summer, when she plans to work full-time, she has to work at least two shifts a month. This means—taking into account school, practice and games—most of the shifts that she ends up taking are Sunday morning shifts, and even those sometimes get bumped, depending on the game schedule.

Still, she manages. “My bosses are really good about knowing I’m an athlete and being able to work with me,” she said.

Hannah, however, iss willing to endure discomfort in order to know that she is making a genuine difference in the world. The relationships that she is buillding with the Belfair residents is the reason that she has become so enamored with her profession of choice.

“Some of these people… they have good days, and they have bad days,” she said. “When you help them have a good day, when you make them smile, it’s really rewarding.”

Danielson’s plan is to graduate from OBU with a degree in nursing. Specifically, her goal is to find an accelerate BSN program, either in the Oklahoma City area or the Kansas City area. Her current CNA certification would allow her to do that.

“Being an athlete and being a part of a team has prepared me to be a CNA. It’s kind of like teamwork with the other CNAs. We do things, together, to help people. That’s given me an advantage,” Danielson said. “Softball’s also given me a great work ethic, something that’s definitely giving me some strength.”

So yes, Hannah Danielson may be busy this weekend, but it is guaranteed that she is enjoying what she is doing, and the people she is serving.