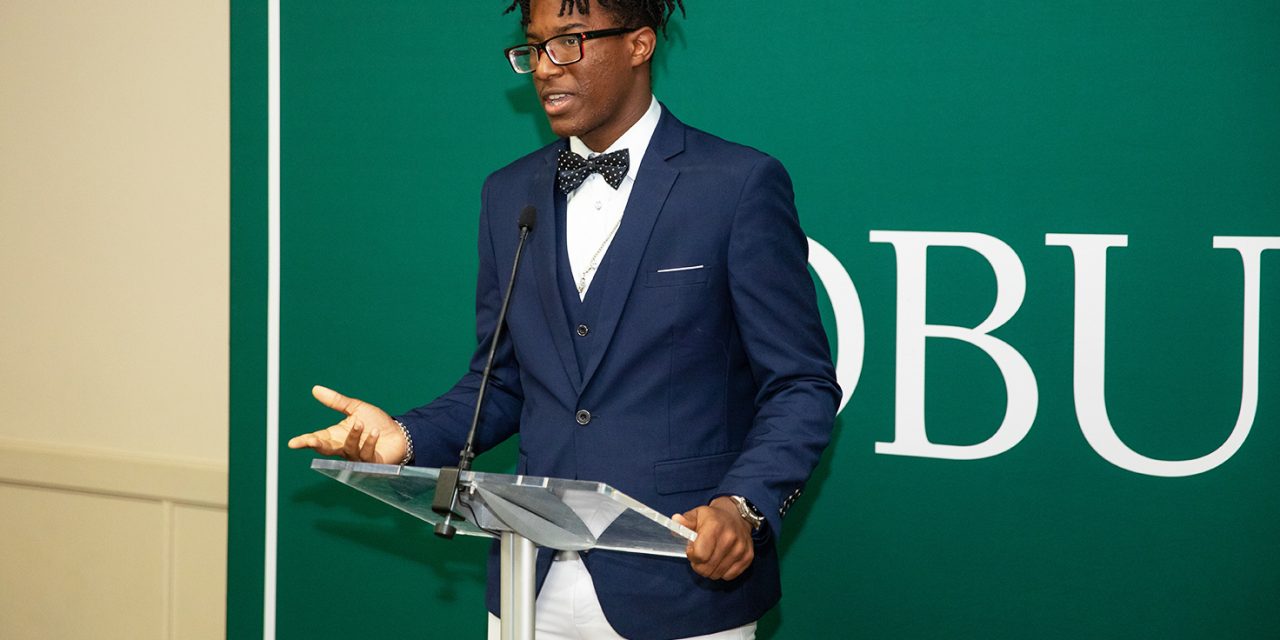 Above: Johnie’Lee Berry speaks during a luncheon event where he was recognized as OBU’s first recipient of the 1921 Memorial Scholarship

SHAWNEE—Oklahoma Baptist University (OBU) recognized its first recipient of the 1921 Memorial Scholarship during a special event Sept. 27 on OBU’s campus in Shawnee. The scholarship was established last year in recognition of the 100th anniversary of the Tulsa Race Massacre, which took place May 31 to June 1, 1921.

Berry spent his childhood in Watts, Calif., before moving to Spencer in 2014. He then graduated from Choctaw High School. He is a freshman sports ministry major at OBU and is active in numerous activities around campus, including Lambda Chi Lambda, club tennis, club soccer and flag football. He first learned he was receiving this scholarship earlier this year through a call from his admissions counselor.

Berry said he is grateful for receiving the 1921 Memorial Scholarship and for being the first student selected to receive it, especially due to the meaning behind the scholarship.

“A scholarship of any sort I’m thankful for,” Berry said, “but to receive a scholarship that reflects something so tragic to the state of Oklahoma makes me feel even more challenged to succeed. I came here to learn to be comfortable being uncomfortable and to inspire change in the world after I depart from here, and this scholarship enables me to perform to the best of my abilities with no excuses. Words can’t describe how thankful I am due to my financial situation. This scholarship is truly a gift from God.”

Berry was recognized during a special luncheon Sept. 27. The luncheon followed the Gaskin Lecture in Raley Chapel, where guest speaker Anthony L. Scott, pastor of North Tulsa, First, spoke on, “The Church’s Response to the Tulsa Race Massacre.”

OBU President Heath A. Thomas first announced the establishment of the 1921 Memorial Scholarship in November 2020 during the Annual Meeting of Oklahoma Baptists, at Broken Arrow, First.

“In light of this 1921 reality that we are going to face together, and in light of the divisions and the disruption, the animosity that was created, what we wanted to do is to partner together to create bonds of unity and pathways for hope in the future,” Thomas said. “So, for this reason, Oklahoma Baptist University has established… the 1921 Memorial Scholarship, which provides full tuition scholarships to African American men and women, as a way to remember, but also as a way to partner together. And where we recognize that Black Wall Street was burned down, we pray that this would be a way to equip the next generation of future shapers, so that they can go into their world and build things up.”

The scholarship is funded by OBU in conjunction with the support of Oklahoma Baptists. Members of the Oklahoma Baptists African American Fellowship help by selecting qualified students, making their recommendations for the scholarship recipients to OBU. The scholarship will exist in perpetuity, awarded to a new recipient every four years. The University desires to raise additional funds to provide scholarships to more students simultaneously in the future.

“This is a small step, but it’s an important one,” Thomas said during the November 2020 event, “And I am going to ask you to join all of us together to pray that this would yield fruit in our state. Fruit of healing, of reconciliation, of Gospel partnership, so that the good of our communities would see the glory of God in Christ.”

In 1921, from May 31 to June 1, Black Wall Street, a predominantly Black neighborhood of Tulsa, was burnt down, killing hundreds of African Americans in one of the worst incidents of racial violence in U.S. history, and one of the least known.