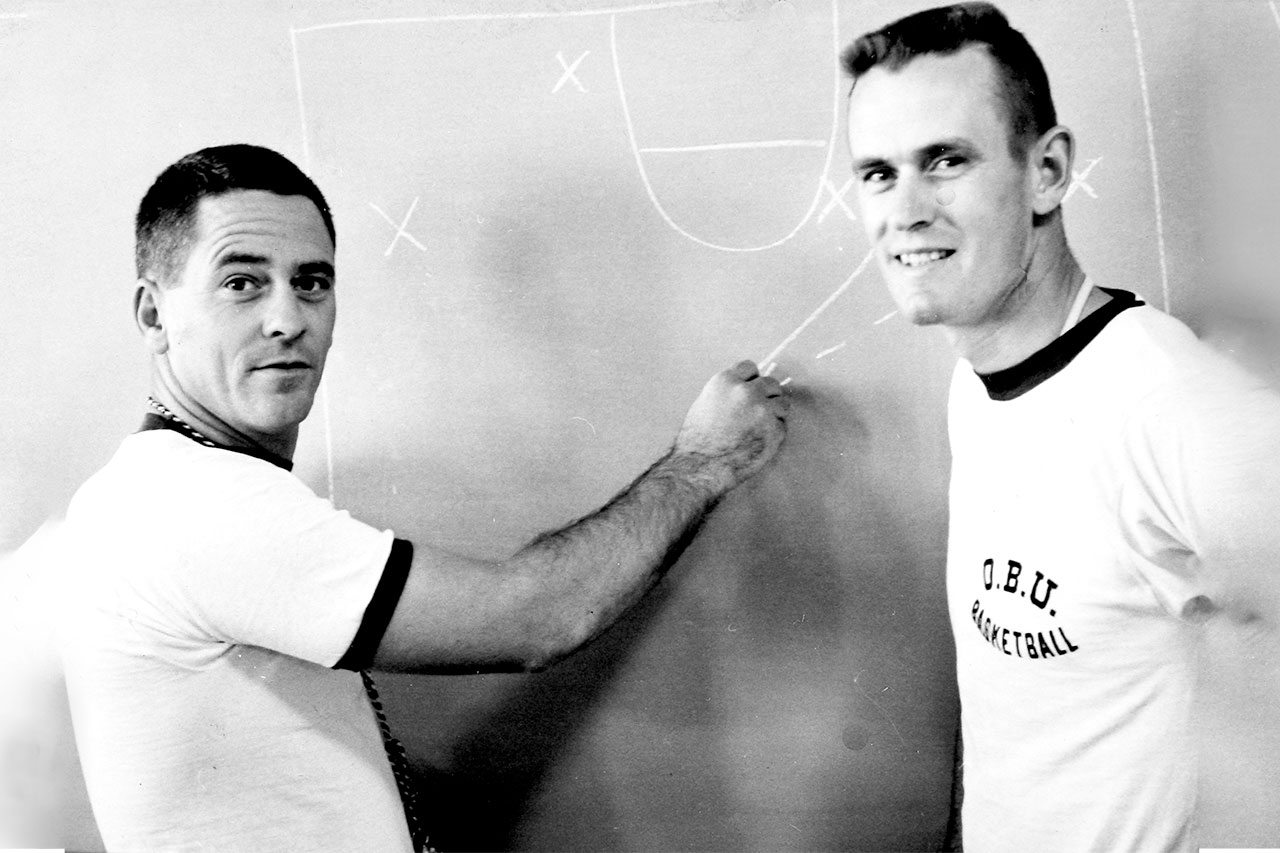 Bass started OBU men’s basketball on its trajectory to success, becoming the program’s first coach to win a conference, district and NAIA championship. He is best known at OBU for leading the Bison to three successive national championship games, including OBU’s first NAIA title in any sport in 1966.

“Bob Bass is the man who started the Bison on the road to success in men’s basketball,” said John Parrish, who was the OBU sports information director in those glory years. “Bob Bass was a developer of great teams and great players and devoted much of his life to improving the game of basketball.”

Bass, who captained the Bison for three seasons in his playing days, served 15 years as head coach of the Bison basketball team, compiling a record of 275-146. His 275 victories with the Bison are second only to Doug Tolin, who is the only other Bison head coach to win a national basketball championship.

Bass was NAIA Coach of the Year in 1967 and was inducted into the OBU Athletics Hall of Fame in 1971. He also coached the OBU baseball team (192-107), won or shared six conference championships and qualified for 13 consecutive District playoffs.

“Coach Bass was responsible for putting Bison basketball on the map,” said OBU Director of Athletics and OBU basketball alum Robert Davenport. “His coaching and leadership goes well beyond Bison Hill. He will be missed.”

After inheriting a 6-15 Bison team, Bass turned things around in his third season, notching the school’s first winning season in three years. His 1957 squad won 20 games—the first OBU men’s team to do so.

By 1958, Bass had OBU in the NAIA Tournament and in 1965 started that three-year run of national championship finals, which coincided with the addition of Al Tucker to the roster. He ended up with six district championships to go with the three NAIA finals appearances.

Bass left Bison Hill after the 1967 run to the national finals and coached at Texas Tech University, American Basketball Association stops at Denver, Florida and Memphis before being hired by the San Antonio Spurs prior to the ABA merger with the NBA.

He became general manager (GM) but still filled in as an interim coach. He moved George “Ice Man” Gervin from forward to guard and helped give rise to a legend. As a GM, Bass was responsible for picking up such players as Willie Anderson, Sean Elliott, Avery Johnson, John Lucas, Johnny Moore, Alvin Robertson and David Robinson.

He also served as GM for the Charlotte and New Orleans Hornets and twice was named the NBA’s Executive of the Year. Hornets owner George Shinn called Bass “the most knowledgeable basketball mind I have ever been around or known.”

Bison remembrances from ‘The Glory Years’ by John Parrish

“We worked on defense and had excellent coaching from Bob Bass and Gene Wallace. The four years at OBU prepared me for the future as a high school basketball coach and teacher and also as a business owner”—R.B. Lynam.

“I will always be thankful to Coach Bass and Coach Wallace for their leadership”—Stanley Pulliam.

“Meeting and playing for Coach Bob Bass was truly a reward”—Steve Kelow.