Above: OBU President Heath Thomas speaks during the Pastors Conference, an event that kicked off activities affiliated with OBU’s homecoming celebration.

SHAWNEE—Oklahoma Baptist University (OBU) hosted a Pastors Conference Oct. 21-22 on its campus in Shawnee. Around 55 pastors, church staff and members of the OBU community attended the free event. The conference kicked off activities for “The Weekend,” OBU’s homecoming celebration on Bison Hill. 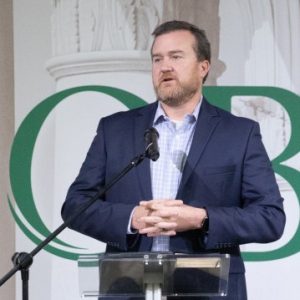 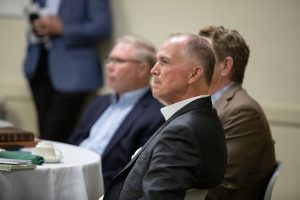 Thomas is the 16th president of OBU. Before assuming the presidency, he served as dean of the Hobbs College of Theology and Ministry and associate vice president for church relations. He also served as the Floyd K. Clark Chair of Christian Leadership and interim dean of the Divisions of Behavioral and Social Sciences and Language and Literature. Before coming to OBU, he served as director of Ph.D. studies and associate professor of Old Testament and Hebrew at Southeastern Seminary. He earned a Bachelor of Arts in English literature from OBU in 1998. He then earned a Master of Arts in theology from Southwestern Seminary and a Ph.D. in Old Testament from the University of Gloucestershire in the United Kingdom.

Dilbeck is the president-elect of GuideStone Financial Resources of the SBC. Before assuming that role earlier this year, he served as executive director-treasurer for Oklahoma Baptists. He previously served as senior pastor of Oklahoma City, Quail Springs. He graduated from OBU in 1987, continuing on to Southwestern Seminary where he earned both a Master of Divinity and Doctor of Ministry. He has been an active participant in denominational life, serving as chairman of the Board of Trustees at OBU, Southwestern Seminary and the International Mission Board, as well as second vice president of the Southern Baptist Convention. He will assume the role of president and chief executive officer of GuideStone in first quarter 2022.

For more information about the Hobbs School of Theology and Ministry at OBU, visit okbu.edu/theology.