OBU President David W. Whitlock provided the opening remarks and introduced special guest Bob Agee, president emeritus. Agee served as OBU’s 13th president from 1982-98, serving the second-longest tenure of any OBU president. He led the university to records in student enrollment and achieved significant success in fundraising, with three major capital campaigns during his tenure resulting in new construction, renovation of existing facilities and growth in endowment for scholarships and academic positions. 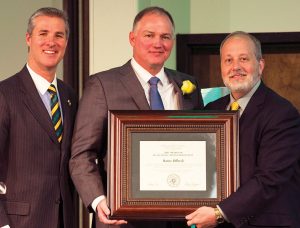 Dilbeck is the senior pastor of Oklahoma City, Quail Springs. In 1987, he graduated with a bachelor’s degree in religion and began his graduate education at Southwestern Seminary. He graduated from Southwestern with his Master of Divinity in 1992 and his Doctor of Ministry in 2002.

Dilbeck has served in the pastorate for more than 29 years, with half of that at Quail Springs. During his time there, the church has tripled in size to more than 2,000 active members, led the Southern Baptist Convention in Cooperative Program giving and has played an active role in more than 30 church planting efforts.

The Graduate of the Last Decade (GOLD) Award is presented to a young alumnus or alumna of OBU, who, in his or her life and career has demonstrated outstanding achievement and brought pride and honor to the University. This year’s GOLD recipient was Worthy Walker, ’10. 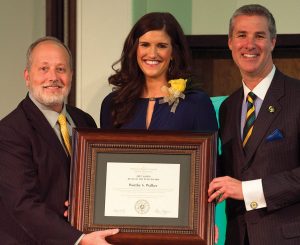 Walker is currently a family nurse practitioner in hematology and oncology with West Tennessee Oncology Consultants at Kirkland Cancer Center in Jackson. After earning her Bachelor of Science in nursing from OBU, she continued her education at Union University, where she earned a Master of Science in nursing. In May 2017, Walker completed her doctoral studies at Union and earned a Doctor of Nursing Practice. In her work as a nurse practitioner, she assists in developing chemotherapy treatment plans for her patients’ specific diagnoses.

The Profile in Excellence (PIE) Award is given to a former student who has demonstrated recognizable accomplishment in his or her profession, business, avocation or life service in such a way as to bring pride and honor to the University.

All eight award winners will be featured in the Fall 2017 edition of OBU Magazine, releasing in early November. Those stories will be available at www.obumagazine.com at that time.