OBU President Heath A. Thomas presided over the ceremony and delivered a charge to the graduates. OBU photos by Clinton Sinclair

Graduates took their ceremonial final walk as OBU students before filing into Raley Chapel. The students, in academic regalia, passed between lines of OBU faculty and staff members near the east steps of Raley Chapel before arriving in Potter Auditorium for the commencement ceremony. LaShane Hill, director of the Kemp Marriage and Family Therapy Clinic, then opened the ceremony with the invocation.

OBU President Heath A. Thomas presided over the ceremony and welcomed guests, reflecting upon the importance of the moment for all of the graduates as well as their families, friends and loved ones. Joe Ligon, senior associate executive director of Oklahoma Baptists, offered a greeting and congratulations to the graduates. 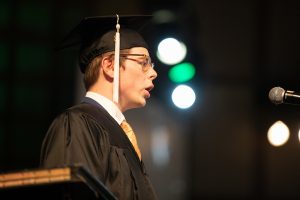 Thomas then introduced the commencement speaker, Thomas Hill. Hill serves as CEO of Kimray, a leading manufacturer of valves and controls for oil and gas production. He previously spoke on the OBU campus in 2020, delivering the Minter Lecture in Business. Kimray began in 1948 and employs several hundred people at its production facility in Oklahoma City and service centers throughout the United States. As the grandson of Kimray’s founder, Hill grew up in a high-performing family, which shaped his belief that people are worth what they can accomplish. This sent him on a long and unfulfilling journey of pursuing success by constantly doing bigger and better things at Kimray and in the community. His life eventually spun out of control and he hit rock bottom. Through significant pain and loss, he began the long and difficult road of recovery that transformed his life and leadership.

Today, Hill enjoys mentoring emerging leaders and sharing his story with others who can benefit from the lessons he has learned. In 2018, he published a book titled “Recovering Leadership: Musings of an Addict Leader.” In 2020, he launched The Kimmell Foundation for Recovering Leadership to inspire transformational change in leaders and in the organizations they serve. In addition to his work at Kimray and the foundation, he currently serves on the board of Salt and Light Leadership Training and is vice chair for Hope Is Alive ministry. He and his wife, Rebecca, both earned their degrees from Oklahoma State University. They have been married 35 years and have six children.

Hill shared experiences from his own life and discussed lessons he learned from a period of time earlier in his career when his life was out of balance. 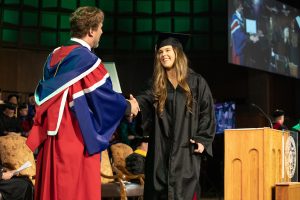 He then challenged the graduating class to guard themselves from negative influences in their lives.

“I want to be very careful about who and what I allow to influence my life,” he said. “In today’s rapid-fire world of constant and instant communication, it’s really easy to get distracted or to become enamored with a fad or something going on, but when I do that, I’m allowing somebody I don’t know and who probably doesn’t have my best interest at heart to influence my thoughts and my behaviors and my beliefs. When that happens, it has a significant impact on my personal culture just like a bad hire can negatively affect our corporate culture.”

“In the same way, once I identify an influence, an ideology or a belief, that does not match, that does not coexist well with my core values, I need to correct that as quickly as I can.”

Hill then discussed the power of investment and which things we should invest into during our lives.

“Future shapers, the next lesson I would offer you is to invest early and often,” he said. “One of the things that keeps people from giving is being lured into spending and calling it investing. Most of the things you will buy in your life are not investments.”

“If you limit what you spend, you’ll have plenty to save and to give,” he said. “Interestingly though, the truth about investment, that applies to money, also applies to our time and our talent…Now is a great time to invest your time and your talent. Volunteering is a wonderful way to invest, one of the greatest ways you can give.”

He encouraged the graduates to consider the importance of investing in relationships, first with God and then with one another. He also challenged them to ponder the differences between influence and power, questioning which of the two are greater things to aspire for in their lives and careers.

“Finally, future shapers, the last lesson I would offer you is that influence is greater than power,” he said. “Leadership is about multiplying the impact of my effort over time, and to accomplish this, I need to work on influence, not control.”

He closed by sharing about how Jesus led his disciples, telling them to go into all of the earth and share his message of salvation, promising also to always be with them.

“Future shapers, that message is as valid for you as it was for the disciples,” Hill said. “God is still in control. Jesus, our Lord and Savior, has authority over this world and the next. You, each one of you, have a mission that you have been given by God and you have prepared for that with the help of the wonderful faculty and staff that are sitting behind me. But most importantly, God will be with you wherever you go. So go.”

Thomas then delivered a presidential charge to the graduates before the conclusion of the ceremony. He shared about the power of language and how it demonstrates God’s sovereignty over the world and our place in it.

“I’m reminded how language, in whatever ancient or modern tongue, is almost magical,” Thomas said. “Language gives us the capacity to creatively communicate with artistry, grace, with verve.”

“Jesus wants us to fire our creativity, our imagination. He wants us to envision that following him is of infinite worth and value for your life and for mine,” he said. “More valuable to us than likes, than money, than possessions. More valuable than our plan or anything else that we can imagine.”

He then reflected upon the significance of each’s graduate’s accomplishment as well as their responsibility to impact the world as they depart from Bison Hill.

“Graduates, from this day forward, you carry a special distinction. You are alumni of Oklahoma Baptist University. I personally want to commend you for your commitment, for your faithfulness and for your diligence.

“My prayer for you is that you allow the Lord Jesus unmitigated permission to work through your life so that this world might be changed,” he said. “Don’t let anyone tell you differently. You are fundamentally an agent of change and good in this world.”

He also challenged the graduates to consider those who have influenced them personally during their time at OBU, and to reflect on how they have grown and matured along the way, not only in their academic knowledge but also in their character and in their faith.

“As you reflect on your time on Bison Hill, remember how the Lord has worked through us to challenge you. How your faculty and staff, how your experiences have changed you. We have equipped you to live worthy of the high calling of God in Christ. We’ve challenged you not to just seek knowledge, but to seek wisdom. To be able to think your way across the room, to discern, to serve, to love both God and one another. And to go and serve our communities.”

Thomas then delivered his final charge to the graduating class of 2022.

“From Bison Hill, I charge you…go into our world, make a difference for God and for good in our cities, in our neighborhoods. Go and live well. Go and serve your community. Go and serve our Lord. And don’t think for one moment that you can’t do it, because you have been equipped.”

The president’s charge was followed by “The Hymn to the Alma Mater,” led by James Vernon, chair of the Division of Music. John Powell, professor of history, then delivered the benediction.

Watch the video of OBU’s spring 2022 commencement ceremony at okbu.edu or on the OBU YouTube channel at youtube.com/c/OkbuEdu.