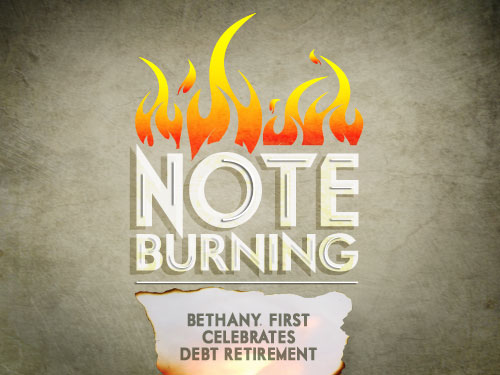 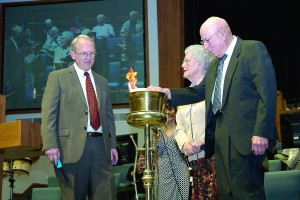 BETHANY—On Sun., March 3, members of Bethany, First united in celebration as they burned the note with the Baptist Foundation of Oklahoma, officially canceling the remaining debt on their worship center.

The joyous step was the culmination of a journey that began in 1999 with a “United in Victory” fund-raising campaign and occupancy of the $2.3 million, 15,000-square-foot, 680-seat worship center in
July 2004.

The “United in Victory” campaign raised more than $600,000 for the project, which complemented an existing education building constructed in the 1970s. Ground was broken on the new worship center on March 9, 2003.

“It was the  final payment on our Worship Center,” said pastor Charles Womack, who pointed out the service also involved the church’s Hispanic fellowship, Iglesia Bautista Fuente De Vida.

“They baptized four new members, and our choir and their praise team led in worship,” Womack said. “We took a day to praise and thank God for His goodness. The morning concluded with a noon meal for more than 200 people who attended from both fellowships.”

Assisting the pastor with the note burning ceremony were two special people, he said.

“They included Mavis Koonce, widow of Matt Koonce, who was the pastor of the church from July 1980 through February 1990,” Womack said. “It was  his vision for the church to build a new sanctuary where we eventually erected the building.

“The other person was Lucien Adams, who has been a member of every building  committee for all of the buildings we currently use. Lucien also served on the Missions Committee and Building Committee  for our first church mission, which is now Bethany, Council Road.”

Womack said the generosity of a couple in the church paved the way for the debt retirement.

“We were able to pay off our $1.5 million note six years early. God provided money through the years  to buy the property and build the Worship Center and additional parking space at a cost of $2.3 million.”