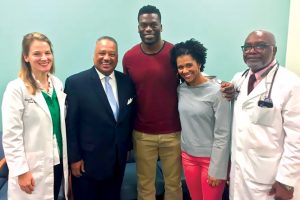 Watson, a veteran tight end with the New Orleans Saints, and his wife Kirsten donated a machine through the Psalm 139 Project for a center that is part of Baptist Community Health Services (BCHS) in New Orleans, the Ethics & Religious Liberty Commission (ERLC) announced Nov. 5. Psalm 139 is the ERLC’s ministry to help place ultrasound machines in pregnancy resource centers across the country.

Earlier this year, the Watsons largely funded an ultrasound machine for the Severna Park (Md.) Pregnancy Clinic outside Baltimore, where he played for the NFL’s Ravens the previous season. They made the donation—which resulted in the machine being installed in June—through the Evangelicals for Life (EFL) partnership of the ERLC and Focus on the Family.

“Benjamin Watson continues to demonstrate leadership both on and off the field,” said Dan Darling, the ERLC’s vice president for communications, after the New Orleans placement was announced. “His courageous advocacy for the sanctity of human life is inspiring.

“We are grateful to work with him to help young women in crisis see the humanity of their unborn children and make decisions for life,” Darling told Baptist Press in written comments. “The volunteers and staff who work at this center (in New Orleans) are heroes, showing the love of Christ to the most vulnerable in their community.”

In an Oct. 23 Instagram post, Watson explained, “Earlier this year we felt led to serve expecting mothers, fathers and their unborn children by placing ultrasound machines at… health services providers around the country. So many men and women struggle with making decisions for life but we know from experience the power and encouragement seeing inside the womb offers.”

Next to a photo of the Watsons standing next to two large boxes, he said they contain a machine that “will allow expecting mothers and fathers in New Orleans to see the precious life God has given them reminding them of its dignity, beauty and value.” He closed the post with: “Psalm 139.”

In Psalm 139, David testified to God’s sovereign care for him when he was an unborn child. He wrote in verse 13, “You knit me together in my mother’s womb.”

The latest machine donated has been placed at BCHS’ Andrew P. Sanchez Center in the Lower Ninth Ward of New Orleans. BCHS provides health care through four centers in underserved areas of the city. The churches of the New Orleans Baptist Association (NOBA), with the help of the Southern Baptist North American Mission Board, launched BCHS.

“The Watsons’ gift of an ultrasound machine to our medical mission will allow our SBC missionary-doctors to show new mothers their babies while those babies are still growing in the womb,” said Shawn Powers, BCHS’ chief executive officer and a NOBA missionary, in an ERLC news release. “Through those sacred encounters, our team at BCHS will have kingdom opportunities to connect thousands of woman to our local churches for their ongoing spiritual support and growth. The Watsons’ gift will save physical lives, but lives eternally as well.”

Powers tweeted Nov. 9, “Thank you @ERLC @BenjaminSWatson @drmoore Today one of our community partners referred a woman to us at Baptist Community Health. Thanks to you, she received a free ultrasound and free sonogram pictures. She even saw her baby sucking (its) thumb. Very exciting time!”

BCHS staff members have had more than 14,000 prayers and spiritual conversations with patients since the beginning of its ministry in 2014, Powers said in comments for the ERLC release.

The New Orleans placement marks the fifth in four locations this year involving the Psalm 139 Project. In addition to the Baltimore area placement, Psalm 139 placed a machine at the Liberty Women’s Clinic in the Kansas City suburb of Liberty, Mo., and two at the Downtown Pregnancy Center in Dallas.

The Psalm 139 Project not only helps place ultrasound machines in pregnancy resource centers, but it also funds the training of staff members to operate the machines. In the case of the Watsons’ gift to the New Orleans site, Psalm 139 identified the center, coordinated the placement and arranged training on the machine.

The ERLC tweeted Oct. 24, “We are so thankful for @BenjaminSWatson’s generous support of our lifesaving Psalm 139 project!” Watson responded on Twitter, “Thanks for allowing us to continue to partner with you as you serve these families.”

The Watsons participate in numerous need-meeting efforts. They started the One More Foundation in 2008 to spread “the love and hope of Christ to One More soul by meeting real needs, promoting education and providing enrichment opportunities through charitable initiatives and partnerships.”

In his 15th season in the NFL, Watson played with Baltimore in 2017 before signing with the Saints in the off-season. He had played for the Saints for three years, 2013-2015, before joining the Ravens. Previously, he played for New England and Cleveland.

The ERLC has collaborated with Focus on the Family’s Option Ultrasound Program on some of the machine placements. The ERLC and Focus have co-hosted EFL each January the last three years.