DANVILLE, Ky. (BP)—With four state high school football championships under his belt, four years playing at the University of Kentucky, holding the all-time receiving record at UK for a tight end, and playing for nine years in the NFL, including three Super Bowls, one might say Jacob Tamme has had a fulfilling and successful life.

However, the unsigned free agent who played last season for the NFC Champion Atlanta Falcons takes his successes—and challenges—in stride. 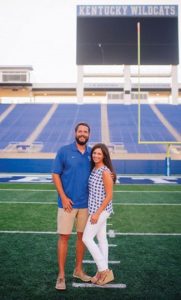 Jacob Tamme with his wife Allison at UK football field

Now 32, which he says is 70 in football years, Tamme is content at home on his family farm in Danville, Ky., where he and his wife Allison, are raising Angus cattle and feeder calves along with their two children, Lila, 6, and Luke, 2.

But what’s truly remarkable about Tamme is in spite of being a noted professional football player, he says his faith in Jesus Christ is of the utmost importance in his life.

As Tamme tells the story of his faith journey, he points to those whom God placed in his path for having impacted his walk with Christ.

While one might think that money, prestige and power could lead a rookie in the NFL astray from his Christian principles and small town roots, Tamme’s experience was just the opposite.

And it began at home.

“I was raised in a Christian home with wonderful parents. We believed in God and we believed in Jesus Christ. I’m thankful for my upbringing in Danville, being in a small town.”

In reaching the pinnacle of professional football by being drafted by the Indianapolis Colts in 2008, the small town boy was suddenly thrust into the national spotlight.

Tamme credited Christian teammates, the head coach, the chaplain and a spiritual awakening of sorts during a Good Friday service to staying the course.

“I had probably a dozen teammates there in Indianapolis who were strong Christian men and who were strong influences on me. I also had Tony Dungy as a head coach,” he said. Dungy is well known for his Christian faith.

“Eric Simpson is one of my best friends and mentors in the faith. His is the most profound display of a man who knew his Bible, knew his theology, but most importantly, knew Jesus and lived it out and that made a great impact on me,” Tamme said.

But it was these men, along with what happened on an Easter weekend that deepened Tamme’s walk with Christ.

“Man, there’s really a lot of power in Good Friday. Easter is not Easter without Good Friday, and that was the most remarkable worship experience I’ve ever had. All those things combined transformed my faith,” he said.

The Christian influences on Tamme’s life continued as he played at Denver, and then Atlanta.

“I’ve been pretty blessed in the three places I’ve been. We’ve always had good chaplains, and there’s always been an opportunity to be who you are,” he said.

And being around non-Christians, Tamme says, didn’t change who he is as a follower of Christ.

“It really doesn’t matter what situation I’m put into or what people around me think. I’m going to be who I am. I don’t apologize for being a Christian, and there are places where it’s tough to be a Christian right now. It’s about being who you are. I think you earn more respect from those around you by being true to who you are and not trying to hide your faith.”

Just as Tamme has to remain in top physical condition when competing for a spot on a NFL team, he knows staying spiritually fit is just as important.

“There is something truly supernatural that happens when we read the Bible in a yielding spirit, in a spirit that’s seeking truth and understanding,” he said, noting there are times he falls short in this area.

“What I need to do is read my Bible more. I don’t do it enough. The Lord is calling me to more and to be more responsive to that.”

Tamme’s prescription for spiritual growth and vitality is as simple as running plays in practice every day.

“The No. 1 thing you can do is to take 15 minutes in the morning and start your day off in the Word and listening to what it has to say. That’s where you start. That’s been transformational for me.”

Equally transformational in Tamme’s Christian walk has been his and Allison’s involvement in a local church.

“(Danville, Ky., Calvary) has been great for us. Allison has been going there with her family for quite a long time. Calvary has really opened their arms to me by being extremely welcoming.

“We have a really good nucleus of young adults in our Sunday School class. Our class is so much fun, we love our Sunday school class. And Brent Rowe, the pastor, does a fantastic job.”

With his hectic travel schedule, it matters when the family misses church services.

“If we miss I feel it. It’s such a good community there, and there’s something special about worshipping with fellow believers.”

Even with mentioning how God has used others in strengthening Tamme’s spiritual journey, he praises the love of his life, his high school sweetheart, Allison, for being a godly helpmate.

Allison was the manager on Tamme’s high school team, “changing chin straps on helmets and handing out water bottles back in 2000,” he said.

“If I didn’t have her as my partner, I would probably be going down a lot of different paths that wouldn’t be good. She’s been a wonderful companion on the journey.”

Tamme noted, “Football for us has never been the main thing.”

“It’s directed our lives in certain ways as we’ve followed the path playing NFL football,” he said. “It’s been a wonderful experience but football has never been my identity. Identity should be found in Christ, as a follower of Christ. And when that happens, it’s amazing how much better you are to your family. Family experiences get richer and deeper because you’re more intimately connected with Christ.”

While Tamme recovers from a season ending shoulder injury in 2016 and being declared an unrestricted free agent from the Atlanta Falcons, the future is uncertain as to playing in the NFL.

This situation we’re in is probably the ultimate amount of uncertainty.”

However, the uncertainty of the situation doesn’t worry Tamme.

“I played nine years,” he said. “We’re very happy here at home in Danville and central Kentucky. God has the right plan for us and it’s beginning to work itself out for us. We’re trusting in that. No matter which way it goes, it’ll be good.”