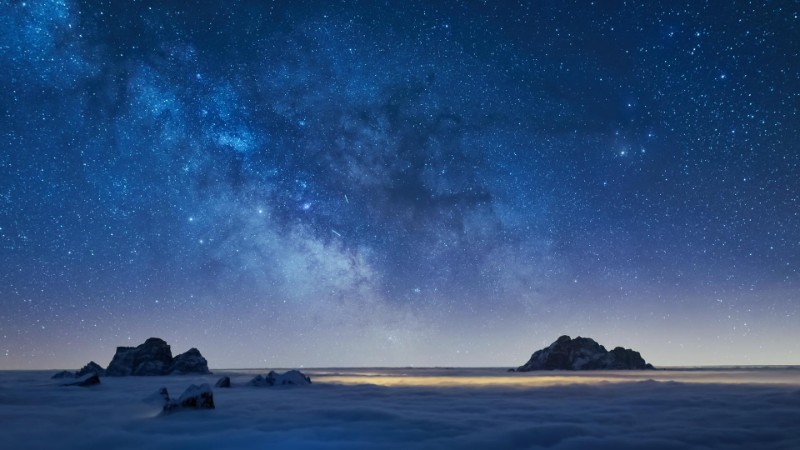 Most nature documentaries film their animal subjects during the daytime. That way, the filmmaker can easily capture the unique characteristics and exquisite colors of the animals—and the viewer at home can follow the on-screen action without any confusion.

A new Netflix documentary, though, turns this logic on its head, proving that a nature film shot in the dark can be just as entertaining.

Titled Night on Earth, the six-part original series uses the latest camera technology to record the actions of animals—lions and monkeys and everything in between—at night.

“Using new technology, we can see into the blackness to discover a hidden side (to the world),” the narrator tells us.

This documentary, though, is far more than a series filled with thermal images. Much of the documentary uses new low-light cameras that can film ultra-high definition in the dark, and in color. The result: stunning images of animals under the moonlight that (almost) appear as if they were filmed in sunlight.

Night on Earth gives us a peek at animals on the plains, in jungles, in cold environments and deep in the sea.

It’s a unique celebration of God’s creation that will entertain you, yes, but also might lead you to worship and repeat the words of David: “On the glorious splendor of your majesty, and on your wondrous works, I will meditate” (Ps. 145:50).

‘The Red Sea Miracle’ (theaters, Feb. 18)—Filmmaker Timothy Mahoney continues his investigation into the miracles of the Old Testament as he searches for “patterns of evidence” that match the biblical narrative. In Red Sea Miracle, he looks for evidence for the crossing of the Red Sea. (If you’re curious, he always sides with historical Christianity, although he interviews liberal and conservative scholars.) The Red Sea Miracle is in theaters for one night only: Feb. 18. Part 2 in this series will be in theaters May 5. It’s biblical archaeology for the layperson, and is unrated.

‘Free Burma Rangers’ (theaters, Feb. 24-25)—Missionaries Dave and Karen Eubank risk their own lives to deliver food, medical services and hope to war-torn parts of the world. The documentary follows the incredible 20-year journey of the Eubanks, who formed a humanitarian movement that serves in locations such as Burma, Iraq and Syria. The footage alone makes this one worth watching. It’s in theaters for two nights: Feb. 24-25. It’s unrated and includes troubling war images but no coarse language.

‘Heavenquest: A Pilgrim’s Progress’ (DVD, streaming)—It’s the backstory to John Bunyan’s classic story The Pilgrim’s Progress—and although not written by Bunyan himself, it’s a worthy companion. This 2019 film follows Evangelist as he travels from the evil Southern Kingdom to the peaceful Northern Kingdom. Along the way, he becomes a servant of the one true King. It contains inspiring allegory. Due to adult themes, this one may not be appropriate for young children. It was released on DVD and digital platforms Feb. 4. Unrated.

‘Beautiful Day in the Neighborhood’ (DVD, streaming)—A journalist learns to forgive those closest to him after interviewing Fred Rogers of Mister Rogers’ Neighborhood. The movie includes a magnificent performance by Tom Hanks, who plays Fred Rogers and perfectly copies his speech pattern and mannerisms. Beautiful Day in the Neighborhood includes powerful lessons on kindness and forgiveness. It’s not 100 percent kid-friendly, but for older family members, it’s marvelous. Language includes h– (4), OMG (2) and d–n (1) — none of it spoken by Rogers. Rated PG for some strong thematic material, a brief fight, and some mild language. It was released to digital platforms Feb. 4 and comes to DVD/Blu-ray Feb. 18.