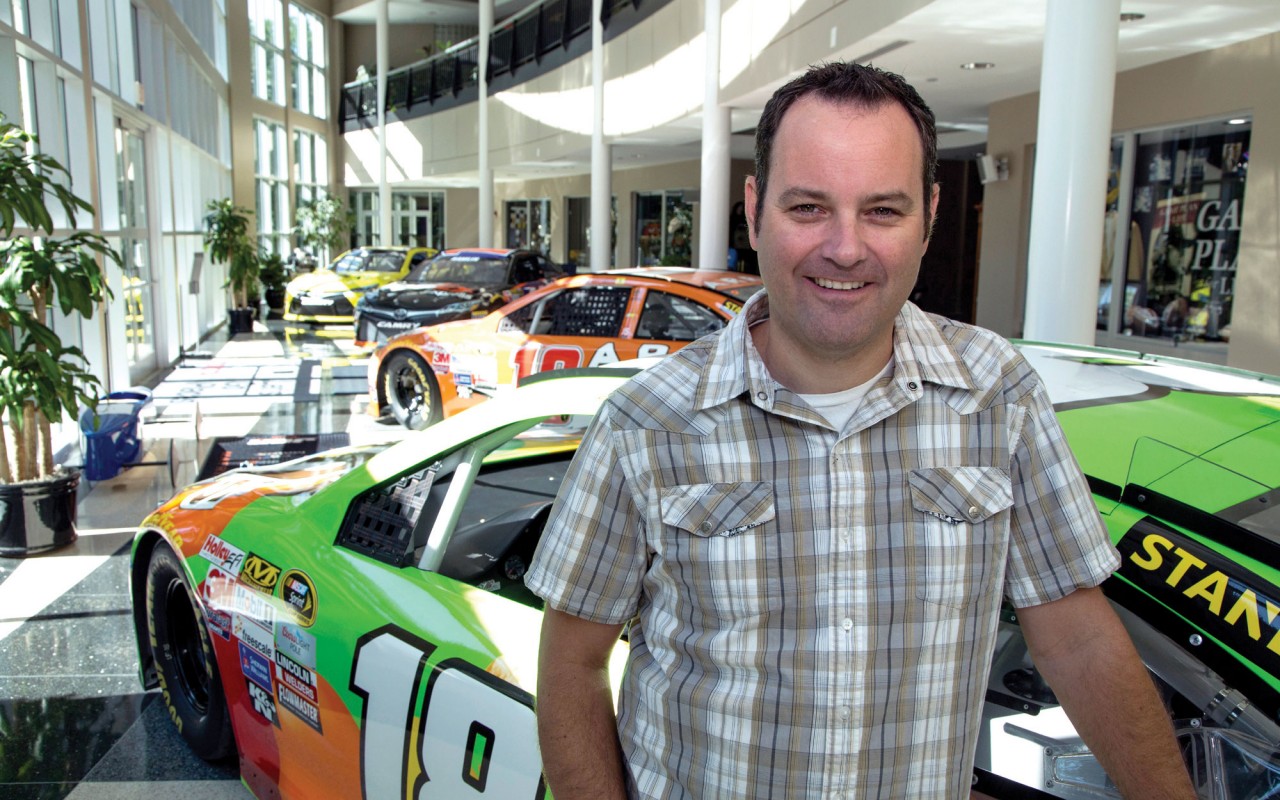 HUNTERSVILLE, N.C. (BP)—You don’t have to like NASCAR to be part of Mission City Church. But for now, it appears to help.

Enter the front door and you’re in a multimillion-dollar showroom of race cars that are faithful copies of the actual Toyotas that the four Gibbs teams have driven to NASCAR victories across the country. Lobby display windows are packed with trophies, awards and souvenirs.

The modern building is part executive offices and part garage. There’s even a window where one can look down at the outer garage area. But pastor Kyle Dillard said the real race cars are tweaked in a very secure garage behind closed doors, safe from prying eyes. He points down to a checklist where every bit of each highly sponsored car—down to the last nut and bolt—is tracked for repair or improvement.

Church services are held in a well-equipped auditorium that seats 90 people, though the fledgling congregation will need a few more months to fill it. The church started meeting about a year ago in the Dillard home. Several months later, they were ready for an outside meeting place.

They tested the move by asking that God not let it rain on Sunday nights at 6 p.m. when they met. “It rained a lot last summer, but it never rained on a Sunday night,” Dillard said.

How did meeting in a race car shop come about? It became possible only because Dillard got to know some of the Joe Gibbs Racing staff. “You can’t live in this town and not know NASCAR people,” he said.

Finding suitable and affordable meeting places is one of the biggest challenges newly planted churches face.

Even with financial and other help from the Baptist State Convention of North Carolina’s church planting team, new churches often must meet in schools or other public buildings. And that can require setting up a trailer full of seats, pulpits and sound systems each week.

“We are so glad we’re not having to do that every Sunday,” Dillard said. “Having this place to meet is such a blessing.”

The convention’s church planting team worked in partnership with churches, associations and networks of churches to help them start 103 new churches during 2014. That works out to a new church started about every three days on average. North Carolina Baptists support this ministry through the Cooperative Program and their North Carolina Missions Offering.

Helping start new churches is one of the many ways the Baptist State Convention is helping reach North Carolina’s estimated 5.8 million lost people for Christ.

Dillard is one of about 150 church planters getting support from the church planting ministry. He said he has developed great respect for Richard Lee, the convention’s urban church planting consultant, who is working some 20 new church plants in the Charlotte area and comes by for regular meetings.

A music graduate of Appalachian State University, Dillard was a traveling Christian concert musician for years before he became a worship leader at Willow Creek Community Church in Chicago’s suburbs, a mega-sized congregation that is one of the nation’s largest. He later served with Lake Forest Church in Huntersville and once commuted to Boston each week for seven months to lead worship on Sundays for a church there.

Dillard said he and his wife prayed over church job offers from across the country and eventually felt led to the Charlotte area, not far from his hometown of Belmont.

“We prayed for God to show us some direction. He did, and here we are,” he said.

View all posts by Mike Creswell