Mossman makes a move from athletics to being a pastor 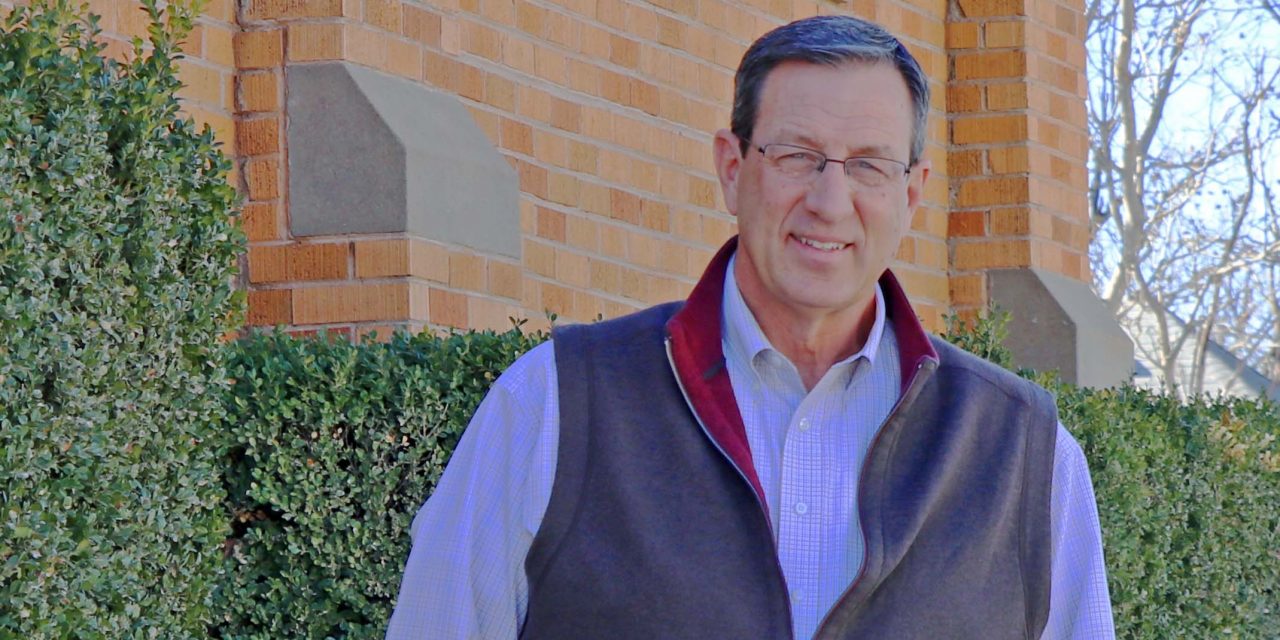 His retirement was reported in The Oklahoman earlier this month. After 20 years of serving in the athletic department at the University of Oklahoma (OU), Kenny Mossman was making a career change to go into pastoral ministry. 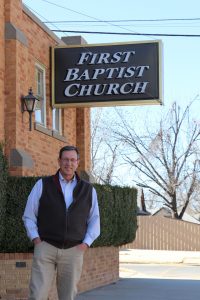 Kenny Mossman stands in front of Carnegie, First, where he was recently voted unanimously as the church’s new pastor.

“I think there are people who probably think I’m nuts,” he said during a recording for the Messenger Insight podcast. “There are people who love college sports in this state on a high level, and they might look at this decision and wonder about my sanity.”

“It was a pretty rewarding experience because you get to do and experience things at OU in the athletics realm that are very unique compared to other places,” Mossman said about working at OU. Overall, he worked in college athletics for nearly 40 years. “It was amazing. I had been to one bowl game before I arrived at Oklahoma. In my 20 years, we never missed a bowl game. If you can name a bowl game, there’s a good chance—at least of the higher profile games—I got to work it.”

He also mentioned being a part of four Heisman Trophy winners, men’s and women’s basketball teams reaching the Final Four and being the sports administrator for the OU softball team, which has won numerous national titles.

But now, Mossman is pursuing full-time vocational ministry. A faithful member of Oklahoma City, Emmaus, he has been a diligent adult Sunday School teacher. He also spent a lot of time with Fellowship of Christian Athletes as a state board member. However, for the last few years, he believes God was preparing him to be a pastor.

One day, Hance Dilbeck, former executive director-treasurer of Oklahoma Baptists, and Mossman were having lunch.

“Out of the blue, he asked me, ‘Have you ever thought that the Lord would call you into ministry?’” Mossman recalled about that significant meeting with Dilbeck. “I told him ‘Yes, I have thought about that but on a surface level.’ Hance gave me a convicting look and said, ‘I think He is.’”

Dilbeck told Mossman to confirm this calling with his pastor, Owen Neese.

“I remember sitting down with Kenny,” Neese said. “He invited me to lunch, and I just had this strong sense that God was calling him into pastoral ministry. I think I almost beat him to the punch in telling him why we were there that day.”

From there, Neese set Mossman on a path of ordination, which consisted of taking seminary courses online and going through an ordination process at church. He then receive numerous opportunities to preach around the state. Serving in pulpit supply, Mossman said, definitely “fanned the flame. It was the confirmation that I needed from God that, yes, this was something I was called to do.”

Mossman was preaching on Sundays while also fulfilling his role on Saturdays at football games. Neese said this was not a total change for Mossman.

“He’s not doing anything completely different because he has always been committed to the local church,” Neese said. “There were away games OU was playing, and I’d think there’s no way Kenny would be there (at church the next day). But he was there the next morning. He’s always valued being involved and serving in the local church.”

Mossman then came to a point when he wondered if maybe he was experiencing burnout with his work at OU. However, he concluded it was holy discontentment.

“I wasn’t getting fulfillment out of it anymore,” he said. “I found myself being in a full stadium and looking across the landscape of 80,000 people. My thoughts weren’t so much on how are we going to entertain these people, but honestly, I wondered to myself, ‘How many of these people are saved?’ When you start to look at things through an eternal lens, it will change your perspective in a hurry. It did for me. I just no longer felt that what I was doing there was as meaningful as I once thought it was. Now, as I look back, I know God was changing my heart and giving me a new desire. That desire was to more overtly spread the Gospel.”

He did clarify that it is possible for a Christian to have a ministry no matter the occupation. “I did have a ministry,” Mossman said. “And that platform provided me many opportunities to go speak for Christ. But it escalated beyond that to a point where I could feel the Lord was calling me to be a pastor.”

Recently, Mossman has been serving as interim pastor at Carnegie, First, and on Jan. 23, he was voted unanimously to be the church’s full-time pastor. This church in southwest Oklahoma had been pastored by Arthur Blount for nearly 40 years, before his recent passing. Mossman said this church has energized him since he’s been their interim pastor.

“It’s a small town of less than 2,000 people, but they took 71 young people to Falls Creek last summer and have 40 youth regularly on Wednesday nights,” Mossman said about Carnegie, First. “They truly are ministering to Caddo County. They are a fun group of people to be with because they are not interested in sitting around and ‘playing church.’ They want to impact their area for Christ.”

Along with the encouragement and inspiration Mossman receives from serving Carnegie, First, he also appreciates the support he gets from Oklahoma Baptists across the state.

“It’s a neat thing to go into the pastorate as an Oklahoma Baptist because of the support system that is in place, (and that includes) the whole network of pastors across the state,” he said. “If it’s ok to be proud of a denomination, I am really proud to be a Southern Baptist in Oklahoma.”