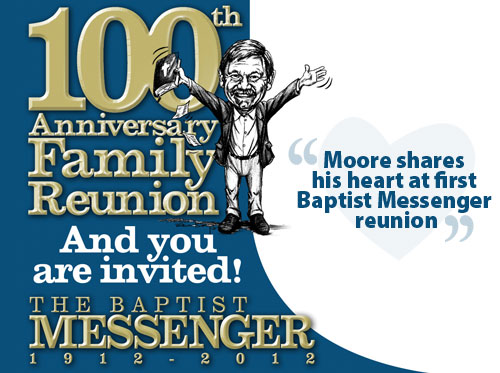 Walker Moore, president of Awe Star Ministries in Tulsa, said many Christians today have lost the sense of “awe” described in Acts 2:43 as he addressed those attending the first in a series of Baptist Messenger reunions March 30.

Hosted by Oklahoma City, Putnam City, the event was held in conjunction with the Baptist General Convention of Oklahoma newsjournal’s 100th anniversary celebration. The Messenger officially celebrates its 100th birthday on May 15.

In addition to Moore’s message, the audience got the chance to gain some insight about his personality and ministry when Putnam City pastor Bill Hulse, who was a pastor in Tulsa for several years, conducted a brief “interview” with the popular writer who has penned his Rite of Passage Parenting column for the past 15 years in the Messenger.

Moore, in his message, said, “In Acts 2:43, we find the very first characteristic of the very first church: ‘And everyone kept feeling a sense of awe.’ But ‘awe’ was something I didn’t understand. What was the awe all about?

“As I thought about it later, I realized this is what the first disciples felt on the day of Pentecost. They were scared to death. Their Leader had risen back to the Father, and they were alone in an open room when the Holy Spirit descended upon them. At the same time, they were excited. They went out into the streets where Peter preached the first sermon under the power of the Holy Spirit, and 3,000 believed. Scared to death and excited all at the same time: that’s the awe.

“God has created us to be awe-some people. He wants us to follow Him. That’s scary and exciting at the same time. As I travel the world preaching the Gospel, I see very few people who have the same characteristics as the first church. What will it take for us rediscover the awe of God? Acts 2:42 gives us some clues: ‘And they were continually devoting themselves to the apostles’ teaching and to fellowship, to the breaking of bread and to prayer.’ I call these clues the awe factors.

“The enemy tries to tell us we can choose only one or two. You can serve in the worship, discipleship or even the prayer ministry of your church and there you stay, stuck. But New Testament believers were involved in all four disciplines. And we wonder why they had the awe of God!

“Do you know what happens to people who live and dwell in the awe of God? The Bible says the very first church added to their number daily. Could it be that we’re trying to attract people to the Kingdom through programs, when God has already decided how to grow His church? When a lost world sees His children living, dwelling and abiding in the awe, they’ll know what kind of Jesus we serve. Have you experienced the awe?”

Additional dates and times will be announced at a later time.