Ministry Milestone: BGCO board recognizes Jordan for 20 years of service 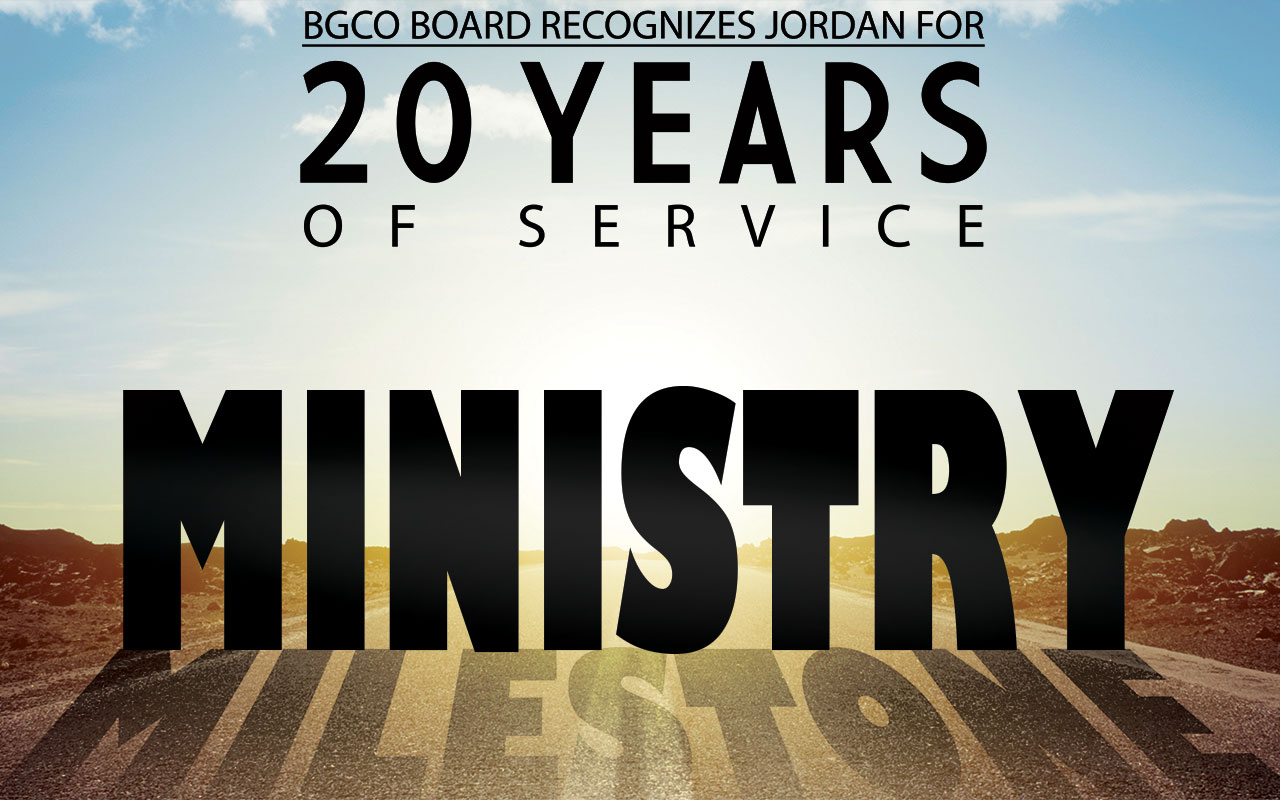 Hance Dilbeck, president of the Baptist General Convention of Oklahoma (BGCO), said Anthony Jordan “has a pastor’s heart.” At the May 17 BGCO board meeting, Dilbeck, pastor of Oklahoma City, Quail Springs, expressed his appreciation for the 20 years Jordan has served as BGCO’s executive director-treasurer saying “(Jordan) continues to operate out of that shepherd’s heart, which I think, among other things, means he has a sensitivity to the Holy Spirit but also has a sensitivity to people.”

When the BGCO board met in May 1996 and announced Jordan’s installation as executive director-treasurer, the Baptist Messenger reported BGCO President Charles Graves, former longtime pastor of Oklahoma City, Quail Springs, offered a challenge to Jordan to “keep up his personal growth in Christ, to do the things he felt God leading him to do, to maintain an effective witness and to be as good a director as he has been a pastor.”

“He has very much shepherded this convention,” said Dilbeck. “It’s not hard to move people. It’s not hard to keep them together. But it’s very hard to move them together. And that’s what a shepherd does. And Dr. Jordan has done that effectively. Now, for 20 years, that is the longest ever in the history of our convention. There’s a reason why nobody has lasted that long. It’s not easy work.”

“He loves the Lord. He loves the pastors. He loves churches,” he said. “We need to recognize the historic impact that his passion for the pro-life cause has had in the state of Oklahoma. In my mind, he’s number one in that regard.

“He is respected across our convention,” Dilbeck continued. “Everywhere I go, I continually meet people who say to me, ‘You have a great state convention.’ That’s because (Jordan’s) leadership is very much the ‘dean of the executive directors.’ Remember, he was one of the key Southern Baptists who produced the Baptist Faith & Message 2000.”

Dilbeck concluded his remarks by talking about Jordan’s missional leadership.

“He has a passion for missions and evangelism,” he said. “He pioneered missions partnerships. That wasn’t happening on the state convention level until Dr. Jordan took the helm. His legacy, in my mind and in many people’s mind, will be Falls Creek. The work at Falls Creek and CrossTimbers has been phenomenal. The facilities, $55 million plus, that he has raised to bring the facilities to the 21st Century. We’ve forgotten this, but from my vantage point, he was bringing the program into the 21st Century. That’s not driven by love for Falls Creek. It’s driven by his passion for evangelism. His desire to see lost people saved.”

Board members spent time in prayer for Jordan as Nick Garland, pastor of Broken Arrow, First, voiced his thanks.

Jordan addressed the board, sharing his appreciation for serving 20 years, thanking many people and sharing what has made his time as executive director-treasurer “so remarkable.”

“It is the staff that I work with day in and day out,” he said. “They are godly, committed people who encourage me, challenge me, keep me at my best. (I am) thankful beyond words for the pastors and directors of missions that I have had the privilege of being able to walk beside for these 20 years.
Ministry out of this building is about the local church, not about what happens here. The BGCO could go away, but I’m telling you, until Jesus comes, the local church will not. I am just beyond thankful for the opportunity that I have had. Whatever the time the Lord allows me to stay in this role, I pray that I will stay faithful to Him and to His task. And then when it is all said and done, the most important, significant thing we do is to lead our churches to bring people the Gospel of Jesus Christ and know Him in a personal way and to disciple people, so they will go out and share the Gospel and see that process go over and over again.”

Jordan also shared with the board his thoughts about Charles Matlock and Jonathan Wright, the two employees at Falls Creek Baptist Conference Center who were killed in a work-related accident. Jordan said the BGCO will find a way to memorialize these men at Falls Creek.

Other subjects Jordan addressed included the involvement of Oklahoma Baptist Homes for Children (OBHC) in the area of foster care. He said OBHC’s new program, “One Such Child,” is a great source for churches in Oklahoma to use to be involved in helping foster families.

Doug Melton, chairman of the Mobilization Committee, proposed a recommendation for a name change. His recommendation was stated, “That the Robert Haskins School of Leadership be renamed Robert Haskins School of Christian Ministry to reflect its renewed commitment of providing practical ministry instruction; and the adoption of the organizational structure and diplomas for the following groups, but not limited to: Hispanic, Native American, African American, Asian and Bi-Vocational/Smaller in Attendance churches.”

“It is going to be a tremendous work that is going to happen in our state,” said Melton, pastor of Oklahoma City, Southern Hills, who spoke on the benefits of the Haskins School name change and the institution’s new emphasis. “Those five groups will be further equipped for pastoral ministry.”

The BGCO’s final board meeting in 2016 will be Sept. 13 at the Baptist Building.