Messengers ‘Round Up’ in Houston for SBC Annual Meeting 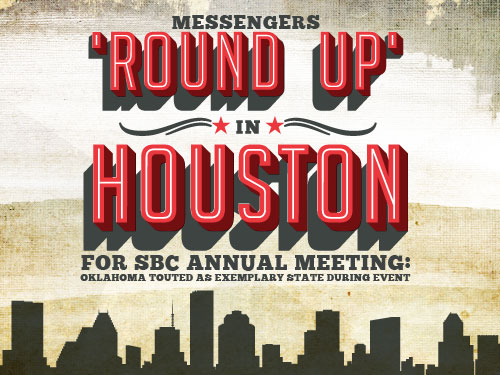 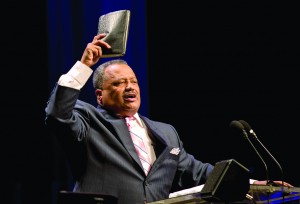 Messengers to the 2013 Southern Baptist Convention Annual Meeting re-elected Fred Luter, Jr., to a second one-year term as SBC President. He was unopposed.

HOUSTON, Texas—More than 5,000 Messengers from throughout the Southern Baptist Convention (SBC) gathered for the Annual Meeting, which met in Houston June 11-12. On more than one occasion, leaders and speakers pointed to Oklahoma as a shining example of how to give and serve.

Praising Porter and Oklahoma Baptist disaster relief volunteers for their response to the recent devastating tornadoes, Ezell touted the “Oklahoma Standard.” Porter said, “The greatest way people can help is to pray for us.”

Earlier in the morning, Fred Luter, Jr., who was elected to a second one-year term as SBC President asked Messengers to the annual meeting to give financially to Oklahoma Disaster Relief (DR) at www.okdisasterhelp.com.

During a media conference, Tuesday afternoon, Luter also was asked to give thoughts about the Oklahoma tornadoes and the SBC disaster response. “First thing I thought about was Katrina,” he said, referring to the 2005 hurricane in New Orleans, Luter’s home area. “When I saw the devastation there in Oklahoma, I looked at my wife and said it reminds me so much of Katrina. It looked like it was the same faces with just different names.” 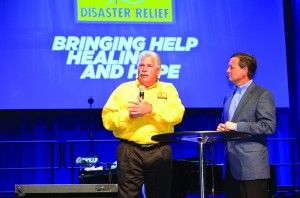 Sam Porter, disaster relief director of the BGCO, is interviewed by Kevin Ezell, president of North American Mission Board, during the NAMB report at the SBC Annual Meeting.

Luter also acknowledged Porter who led Oklahoma DR efforts in New Orleans, saying Porter helped salvage his house. “To see the devastation, and if no one has been through that, it’s really a difficult time when one day you can have everything in the world, and the next day, you’re homeless. You don’t have anything at all,” he said. “Immediately, I prayed for them that God will do for them in Oklahoma what He did for us in New Orleans. And Southern Baptists across the country came in droves by the thousands to help rebuild. I’m proud of a lot of things of this convention, but one of the things I’m really proud of is our efforts in Disaster Relief. I believe we are second to none.

“My words of encouragement would be to hold on and hold out,” he said, thinking of Oklahoma tornado victims. “It seems dim right now. It seems dark right now. But God will get you through it. He got me through it, and He will get those folks in Oklahoma through it as well. Just hold on to your faith. Trust in God and depend on all the help and assistance you will get from across this country. It’s going to be all right.”

When Frank S. Page, president and CEO of SBC Executive Committee, delivered his Tuesday afternoon Executive Committee Report at the SBC Annual Meeting, he also put the spotlight on Oklahoma. He pleaded for greater participation of churches in reporting as well as in giving, declaring an application of “Christ-like selflessness.” 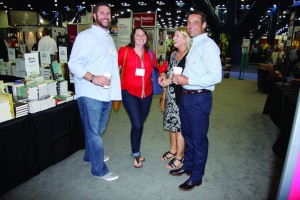 From left, Johnny Montgomery and wife Leigh of Red Oak, First, share a light-hearted moment in the exhibition hall with Kelly and Blake Gideon of Edmond, First.

Page gave an example of “Christ-like selflessness” with a story of an Oklahoma Christian businessman who recently sold his family business and applied “storehouse tithing.” The profits of the sale of the business were worth many millions, and Page said this family decided to give a large amount to the local church.

“I didn’t ask (the pastor’s) permission, but it’s Oklahoma City’s Quail Springs,” said Page. “That pastor (Hance Dilbeck) decided that gift would be a part of the church’s undesignated receipts. By the way, that church gives 13.5 percent to the Cooperative Program. They could have taken that money, built some more buildings, bought the pastor something fancy. They could have done a lot of things. But they decided to do what they’ve always done and to be faithful in Christ-like selflessness.”

Page proceeded to explain how Quail Springs gave from this financial gift to the BGCO, and the state convention sent 50 percent of its proceeds to the national level. Normally, the BGCO sends 40 percent, but since monthly financial goals were met, Page described, the convention decided to stay with the “Christ-like selfless” plan of giving 50 percent.

“And you say, ‘Well, what did it all matter in the end?’ Let me tell you what happened,” Page said. “Because of that one gift, and the succession of Christ-like selflessness, the International Mission Board received more than $750,000 extra. The North American Mission Board received more than $330,000 extra and $320,000 was shared by the six Southern Baptist seminaries. Lesser amounts went to other entities of our convention, such as the ERLC and the Southern Baptist Convention operating budget. You see how Christ-like selflessness ministers to all?”

Page went on to express equal gratefulness to many other churches throughout the convention. 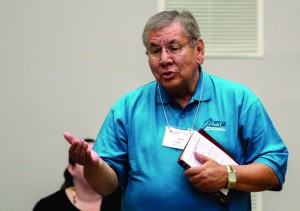 Emerson Falls, president of the Fellowship of Native American Christians, speaks during a meeting of the organization June 10 at the George R. Brown Convention Center in Houston.

Oklahoma Messengers were treated to a dinner Tuesday night called “OK in the 713.” The event, sponsored by Oklahoma Baptist University and the Baptist Foundation of Oklahoma, was held at the George R. Brown Convention Center, which is in the 713 area code.

Missions stories from Africa, Asia and the Americas highlighted the 125th anniversary celebration of the national Woman’s Missionary Union during their 2013 Missions Celebration and Annual Meeting, June 9-10 at the Hilton Americas in Houston.

In addition, 2013-14 marks the 100th anniversary of missions education for girls (Girls’ Auxiliary, Girls in Action and Acteens) as well as the 25th anniversary of WMU’s Second Century Fund, which was birthed at WMU’s centennial to fund leadership training for women worldwide.

With the theme “The story lives on,” the meeting featured testimonies of missionaries from both the International and North American Mission boards, birthday gifts from WMU friends and video greetings from WMU partners throughout the world. (More about the WMU Missions Celebration and Annual Meeting will appear in the June 27 Messenger)

In official Convention business, Messengers on June 12 passed a resolution opposing the Boy Scouts of America’s new membership policy admitting homosexual youth into Boy Scouts. The resolution thanked those who fought against the change and expressed concern that homosexual Scout leaders may be allowed next. The resolution also affirmed the right of families and churches to decide whether to sever ties with the Scouts and suggested the Royal Ambassadors program as a potential alternative (www.wmu.com/ra), and called for a change of leadership at the national Scout level. 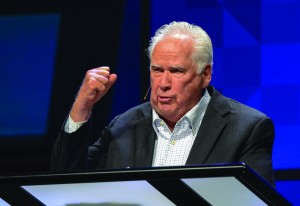 John Bisagno, after whom the Falls Creek Tabernacle is named and pastor emeritus at Houston, First, speaks during the evening session June 9 at the SBC Pastors’ Conference.

Several resolutions were referred to the Executive Committee (EC) for study to be reported back to the SBC in 2014. They were:

• That the Executive Committee publish a theological position paper on Southern Baptists’ use of gender-neutral Bibles, reconsidering the three SBC resolutions opposing the use of such translations, and consult the “scholarly work found in the CBMW (Council on Biblical Manhood and Womanhood) article, ‘An Evaluation of Gender Language in the 2011 Edition of the NIV Bible,’” offered by Tim Overton, Muncie, Ind., Halteman Village.

• That a special task force be appointed to explore youth programs to teach leadership skills and moral standards once offered by the Boy Scouts of America “seeing they have lost their way and lost their moral compass, the Bible,” submitted by Harold M. Phillips, messenger from Port Deposit, Md., Pleasant View.

• That the SBC reevaluate Article III of the Constitution, particularly subpoints 1 and 2 to update minimal standards used to define participating churches and messengers, offered by John Mark Yeats, pastor of Fort Worth, Texas, Normandale. Yeats noted that the base gift of $250 required to send each additional messenger to the SBC has not changed since 1888, “a sacrificial amount then, but a token amount today.”

• A motion by Paul Cunningham, a messenger from Oklahoma City, Northwest, asked that reserved seating at the front of the auditorium be open to all messengers and not reserved for groups other than the handicapped. The Committee on Order of Business reported that the motion “was well received” and will be implemented.

For more information and coverage on the 2013 SBC Annual Meeting, visit www.sbc.net or follow
@SBCMeeting on Twitter.