Messenger ad gets two churches on the same page to sharing space, ministry

The Messenger ad, earlier this year, that brought OKC, Gideon and MWC, Lighthouse together

MIDWEST CITY—A discussion about advertising in the Baptist Messenger led two pastors to get on the same page about sharing a meeting place for their congregations. One congregation’s membership is predominantly Anglo, while the other is primarily African American. Now they share the same location and are increasingly working together to reach their community. 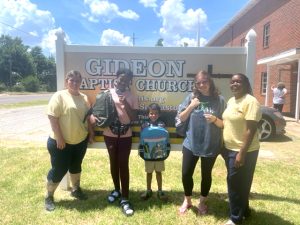 It all started when Greg Rogers, pastor of Oklahoma City, Gideon, started looking for a place for his church plant to meet because they lost their meeting place during the COVID lockdowns.

“We had been meeting in one of our church member’s homes,” Rogers explained. “I spoke to the Baptist Messenger about placing a classified ad because we were looking for a building to meet in, a place our church could settle and grow into.”

In the meantime, Rogers mentioned to Dave Henderson, a friend who is pastor of Midwest City, Lighthouse, that he was placing a classified ad seeking a place for his church. Henderson suggested Rogers consider meeting in a less-used part of his church’s building on Northeast 10th Street.

“I saw Pastor Greg at one of the Capital Association meetings, and he mentioned he was placing an ad and looking for a place to meet,” said Henderson, who has been with Lighthouse for 17 years. “We committed to pray for them, and while praying, I felt led to talk to him about our churches sharing our building. I believe that if God gives you a facility, you must take care of it and use it for ministry.”

Lighthouse made a few renovations to their building in what was formerly a Sunday School space, creating an area for the Gideon congregation to lease as a worship center.

Though the congregations are independent and autonomous from one another, they have found occasions for shared ministry.

“We have had times of fellowship; we celebrated an Easter breakfast together this year,” Rogers reported. “We had another time where we got together to get to know one another and share the Word. If we have something, we invite them. If they have something, they invite us.”

Henderson said he is grateful that the two pastors can help one another when ministry calls for it. “(Rogers) has preached two or three times for our congregation when I have had to travel,” he said.

Gideon has begun reaching out to families in the community by adopting a nearby elementary school, sharing backpacks with school supplies at the beginning of the school year, and helping children with food insecurities with essential food items.

“We had a back-to-school event here at Gideon,” Rogers said. “The North American Mission Board provided us with backpacks filled with school supplies, which we gave out. Lighthouse members came over and helped with the distribution.”

The two congregations see that the potential to reach their community is enhanced when they work together. The pastors are currently working on planning how to establish a children’s ministry that both churches can share.

“I love Pastor Greg,” Henderson beamed. “He and his wife Sharron are doing a tremendous job in ministry. God had a plan long ago for us to be together, it looks like.”

“I love the fact that our people (in both churches) can enjoy fellowship together,” Rogers said. “Brother Dave is an awesome guy.”

The two churches got together because of a newspaper ad, but now they are on the same page, working together to publish the Good News.