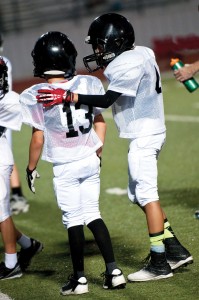 Coaches Gower and Jensen suggest applying a mentoring model as an alternative to ‘rite of passage.

“Bullying” has been a popular word lately. It is a terrible thing, and no one should be allowed to use oppressive tactics over somebody else.

For the last two weeks, sports media has been all abuzz over Miami Dolphins’ offensive linemen, Jonathan Martin and Richie Incognito, and why they are no longer a part of the NFL squad. The New York Times reported Martin left the team after he was “subjected to humiliations,” which involved “hazing and workplace abuse.” Incognito has been alleged to be the main culprit of “bullying” Martin and was suspended indefinitely by the Dolphins.

Of course, the National Football League (NFL) is investigating the matter, and multiple reports will continue to ensue. Further development is likely to be presented through the airwaves and other media sources.

Sports fans will hear more about Martin and Incognito, as well as other off-field issues and personalities with the Dolphins, than they would desire to know, and the various reporters and football analysts will provide their “expertise” about this “bullying epidemic” that is a billowing dark cloud over the gridiron sport.

So how should Christians, specifically Christian coaches, handle the hot topic of bullying? Is there a way to end this growing problem?

“There is no place for bullying, hazing, rite of passage or whatever you want to call it, at any level,” said Gower. “In my opinion, it goes back to who people are. God created every person, and they were all created equal. Every human being deserves to be respected and treated with dignity, no matter who they are. No matter if they are a senior or a freshman on a team, or in the NFL, if they are a veteran or a rookie, I don’t think there is any place for it at any level.”

Gower said the focus that he emphasizes is more team-building, a “we are all in this together” approach. He intends to get across with his older players that, as a team, they need the support of the younger players. The way to gain support is through helping them improve, not go through initiations.

“I term it as a mentoring setting, where I think it’s important for the upper classman or veteran to take the younger ones under their wings,” said Gower. “This is how things are done, explaining what it is like, and showing them what they are supposed to do.”

Jensen said intimidation tactics are too prevalent. “It’s a lot more common than what many people think, and I think it’s a product of how our society has developed. I think it’s unfortunate.”

Like Gower, Jensen emphasizes mentoring with his team. “I’ve wanted to create a culture that was different, one of older players, the veterans, taking on a mentoring role instead of feeling like they need to put younger kids through a rite of passage or initiation, or anything like that. I think it would create a better environment if somehow these mentoring systems (take effect) rather than these rites of passage that have developed in our society.”

Both Gower and Jensen said they do not tolerate players taking advantage of younger players. Gower said if a player of his ever did such tactics it would involve “meeting with the young man in what we call ‘post-practice quality time,’ which may mean extra running or doing other athletic drills.”

Jensen added he uses a biblical model involving II Tim. 4:2. Paul is advising his young disciple Timothy to “reprove, rebuke and exhort.” The OBU coach said to reprove is to correct a player’s behavior; to rebuke is to be stern with a player when needed; and to exhort would be to encourage them when they do something right.

“’Reprove, rebuke and exhort is a great model for coaching,” Jensen said. “Unfortunately, I don’t feel like we have mastered that yet, or I have mastered it yet as a head coach. But I see that as the goal. I see that as something we need in our society to understand the meaning of those three words and how to accurately and adequately apply those in every situation.”

Along with encouraging mentoring as the alternative to bullying, Gower and Jensen said the practice of humility also is part of the solution.

“To be humble, it’s one of the traits of a Christian,” said Gower. “It’s not the prideful nature. It’s not what you have done but what God has done through you. But also, it’s about what the team has accomplished; it’s never about one player; it’s always about all of us together. Be the same person whether you win by 70 or if the game doesn’t go the way you want it to. What I tell my guys is you’re only as good as the last play.”

“I think humility needs to intervene,” said Jensen. “There needs to be a generation or a group of people who recognizes that the model needs to change. They need to break the cycle of behavior.”