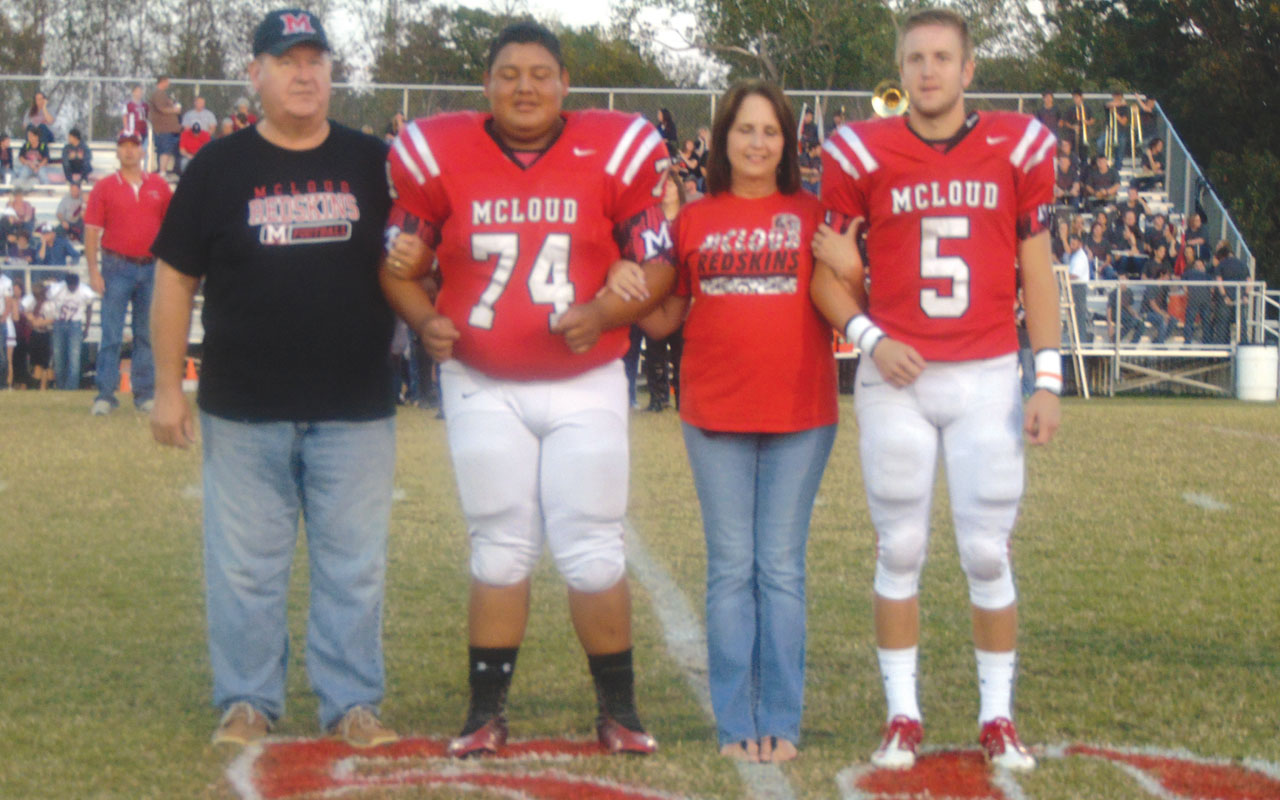 MCLOUD—Aaron Smith is a young man of few words, but he has a story that needs to be told. This sophomore at Rose State College is well on his way to success in life, thanks to foster parents who love him as their own.

Aaron entered the Department of Human Services (DHS) system at the age of 6, and was placed in nine different homes before he found the love and security of Val and Traci Gokey.  The Gokeys met Aaron when he was in 6th grade. Val, a counselor at McLoud High School, was his football coach and their son, Matt, was his best friend. When the family learned Aaron was walking to the public library after school every day, where he spent several hours waiting for his foster mom to pick him up after work, they asked permission for him to walk to Val’s office with Matt instead.

What the Gokeys didn’t realize at the time was that God had been writing them into Aaron’s story long before Aaron was born. One afternoon, Traci met a friend from high school for a semi-annual lunch. As the two conversed, they learned Traci’s lifelong friend was Aaron’s CASA worker. This opened the door for the Gokeys to become Alternate Care Givers for Aaron.

Then, in 2010, the friend informed Traci that Aaron needed to be moved once again. The family committed it to prayer, but soon knew that this was God’s plan all along.

“We had recently gone through Experiencing God at church,” explained Traci. “We realized God was inviting us to join where He was already at work.”

Transition into their family took time. Val and Traci wanted Aaron to feel like he belonged, but Aaron’s history of family trauma and disrupted home life made it hard for him to trust.

“Before all this happened in my life; before I went into DHS custody, I was pretty wild,” explained Aaron, “After a while I just held it all in and became quiet. I don’t remember being scared. I learned to go through the motions. Just go with the flow.”

During the adjustment, Aaron continued to see a therapist, and the Gokeys concentrated on providing him with a normal family life. As the oldest of eight siblings, Aaron assumed the role of caregiver during his family’s difficulties.

“He never really had the chance to just be a kid, and we wanted to give him that chance,” explained Traci.

They gave him the opportunity to participate in church, mission trips, sports, camps and other activities that help to foster success. Gradually, Aaron began to feel secure and confident. He settled into the family as a son and brother.

Aaron’s talent and love for football made him a star athlete on the field. He was selected to the All-District team. He even turned down a scholarship to play at Southern Nazarene University so he could concentrate on academics. He pays his own way to Rose State, where he maintains a 3.5 GPA. He plans to attend there one more year and then hopes to transfer to a four-year university and try out for football as a walk-on. He stays in shape lifting weights, and has lost 70 pounds since November.

The Gokeys wanted to adopt Aaron, but his birth family is still very important to him. Though all of his siblings now have forever families, Aaron still has close ties with them and with his grandmother. “His family loyalty always impresses me,” said Traci.

Aaron chose to officially remain a Smith, but the summer after his 9th grade year, Aaron made a decision at Falls Creek that makes him the son of his Heavenly Father and the brother in Christ to his earthly family.

When asked about the difference the Gokeys have made in his life, this burly quiet-spoken young man has to speak through tears.  “I honestly don’t know where I would be,” he said.

Val and Traci also fight the tears as they listen to Aarons emotional response. Val stated it well, “Prov. 3:5-6 says, ‘Trust in the Lord with all your heart and lean not on your own understanding; in all your ways submit to Him, and He will make your paths straight.’ We were apprehensive at first. All of the ‘what ifs’ kept playing in our minds.

“Because we trusted, God allowed us to make an impact on Aaron’s life. We have watched him mature and develop into a great young man.  The blessings far outweigh any of our misgivings.”

It was God’s story for Aaron and the Gokeys all along, and Traci added, “It’s made us a better family.”

For information on foster care and adoption call Oklahoma Fosters at 800/376-9729, or contact Oklahoma Baptist Homes for Children at 405/640-0622 or online at www.obhc.org/services/foster-care.