Ausberry, who has led the church for 24 years into numerous local and global initiatives, also is the current president of the National African American Fellowship of the Southern Baptist Convention. 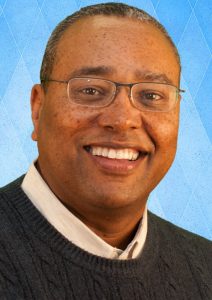 Pitman, senior pastor of Hope Church in Las Vegas, said in a statement to Baptist Press, “As a co-laborer in the Kingdom, I have watched this brother in Christ lead both his church and the National African American Fellowship of the Southern Baptist Convention in humility, and I have found him to be a servant leader who is passionate in his own faith and in seeing God’s Kingdom expanded and reflected through the SBC.”

Pitman relayed support for Ausberry from Fred Luter, a former SBC president, and other Baptist leaders in his May 22 statement.

“Marshal Ausberry is one of the most impressive Christians I have met,” Luter said. “He is committed to God, his wife and family, his church, and to his affiliation with the Southern Baptist Convention. Because he is a man of integrity, he is well respected by his peers as he now serves as president of the National African American Fellowship of the Southern Baptist Convention. Our convention will certainly benefit from the wisdom and leadership of Marshal Ausberry as our first vice president.”

John Upton, executive director of the Baptist General Association of Virginia, which planted the Washington, D.C.-area church, said Ausberry is “an excellent preacher and a wise leader of a growing congregation. As first vice president, he will fulfill the role with integrity and passion. Dr. Ausberry has been an excellent leader in BGAV life and a personal friend. I can say with confidence he will make himself accessible to all Southern Baptists.”

A.B. Vines Sr., the SBC’s current first vice president, said Ausberry is “a man of integrity and an exceptional leader. He will continue to bring unity and clear focus to our convention by helping us keep the main thing the main thing, which is to glorify our Lord and Savior, Jesus Christ.” Vines is senior pastor of New Seasons Church in San Diego and a former NAAF president.

According to data from the SBC’s Annual Church Profile, Antioch Baptist Church averaged 1,035 in worship in 2018; had 1,732 members; recorded 16 baptisms; reported $268,000 in Great Commission Giving encompassing Cooperative Program gifts as well as those to SBC entities and state and associational initiatives. The church’s CP giving of $26,000 reflected 0.8 percent of its undesignated receipts.

Pitman, in his statement to Baptist Press, said Ausberry has “mobilized the Antioch fellowship to join in God’s activity in its own community and around the world.”

Pitman said “Antioch Baptist’s heart to impact its community with the transformational love of Christ” has included a grant program through which its members have invested financially in 10 Title 1 elementary schools in their area, along with providing approximately $50,000 in scholarships to graduating high school seniors to aid their postsecondary studies.

Globally, Pitman said, Antioch has supported mission efforts to India, Russia, Zimbabwe and Canada; worked in the U.S. Virgin Islands in conjunction with NAAF, the Florida Baptist Convention and the North American Mission Board; aided hurricane relief efforts in the Virgin Islands and Puerto Rico; sent short-term teams in conjunction with the International Mission Board to Southeast Asia, East Africa and Brazil; and supported missionaries in Kenya, Haiti, Antigua and England.

The institute, with 15 current students, entails a three-year, six-semester curriculum encompassing 98 lessons each in New Testament, Old Testament and systematic theology. Several graduates subsequently enrolled in seminary studies and one is now pastor of a nearby Southern Baptist church. The institute also has enrolled students from a couple of nearby churches.

The National African American Fellowship under Ausberry’s leadership, Pitman noted, “continues to strive for increasing African American representation and involvement in Southern Baptist life, including missions, evangelism and church planting. Most recently, NAAF directed intentional support for strengthening and ministering to the churches in the Virgin Islands that had been adversely affected by Hurricanes Irma and Maria. In all of this, I see the hand of a brother committed to the Gospel and to leading people well to impact the world for the same Gospel.”

With NAMB, Ausberry also is an assessor on the mission board’s Send Network Assessment team in the capital region.

Ausberry holds doctor of ministry and Th.M. degrees in preaching from Gordon-Conwell Theological Seminary in South Hamilton, Mass.; an M.Div. from Virginia Union University’s Samuel Dewitt Proctor School of Theology; an undergraduate degree from James Madison University in Virginia; and a certificate in Christian apologetics from Biola University in California.

Ausberry and his wife of 39 years, Robyn, have three children and two grandchildren.

Art Toalston, a former editor of Baptist Press, is the author of "A Pandemic Proposal: Viral Vitality ... Hope for the Human Soul," an ebook available at Amazon, iTunes and other online platforms.