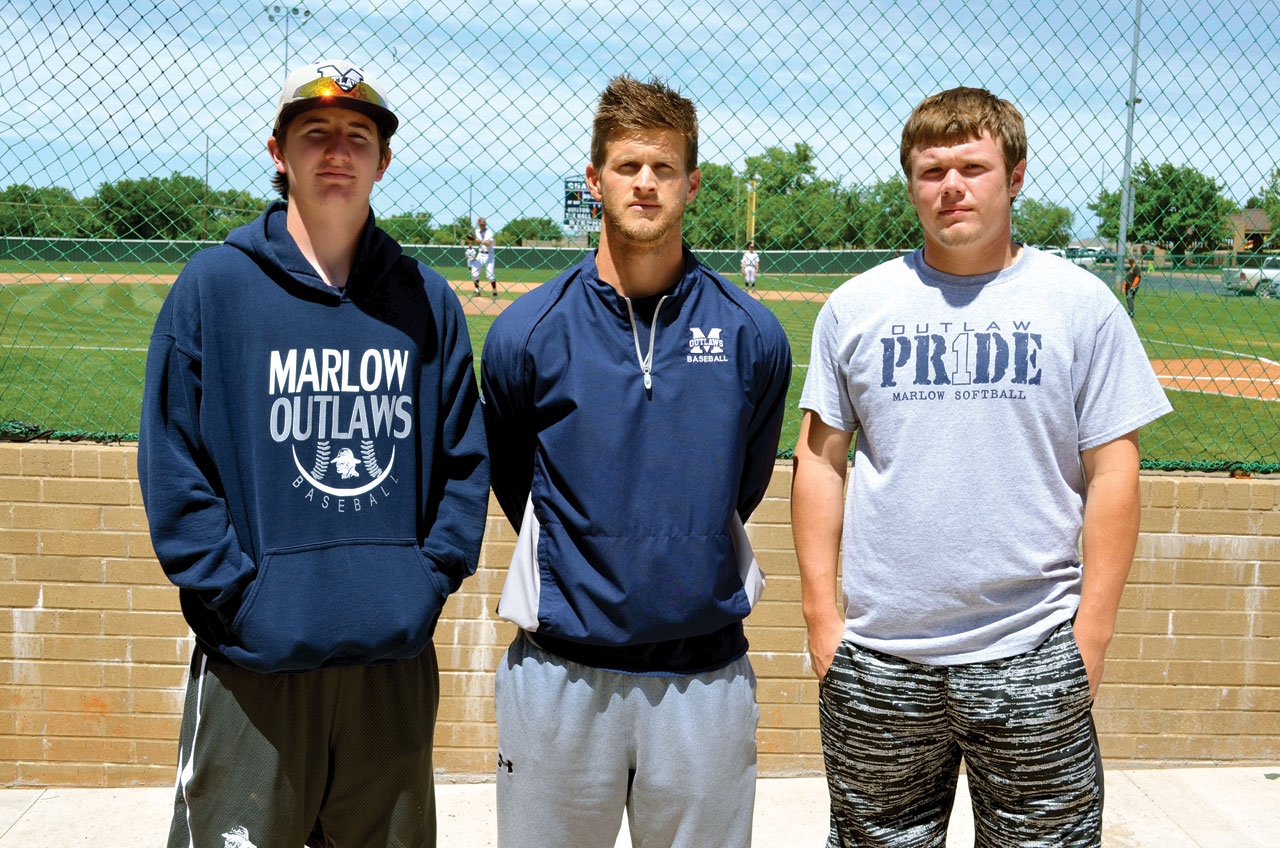 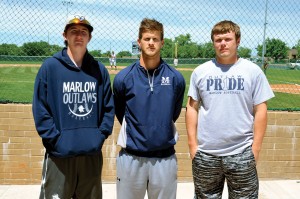 Marlow High School baseball coach Jeff Brewer, center, and his players Devin Crawford, left, and Beau Meshell share about their experience of hospitality and care offered by Oklahoma City, Putnam City while waiting for storms to subside, as the team was in Oklahoma City for a regional baseball tournament on May 6. (Photo: Chris Doyle)

MARLOW—Oklahomans take care of their own, regardless of what part of the state they might be from or what name is scrawled across the front of a uniform.

On May 6, an Oklahoma City church was the home of the Marlow baseball team for a few hours as they waited out severe weather and tornadoes.

The Outlaws had just wrapped up their regional tournament game against Heritage Hall when the storms started making their way towards Oklahoma City.

Realizing after driving a short distance they had forgotten a bag, the team returned to Heritage Hall to retrieve it.

It was about that time when Marlow head baseball coach Jeff Brewer received a phone call from his father informing him of the severe weather conditions.

“We didn’t see any need to drive into it,” Brewer said.

The team pulled into a restaurant, where Oklahoma City, Putnam City (PCBC) member Kayla Watson noticed the school logo-emblazoned activity bus, and heard of their plight. She invited the team to use the church as a shelter.

“They fixed some burgers and fed us,” Brewer said. “It worked out perfect for us. We’re very fortunate they were gracious enough to take us in.”

They stayed at the church for a few hours with the team making the most of it.

“I’ll remember doing karaoke with each other, and playing hide-and-seek in the dark,” team member Devin Crawford, a sophomore, said.

It turned into a good bonding experience for the team, bringing them closer together during an uncertain time.

“When the tornado sirens went off, it did get a little hairy,” senior Beau Meshell admitted. “Everybody was good with it, though. We were in a church, and we knew the Lord was going to take care of us.”

The church had nothing but praise for the team. “We had no problems whatsoever,” Brian Weaver, PCBC associate youth pastor, said. “They were very respectful.”

The team was back on the road about 9:30 p.m. and arrived home around 12:15 a.m. in a trip that normally would take a little more than an hour.

The experience was a good reminder to the team on what their focus should be on.

“We’re a God-centered team,” Brewer said. “He takes care of us when things happen. We’re fortunate Putnam City Baptist Church helped us out.”

“I told him we appreciated everything they did for the team,” Coffman said. “I thought it was pretty neat they would do something like that for a bunch of kids they did not know. They didn’t have to do it, but we are glad they did.”

“I thought it was really a class act for the superintendent to call and thank us,” Hulse said. “I could tell he was very appreciative. I know he had many other things going on, and I was really impressed he took the time to call.”

Todd Brooks is the news and sports editor for the Marlow Review.

View all posts by Todd Brooks