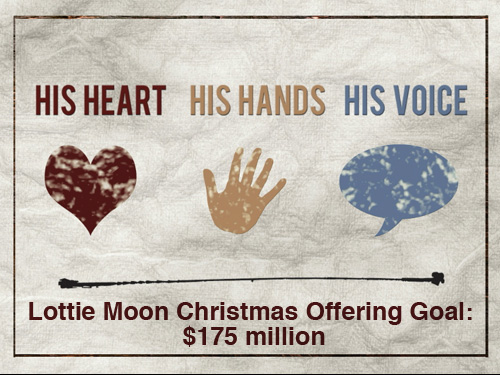 RICHMOND, Va. (BP)—Jesus gave His followers a task —to fulfill the Great Commission (Matt. 28: 18-19). He commissioned believers to be His heart, His hands and His voice to share the Gospel with the world.

Through praying for, giving to and going on mission, Southern Baptists have dedicated themselves to this legacy for more than 160 years.

Yet billions of people do not know Jesus as Lord. This calls for intentional prayer, sacrificial giving and direct responsibility for helping to reach the nearly 3,800 people groups in the world that have no active Christian presence among them. Learn how to adopt an unengaged, unreached people group at call2embrace.org.

More than 50 percent of the world’s population lives in urban centers. People are migrating into cities in ever-increasing numbers, and that migration brings unique challenges to reach peoples of the cities.

Jesus’ heart cried out for the peoples of the cities: “as (Jesus) approached and saw the city, He wept over it, saying, ‘If you knew this day what (would bring) peace —but now it is hidden from your eyes’” (Luke 19: 41-42 HCSB). Jesus reached out to help the hurting. He declared the Good News about the eternal peace He was offering.

Jesus’ followers are called to not just do missions but be missions—an extension of His heart, hands and voice. Through praying, serving and unprecedented giving, all peoples can hear the Gospel and have the opportunity to know Jesus as Lord.

This year, the Lottie Moon Christmas Offering national goal is $175 million, which will provide support for nearly 5,000 missionaries serving around the world. The Week of Prayer for International Missions is Dec. 4-11.

Give to the offering through your local Southern Baptist church or online at imb.org/offering, where there are resources for church leaders to promote the offering. Download related videos at imb.org/entirechurchvideo.