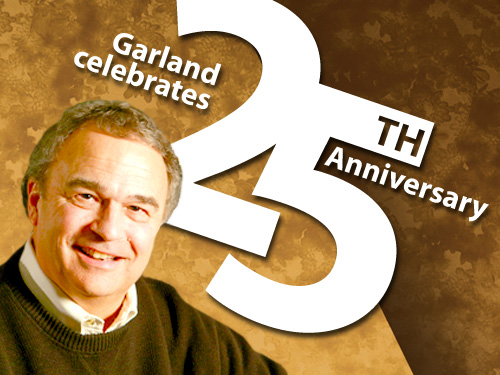 BROKEN ARROW—They say anniversaries and milestones offer an excellent opportunity to reflect and be grateful.

In October, the people of Broken Arrow, First, paused to celebrate an important one in their church, namely the 25th anniversary of service of Senior Pastor Nick Garland.

“In 1971, God reached out to the heart of a preacher’s kid from Tennessee and called that ‘PK’ to the role of a Pastor,” Garland recalled.

Through his education at the University of North Alabama and Southwestern Seminary, and pastorates in Arkansas and Alabama, the Lord led Garland to Broken Arrow in October 1986.

He has been there ever since. In a recent tribute event recognizing his 25th anniversary, members of Broken Arrow, First, said: “We are so blessed that the journey W.C. ‘Nick’ Garland began in 1971 led him to FBCBA. We are thankful to God for His provision in leading Brother Nick and (wife) Jenine to us and thankful for Brother Nick and Jenine’s sensitivity to the Spirit’s leading in their lives and for their willing hearts in being used by God to further His Kingdom.”

Like many Oklahoma Baptist pastors, Garland has led his congregation to reach thousands in the community and throughout the world. In his 25 years, more than 3,200 people have accepted Christ and followed Him in believer’s baptism.

“The realization of 25 years of ministry in one place hits at many levels,” said Garland. “The swiftness of the passing of a quarter-century of life and ministry and the joys of seeing many dreams fulfilled in that 25 years.”

When asked about the heart of his ministry, Garland said, “Evangelism has been the core of all we have done.  Whether it was local or global, the focus, thrust, and filter has been evangelism.  We are a strong Bible preaching, believing, Bible-based, Bible-studying church. So we have sought to have a strong biblical foundation for every ministry and activity.”

That drive, said Garland, led their church to seek the Lord in prayer often.

“Only God can energize His church for the work that He has equipped and called us to do,” said the pastor.

Reflecting on lessons learned in the 25 years, Garland enumerated the following. “First, be patient and wait upon God. He will do ‘exceeding, abundantly above all that we ask or think’ if we will allow Him to work in our lives as His children.

“Next, believe His Word.  He did not call for our opinion, but for our obedience. Thirdly, pray about everything. Spend time while studying God’s Word to underline passages that are good prayer promises.

The last lesson, perhaps the most important to Garland, is that the love of God is real.

“The longer one walks with Christ and works in His vineyard, the more we see the hand of God clearly at work.  He truly does love with an everlasting love that is personal and powerful,” Garland added.

There are many ways the people of Broken Arrow, First, have become leaders. They allowed God to provide a new church campus and structures that were built for $16 million debt free, and they were recently involved in making the nearby Baptist Village of Broken Arrow possible by donating the land.

The church also has seen more than 140 of its members go on a mission trip, leading to more than 1,000 professions of faith in the various places that the teams have gone. In addition, the church has planted other churches in nine locations overseas.

Garland is also pleased to report they give 9 percent of their budget to the Cooperative Program for missions.

Nick Garland is no self-made man, though. He was reared in a pastor’s home and believes God has been readying him for service all his life.

“My father had a gift in sharing the Gospel with others and had a love for global missions,” recalled Garland. “I became a pastor at 19 and God was preparing me for my life’s vocation.”

“Celebrating a 25th is truly a once in a lifetime experience,” he said.

Garland and his members see bright days ahead.

Echoing a favorite quotation of Garland’s, members said they believe, “With God, the best is always yet to be.”