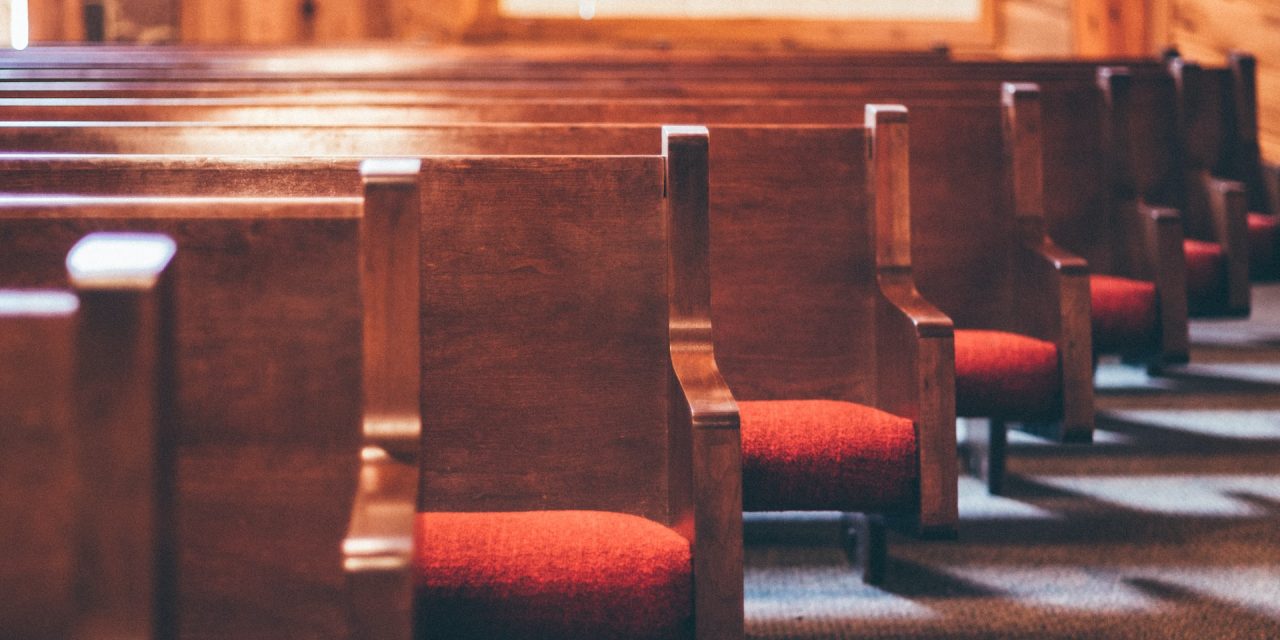 NASHVILLE, Tenn. (BP)—Almost every church in the U.S. is holding in-person services again, but some pre-pandemic churchgoers still haven’t returned. 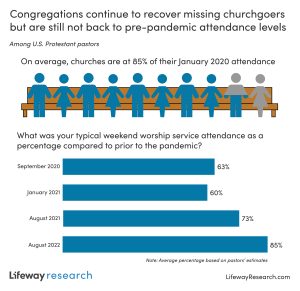 In August 2022, 100 percent of U.S. Protestant pastors (rounded to the nearest whole number) say their churches met in person, according to a Lifeway Research study. This continues the increases from the past two years of churches holding physical gatherings. In August 2021, 98 percent of churches gathered in person, after 75 percent reported the same in July 2020.

“While there are a handful of exceptions, we can definitively say that churches in the U.S. have reopened,” said Scott McConnell, executive director of Lifeway Research. “While masks began to rapidly disappear in many settings in 2022, churchgoers have not reappeared quite as fast.”

Despite churches returning to pre-pandemic levels of holding in-person services, not all churchgoers have followed suit. On average, U.S. Protestant churches report current attendance at 85 percent of their typical Sunday morning crowds in January 2020, prior to the COVID-19 outbreak. 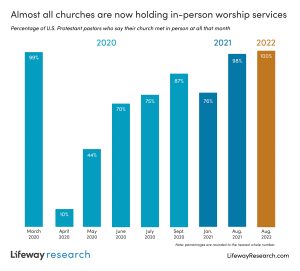 Despite falling below a full return, this marks the highest attendance levels in more than two years. In September 2020, the average church reported 63 percent of their pre-pandemic in-person attendance. Last August, the percentage climbed to 73 percent, before rising another 12 percentage points this year.

In February 2021, 91 percent of U.S. Protestant churchgoers told Lifeway Research that once COVID-19 was no longer an active threat, they planned to attend worship services at their church at least as much as they did prior to the pandemic.

Earlier this year, 34 percent of Christians said they attended a worship service four times a month or more before COVID, according to an additional Lifeway Research study. In April 2022, 26 percent said they currently attend that often. Slightly more than a third of Christians (36 percent) said they attended less than once a month before the pandemic. This year, that jumped to 43 percent.

“While some pre-COVID churchgoers have not returned to church at all, much of the decline in attendance is from people who are attending less often,” McConnell said.

While most U.S. Protestant churches still haven’t fully recovered pre-pandemic attendance levels, more congregations than before have now reached those numbers or even grown.

Most churches continue to be in the middle range—above 50 percent of their pre-pandemic attendance but below 90 percent. A quarter of churches (26 percent) say their attendance is more than 50 percent but less than 70 percent, while 31 percent report a congregation of 70 percent to less than 90 percent what it was prior to COVID-19.

Older pastors are less likely to report their church growing in attendance since the pandemic began. Around 1 in 6 pastors 65 and older (16 percent) say their congregations increased attendance since January 2020 compared to 25 percent of pastors aged 45-55 and 33 percent of pastors 18-44. Those in the Midwest (26 percent) and South (25 percent) are more likely to say they’ve grown compared to those in the Northeast (14 percent).

Evangelical pastors (29 percent) are almost twice as likely as mainline pastors (16 percent) to report pandemic attendance growth. Pentecostal (33 percent) and Baptist (28 percent) pastors are more likely to say they’ve grown since January 2020 than those at Presbyterian/Reformed (14 percent), Lutheran (13 percent), Restorationist Movement (10 percent) or Methodist (8 percent) churches. Non-denominational pastors are among the most likely to report growth (30 percent) but also the most likely to say their church is still less than 30 percent of pre-COVID attendance (14 percent).

The failure of churches to recapture all their pre-COVID churchgoers means even fewer churches reach 100 in attendance on a typical weekend. Now, 2 in 3 U.S. Protestant churches (68 percent) have congregations of fewer than 100 people, including 31 percent who have fewer than 50. A quarter of churches (24 percent) fall into the 100-249 range, while 8 percent of congregations host 250 people or more each week.

Still, the smallest congregations are among those most likely to have recovered to pre-COVID levels. Those who reported attendance of fewer than 50 in January 2020 (49 percent) are more likely to currently say they are at 90 percent or greater of those pre-pandemic levels than those with 50 to 99 (34 percent) and 100 to 249 (28 percent) in pre-pandemic attendance.

The phone survey of 1,000 Protestant pastors was conducted Sept. 6-30, 2022. The calling list was a stratified random sample, drawn from a list of all Protestant churches. Quotas were used for church size. Each interview was conducted with the senior pastor, minister or priest at the church. Responses were weighted by region and church size to reflect the population more accurately. The completed sample is 1,000 surveys. The sample provides 95 percent confidence that the sampling error does not exceed plus or minus 3.2 percent. This margin of error accounts for the effect of weighting. Margins of error are higher in sub-groups.

Photo by Andrew Seaman on Unsplash