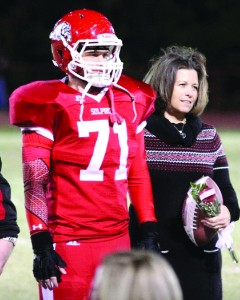 Ty Kiser with his mom, Janis, on senior night.

SULPHUR—He is currently a freshman at East Central University (ECU). Ty Kiser may not look much different from other students on the Ada campus, but the many who know his story can say he overcame much adversity in the past few years.

Kiser grew up enjoying hunting, horseback riding and especially football. His mother Janis said he had been playing football since he was in fourth grade and looked forward to playing in high school and maybe beyond. However, on a tragic day in June 2011, when Kiser was 15, those plans were greatly affected.

His father passed away in April that year, after battling cancer for more than four years. Sixty days after that mournful day, Kiser was shot in the chest in a hunting accident. He was airlifted to OU Medical Center in Oklahoma City, where doctors removed his lung and told his mother he had a 1-2 percent chance of survival. Kiser spent months in an induced coma.

On the week after his injury, he was supposed to attend a week at Falls Creek. An announcement about Kiser’s injury was made during one of the camp’s services, and more than 7,500 prayed for him that night.

Prayer support continued throughout the Sulphur community and beyond. Janis said their church, Hickory in Arbuckle Association, also was a great support for her family.

“It’s a little bitty church with a big ol’ heart,” she said.

Pastor Bill Leveridge of Sulphur, Crossway First has been involved with the Sulphur High School football team as the radio announcer and knew about Kiser’s potential to be a great player. He and Hickory’s Pastor Terry Neal, also one of Kiser’s coaches, spent much time at the hospital, and they both were there when the doctor announced Kiser’s lung had to be removed to save his life.

“I can’t tell you what happened to me physically, but (hearing the doctor’s announcement) just took my breath,” said Leveridge. “I just knew if he was to survive this, it would take a miracle.” 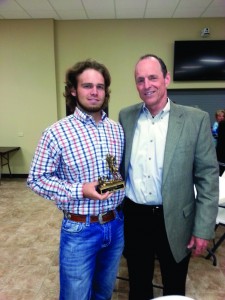 Kiser, left, with Pastor Bill Leveridge of Sulphur, Crossway First, after Kiser received the “Comeback Player of the Year” Award.

After six weeks in the trauma center, Kiser was coming out of his coma, and Janis said his first words were “Can I play football?”

All through his 90-plus days of physical therapy, Kiser emphasized he wanted to play football again. Many were skeptical, but there were those who encouraged him and kept his aspirations afloat, including Jim Dixon, Sulphur head football coach.

“We think he will be able to play next year,” Dixon told the local newspaper, The Ardmoreite, at a pep rally before the 2011 season, with Kiser making an appearance.

Dixon recently recalled how tragic, yet inspiring, the whole experience was for Kiser.

“It was a horrible accident, just a nightmare,” the coach said. “There’s no doubt in my mind that what healed him was prayer. There were so many people who were praying for him, and God answered those prayers.”

Kiser could not play in 2012, but he traveled with the team and stood on the sidelines. His senior year came in 2013, and with much persistence, he was determined to compete.

“’Mom, I want to play football, and this is my last chance,’” Janis said, recalling her son’s plea. “So we contacted the doctors, and they thought he was crazy. But when one of the doctors heard how he was getting in pretty good shape, he said if Ty would wear a Kevlar vest, he would release him to play.”

Football season arrived, and Kiser was out on the field training with his teammates.

“He came out and gave all he had,” said Dixon. “He was a good leader on the team as a senior. It was hard for him, but he never gave up.”

Drills of endurance were difficult for Kiser because of his limited breathing capacity, but he participated as best as he could. Dixon said Kiser played several games as a defensive end. Though he did not meet the potential he had prior to his accident, he still was an inspiration.

Last spring at Sulphur’s sports banquet, Leveridge presented a special award to Kiser, called the “Comeback Player of the Year.” This has been the only time such an award had ever been presented, and Leveridge said many agreed Kiser deserved to be acknowledged.

“The people of this community wanted this young man to be recognized for his valor and his grit,” Leveridge said. “Every step of the way, he was told ‘You’re not going to be able to do that.’ This kid would not quit until they finally told him he could play, and he did. He did not play a lot, but he did well when he was in there. It wasn’t everything he wished it would have been, but I think overall, he was overjoyed.”

Kiser will continue his studies at ECU along with the other students. He may not stand out on campus or be heralded for his past football achievements. But knowing what the power of prayer and the support of his church, family and friends can do, he is alive and exceeding expectations.