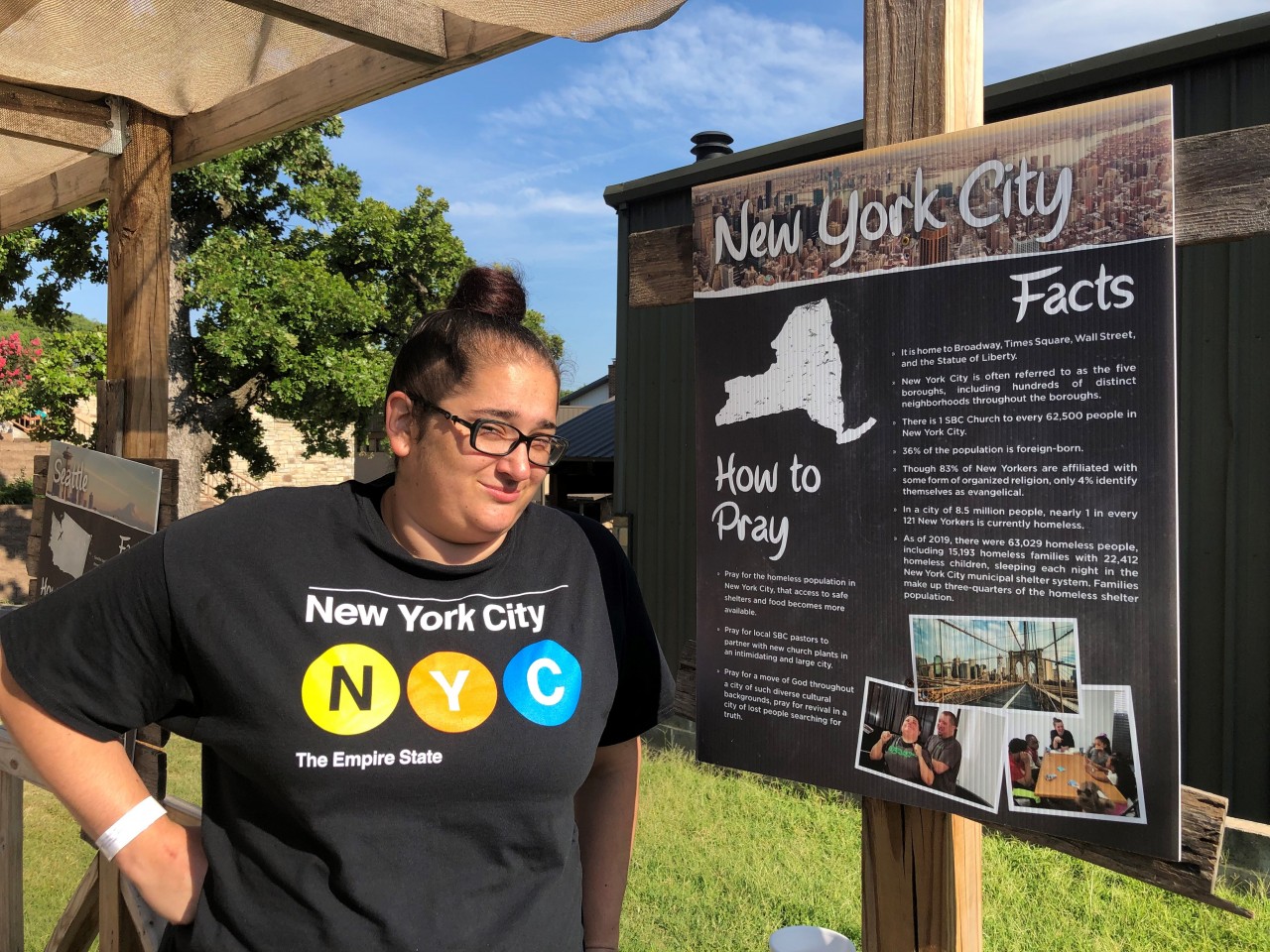 EDITOR’S NOTE: Jeremy Rowan shares a story of a young lady from New York whom his church met on a mission trip. Jasmine Torres visited Oklahoma this summer and got to spend time at Falls Creek Baptist Conference Center during one of the summer youth weeks.

KINGFISHER—Jasmine Torres grew up near Pelham Parkway in the Bronx, N.Y.  When her plane landed at Will Rogers World Airport, it was the farthest west she had ever been.  This journey to Oklahoma began three years ago when she met a mission group from Kingfisher, First who invited her to come experience Oklahoma.

Jasmine made a profession of faith in Christ not long after Jordan and Becky Sauceda planted Everlasting Church in New York City.  When mission teams come to help with the newly planted church, she is almost always one of the church members who will help show team members around the neighborhood and serve alongside them.

Upon arriving in Oklahoma, she ate at Taco Bueno and then headed to Falls Creek Baptist Conference Center, near Davis, to spend half of a week with the students who previously traveled to minister in her neighborhood.  She wasn’t sure what to expect from “Church Camp,” much less the largest church camp in the world. 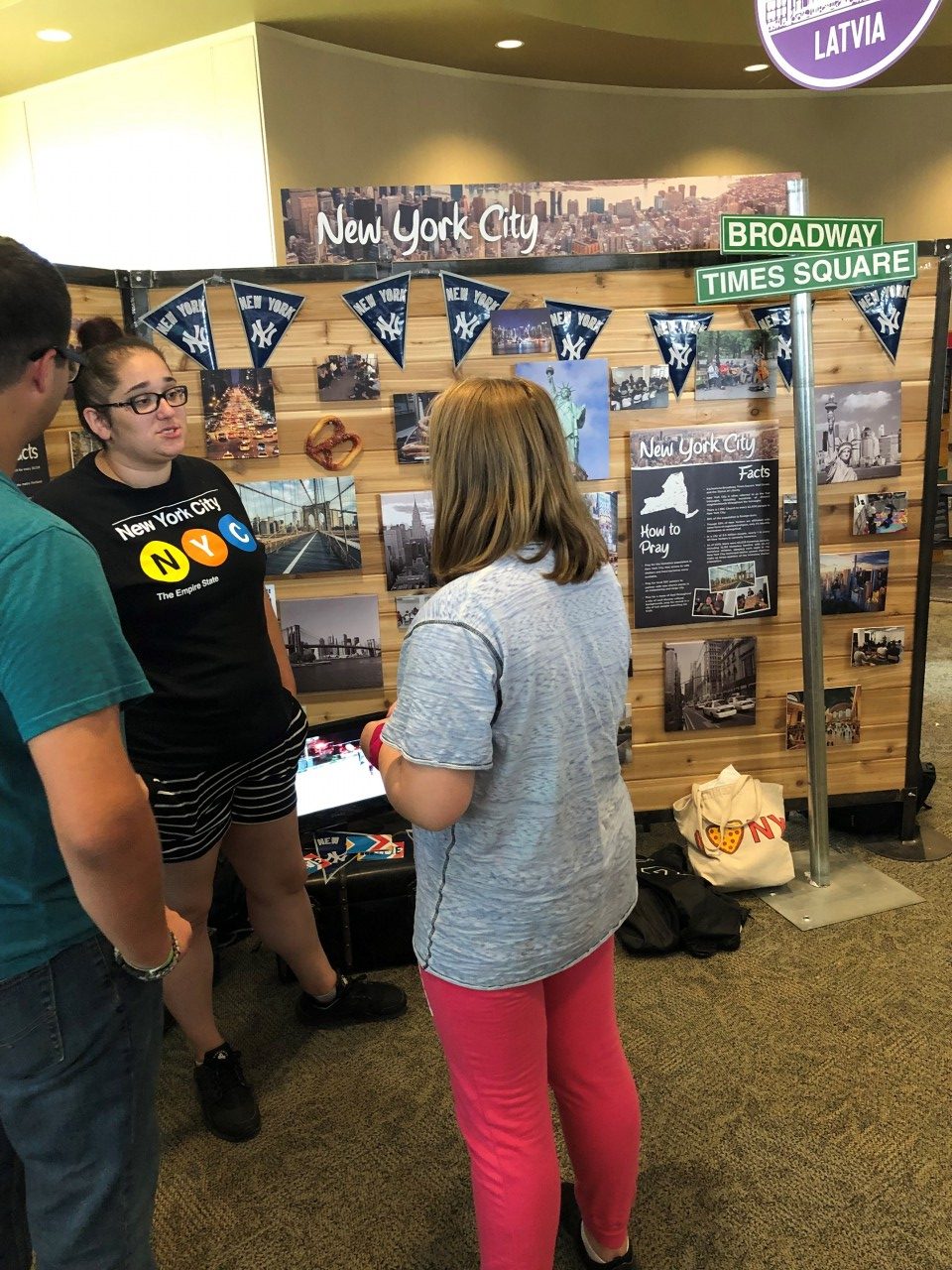 Jasmine talks with campers at the Missions Center at Falls Creek, where photos of her baptism in New York were displayed.

When she walked onto the rec fields to watch a kickball game, she was greeted with hugs from students and sponsors as she told us about seeing round hay bales for the first time in her drive from the airport.  She came here to spend time with her brothers and sisters in Christ from Oklahoma and saw more of them than she realized would be at Falls Creek.

In February, I had a conversation with Brian Baldwin about our mission work with Everlasting Church in NYC.  I connected him with Jordan Sauceda who began telling him about the work that began there nearly three years earlier when he and his wife moved to NYC to go and make disciples of “all nations.”

Jordan and Becky both grew up in Tulsa and attended Tulsa, Calvary.  Jordan surrendered to ministry and became a youth pastor in Texas before they moved their family to the Bronx, where their investment with people soon began to pay off, as they shared the love of Jesus with people, including Jasmine.

After Jordan and Brian visited about mission opportunities in New York, Brian asked me about helping to lead a Go Students mission trip to share the Gospel in the Bronx.  As we began working on details of this trip for July 2-8, 2020, our mission team from Kingfisher was preparing to spend spring break, serving alongside Jordan and Jasmine.

While we were there, we invited Jasmine again to come to Oklahoma, and this time she said yes.  We discussed times that would be good for us and for her, and it seemed to work out for her to come while Kingfisher, First was at Falls Creek.

We were excited to get to hang out with her on our turf and thought that the culture shock that we experienced in traveling to NYC would pale in comparison to what she would experience in coming here.  Her first worship experience in the Tabernacle, with Mike Romero leading worship and Ed Newton preaching, reminded her of Hillsong New York.  She thinks the Oklahoma heat is “rude,” but spent most of the first two days on campground outside, taking in all of the sights.

On Thursday night when Ed asked for those who feel called to ministry to come forward during the invitation, she went and surrendered her life to ministry.  The next day, Jasmine was in the Missions Center, talking to students about coming to New York, showing them pictures of the day she was baptized, and these pictures had been on display at the Missions Center throughout all the camp weeks at Falls Creek.

She encouraged them to go and serve in her neighborhood, to experience a part of New York that most people never get to see, but where God is changing lives as they experience everlasting life at Everlasting Church.

Jeremy is the student pastor at Kingfisher, First

View all posts by Jeremy Rowan